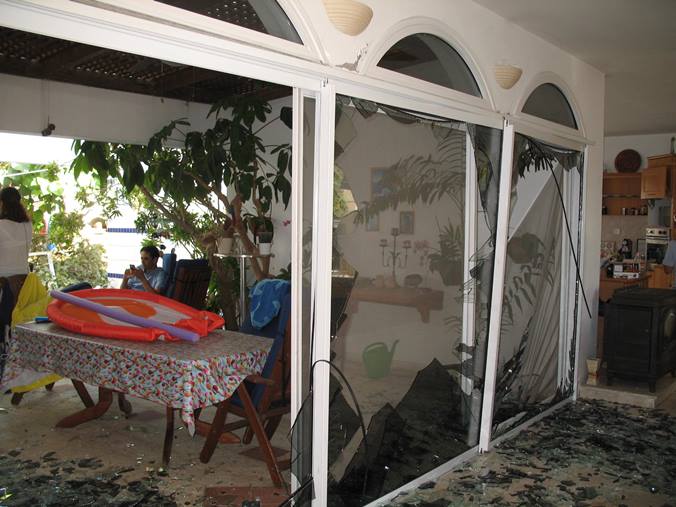 [Exclusive: Editor’s note: Winnipeg Jewish Review reporter Orli Avior, who lives in Ashkelon, was on the scene yesterday as a Hamas missile landed in her neighbour’s house, causing extensive damage. Her neighbor, a pediatrician, has a clinic attached to her home and miraculously there were no children in the clinic at the time, which is not the usual situation. Avior, a Command Sergeant Major (Ret.) in the U.S. Army, who made aliyah to Israel nine years ago and is the only Jewish woman to have served in Afghanistan, sent in this exclusive first-hand report below. Avior is not surprised that Israel has launched a ground invasion in the Gaza Strip.]

Around two o’clock yesterday afternoon, a red alert siren went off and I went into the Mamad, the safe room, in my apartment where I heard a two really loud booms. Then the siren went off again with more loud explosions a bit later and I heard ambulance sirens. It wasn’t long before I found out that a house was hit on the route that my husband Ariel takes on his daily walk. He was on his walk when the siren went off making me a bit worried about where he was.

The missile directly hit the home of Betty Suissa, a mother who is a pediatrician with a clinic attached to her home. Nissim Suissa the father works for the city of Ashkelon. Michael, her oldest daughter was called up for reserve duty, and Anat Suissa the teenage daughter, 18 years old, was at home on summer vacation from school.

When the Suissa home was hit Betty thankfully did not have any children in the waiting room of her clinic as she was making her rounds at the Barzilai hospital. How thankful we can be that there were no children at the clinic as I could see first-hand that the area where Suissa examines her patients who are children, as well as, the waiting room and rest room which are part of her clinic were destroyed by the missile, leaving a trail of shattered glass. The only one home at the time the missile hit was Suissa’s teenage daughter Anat who went into the safe room at the sound of the siren. (Days earlier a rocket landed in an empty lot between two houses across the street.) Anat had a feeling things were not right as she came out of the safe room and found much of the house was destroyed. All the rooms at the back of the house were damaged -with the sliding glass doors and windows smashed to smithereens.

Of course, I didn’t realized that as I ran out to get the pictures for the story and attend the scene, I had flip flops on. As I walked across the shattered glass to get to the back yard of the Suissa house I scraped my leg and cut my toe on the glass.

When the news got out of where the rocket hit, many people and international media showed up on the scene. Lucky for me I had some of my Winnipeg Jewish Review business cards and the Suissa family was willing to let me in as they want the rest of the world to know what it is that Israelis living in Southern Israel have been expected to put up with recently. No country in the world would tolerate its citizens being fired on an unrestrained way, without responding to Hamas attacks in order to protect its citizens and hopefully begin to change the situation on the ground so that the world would force Hamas to demilitarize. They want to keep pounding southern Israel so that Israelis will flee Sderot and Ashkelon, but those of us who live here understand that we cannot let this happen. Any sign of weakness on our part will only fuel Hamas’s appetite to wipeout the Jewish state. Those of us who live in the South have understood for a long time that if Hamas is not forced to demilitarize it would only be a matter of time before Tel Aviv would face the same situation as Sderot.

As the Suissa’s learned,the Iron Dome, while very effective overall, is not 100% fool-proof. Did it make an error by thinking this rocket was going to hit in one of the vacant lots near this home or did it miss this one in the air? Who knows?

Postscript: Israel has just launched a ground invasion of Gaza and I am not surprised–I had expected it several days ago.

Additional note: Yarden Machlof a 17 year old friend of Anat Suissa tells me that in four days 100 teens were to come to the south for a summer program of Diller Teen Fellows, a year-long project for teens from Israel and North America. Teens from all over the U.S. and Canada come to Israel and Israeli teens go to North America in Baltimore, MD. Due to the war they will not be coming to the south but will be diverted to the north. Last year, Anat Suissa was part of the Diller Teen Fellows.