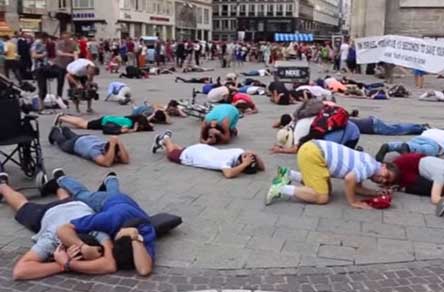 DISPATCH FROM STEFANIE HOTEL IN VIENNA

Last week, I learned suddenly that Austrian airlines resumed its flight to Vienna from Israel and I began to pack up quickly. Given the climate of anti-Semitism that has swept Europe since the outbreak of this current war between Hamas and Israel I decided to leave my bag that says Tel-Aviv that I usually travel with in Israel. I put on my Chai necklace but the Chai is on the back of my neck so that my hair covers it, while on the front I am wearing a pendant in the shape of a dove. I decided it would be safest not to be identifiably Jewish after reading the news of a pro-Palestinian rally with thousands of people against “Israeli terror” organized by the Union European Turkish Delegation at the Hofburg palace on July 21, 2014. Protesters (mostly Austrians of Turkish origin), also attacked Israeli soccer players (Macabbi Haifa) at a friendly match in Salzburg Austria, stopping play five minutes before the end, although no one was injured. http://www.dailystar.com.lb/News/Middle-East/2014/Jul-24/264969-protesters-attack-israeli-soccer-team-in-austria-over-gaza.ashx#ixzz39K4GiCv9.

At Ben Gurion airport as I left Israel, I noticed there were large English signs with arrows pointing to the nearest bomb shelter should a siren go off. “There were tourists who panicked here when a siren went off because they aren’t used to it and they didn’t know where to go,” an airport staff member told me candidly.

At the airport I was sitting at a coffee shop with my friend Orli when an airport staff member noticed an unattended blue knapsack nearby. We saw him on his walkie-talkie calling airport security. Orli and I got up to move away from the knapsack. Just then a light haired middle aged woman came running up to grab the sack, looking around apologetically at the onlookers.

On my Austrian airlines flight (which was cancelled even after Austrian airlines resumed flights,) I asked the stewardess about the cancellation. She explained that even though Austrian and Luftansa air resumed flights, the German pilots union was unhappy with the decision and as a result only if a pilot “volunteered” to fly the plane to Tel-Aviv would the flight not be cancelled. She was also a “volunteer” in that if she didn’t want to fly to Tel Aviv she didn’t have to, and would be assigned an alternate flight. She explained that Austrian Air has rejigged the flights so that none of the staff have to be laid over at all in Tel-Aviv. “We fly from Vienna to Tel-Aviv, land for an hour, to prepare the flight for new passengers as the incoming passengers get off, and then fly back immediately.”

“Thank you for volunteering,” I said. Please tell the pilot “Thank you” and tell him I’d like to meet him to thank him.

Sure enough at the end of the flight the pilot came out to meet me. I told him I was a journalist and asked him how many pilots like him are there who have “volunteered” to fly this plane. He answered “Let’s just say this isn’t the first time I’m flying to Tel-Aviv.” I took his answer to mean that there aren’t too many “volunteers” like him in Austrian airlines. I thanked the pilot for “not giving in to Hamas terror”, for not giving them a victory in an attempt to wage economic war on Israel. He posed for a photo with the stewardess.

As I snapped the photo, an Austrian airlines airport personnel came over and asked me why I was thanking the pilot. I explain that he “volunteered’ to fly the plane, because of Hamas rocket fire near Ben-Gurion airport.

“Oh,” she said, rather surprised. “I thought the bombs were just over Gaza. I didn’t realize there were any over Tel-Aviv.” As she said this, I began thinking that her uninformed perception is likely due to the Austrian media coverage which probably has spent very little time explaining that it was Hamas and incessant Hamas rockets that started this war. I begin wondering whether Austrian or any other European media has reported that the onslaught of Hamas rockets has caused 300,000 Israelis living in Southern Israel to flee their homes. Without this, and without the bomb shelters, there would be many Israeli casualties. [Editor’s note: The fact that there are 300,000 Israelis who have evacuated the South is the reason that I have always thought since the beginning of this war that Israel will want to agree to some sort of ceasefire framework that will return calm to the South enough that the evacuees will return such that children will be able to go back to school and not forgo their school year. This is what happened in the summer of 2006 when a ceasefire was negotiated just in time to preserve the upcoming Israeli school year.]

At the Vienna airport, I got a cab and the driver, Saed, realized I have come from Tel-Aviv. I told him I was a travel writer who happened to be sent to Tel-Aviv on assignment and he didn’t realize I was Jewish.This is in part due to the fact that Rhonda is an Arabic name, meaning Happy. (I rather doubt my parents realized they gave me an Arabic name, but at times like this it comes in handy.) Saed is a Muslim who comes from Macedonia originally, which was at one point under Ottoman rule.

“The Israelis are committing genocide on the Palestinian people,” Saed said. I decided I was not going to get into a full discussion of politics with him. But I asked him casually if he thinks the Jews have any right to a state, assuming they go back to the ’67 lines.. “No, No, it’s all Palestina. The Jews didn’t have a state for 2000 years so why do they need one now,” Saed said emphatically.”

“So the Jews should give back Tel-Aviv, you think?” I asked

Saed nodded and said, “Of course, it’s all Palestina.”

I tell Saed that I need to be taken to the Stefanie Hotel. As we get closer to it, he said “There’s lots of Jews that live around the Stefanie hotel. It’s a Jewish area.”

“Oh really, I didn’t know that,” I responded. (That was a bold faced lie. I have stayed there before and one of the reasons I chose this hotel is because it is right near an area with a lot of orthodox Jews whom I can speak to in Hebrew since I don’t speak German, has some restaurants with Israeli food,is not far from the old Jewish ghetto and the oldest synagogue inVienna that survived World War II.)

“I chose the hotel because it was a good price,” I told Saed.

As we pull up to the street of the hotel, Saed spots an orthodox Jew. “They wear those hats,” he says and the things at the side of their head. (For a second I was going to tell Saed that those side-locks are called “pais” but I caught myself, remembering that he didn’t know I was Jewish.)

“But they sure have money those people, the Jews,” Saed explained, noting how he drove a Jewish man on a private tour a day before that cost a lot of money.He added, of course, that he has nothing against Jews if they want to ride in his cab.

As soon as I got to the hotel, I took off all the tags from my luggage that showed I came from Tel-Aviv, thinking I didn’t need to advertise this in the event I was to meet others with views similar to Saed.

Not that I had to do this on entering the Stefanie Hotel, mind you. When I arrived, it was Friday evening, just before Shabbat, and there was a big kosher function with Vienna’s Chief Rabbi there. I heard a group of ultra-orthodox Jews in the lobby saying “Good Shabbas, Good Shabbas.”For a moment I forgot I was in Vienna–it felt like Jerusalem.

At night I saw a couple of young orthodox men and asked them in Hebrew if they can direct me to the synagogue in Vienna that survived the war. It’s on Juedngasse Street which is rather tricky to find unless you know the city well.

“Sure, we are going right by there. Follow us and we’ll show you where it is,”Chaim said.

Chaim and I spoke about Israel and I told he and his friend that I have just spent the last month there. They told me that the Muslim anti-Semitism in Vienna is more open now since the war.

Then Chaim asked me, “But wait, are you Jewish?”

“Yes, I am, didn’t you realize that given I speak Hebrew, just came from Israel, and asked you where the synagogue was?” I ask rather dumbfounded.

Ah, where have I heard that before?