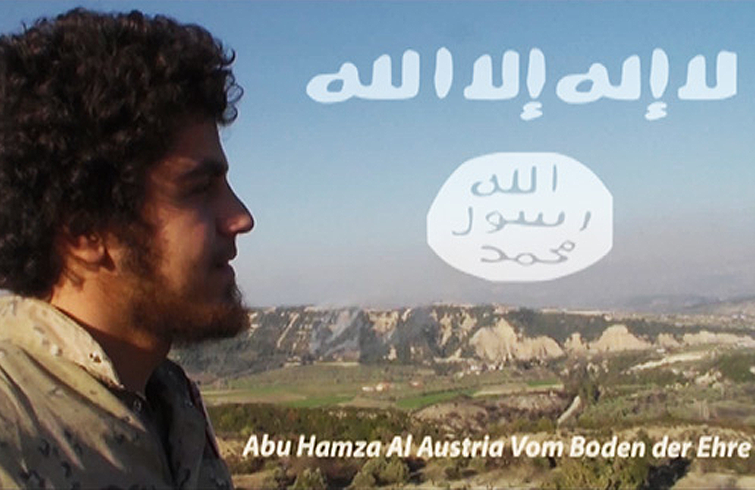 Austria figures prominently in a map produced by the IS that outlines the group’s five-year plan for expanding its caliphate into Europe, and has emerged as a central hub for jihadists seeking to fight in Syria.

“The spectrum of recruits for the conflict in Syria is ethnically diverse. The motivation, however, appears to be uniformly jihadist.” — Austrian intelligence agency BVT.

“We are proud that Allah has chosen us. We feel like lions.” — Austrian jihadist Abu Hamza al-Austria.

The Austrian government has announced plans to improve its intelligence gathering and analysis capabilities in an urgent effort to crack down on would-be jihadists in the country.

The decision by Austrian Interior Minister Johanna Mikl-Leitner to recruit 20 new intelligence officers to focus exclusively on the threat posed by radical Islam comes after police in Austria arrested nine Chechen immigrants who were on their way to wage jihad in Syria.

The move also comes amid growing concerns that Austria’s shiftless Muslim youth are becoming increasingly radicalized and vocal in their support of the jihadist group Islamic State.

The Chechens—eight men and one woman, ranging in age from 17 to 32—were purportedly planning to travel to Syria over a land route that would take them from Austria through the neighboring Balkans and on into Turkey. Four of the individuals were arrested in the southeastern Austrian province of Styria, and five others were detained in the province of Carinthia. Both provinces border Slovenia.

According to an analysis published by the newspaper Der Standard, Austria has emerged as a central hub for jihadists seeking to fight in Syria because Austria’s geographic location provides easy access to land routes through the Balkans.

Austrian intelligence officials say that most of the 130 Austrians who are thought to have travelled to Syria are Chechens. The rest are immigrants from Bosnia, Kosovo and Turkey. Approximately 60 Austrian jihadists are currently on the front lines, 50 have already returned to Austria and 20 have been killed in action.

The returning jihadists are “ticking time bombs,” according to Mikl-Leitner. Her concerns are echoed in a June 2014 report by the Austrian intelligence agency BVT, which is emphatic about the threat posed by returning jihadists. The document states:

“When fighters return from the warzone, their newly acquired combat skills, traumatic experiences and changes in behavior, plus the possibility that they have become highly radicalized, represent a considerable security risk for Austria. Those who return could become involved in proselytizing activities as well as in establishing new radical centers in which they could serve as instructors. Potential terrorist attacks could be perpetrated by so-called lone wolves but also by organized terrorist groups.”

The report also warns of the “exploding radicalization of the Salafist scene in Austria.” Salafism is an anti-Western ideology that seeks to impose Islamic sharia law in Austria and other parts of Europe. The document states:

“The number of young radicalized followers of violent Salafism in Austria continues to rise. In this context, the conflict in Syria is of urgent relevance for Austria, because systematic efforts are being made within Austria to radicalize and recruit people for the war in Syria.

“So-called hate preachers can have a decisive influence on the radicalization and recruiting processes by means of ideological and personal indoctrination. Jihad is offered as the only adequate means to solving disputes between Muslims and non-Muslims. In Austria, this targeted manipulation is achieved through conspiratorial performances by charismatic leaders. Young Muslims, who are seeking alternative perspectives due to life crises, are often submissive victims to these ‘radicalizers’ and ‘recruiters’ and are often fascinated by the prospect of armed jihad.”

Muslim students already outnumber Roman Catholic students at middle and secondary schools in Vienna, the capital and largest city of Austria, according to statistics compiled by the Vienna Board of Education (Stadtschulrat für Wien) and published by Radio Vatican website in March 2014.

The data—which show that Muslim students are also on the verge of overtaking Catholics in Viennese elementary schools—reflect an established trend and provide empirical evidence of a massive demographic and religious shift underway in Austria, traditionally a Roman Catholic country.

In the current school year, 10,734 Muslim students are enrolled in Viennese middle and secondary schools, compared to 8,632 Roman Catholic students, 4,259 Serbian Orthodox students and 3,219 students with “no religious persuasion,” the data shows.

The statistics show that the only Viennese schools where Muslims remain a distinct minority are in thegymnasium, advanced secondary schools that place a strong emphasis on academic learning rather than on vocational skills. Students graduating from a gymnasium are more likely than others to be admitted to attend university in Austria.

Official statistics also show that nearly 60% of the inhabitants of Vienna are immigrants or foreigners.

Meanwhile, Austrian jihadists are busy using social media to promote their cause, and to taunt counter-terrorism authorities. Before leaving for Syria in early 2014, a 19-year-old jihadist from Vienna named Firas Houidi wrote the following message on his Facebook page: “To the intelligence agent who may be reading this: Either you kill us or we continue, until the heads fly.” In mid-August, Houidi, who goes by the nom de guerre Firas Abdullah II, sent a follow-up “greeting” from Syria that included a photograph of an artillery shell in a box ready to be shipped to Austrian authorities.

In another message, Houidi, who has a Tunisian immigrant background, wrote that it is not necessary for Austrian Muslims to travel all the way to Syria to wage jihad against infidels. “Even if you do not emigrate and fight, then do it in Austria,” he wrote. “Allah also gives you the opportunity to wage jihad in Austria.” After his Facebook page was suspended, he reportedly opened another one under the name “Firas Abdullah III.”

Another so-called Austro-Islamist named “Abu Hamza al-Austria” produced an eight-minute recruitment videocalling on Muslims to wage jihad. He can be heard saying: “My name is Abu Hamza. I lived in Vienna until Allah called me and I obeyed his call.” He continues:

“My brothers and sisters. When I lived in Austria, I thought it would be difficult to leave because I was used to a life of luxury. I imagined that in Syria there would be no water, very little food and drink. This is not the case. We live in houses that exceed western expectations. We live in villas with fireplaces and swimming pools. We have everything here. We have no fear of death. We are proud that Allah has chosen us. We feel like lions.”

Austrian jihadists have also used social media to call on fellow Muslims to murder Yazidis, ethnic Kurdish non-Muslims, living in Austria. One image shows an Austro-Islamist brandishing a knife accompanied by a quote from the Prophet Mohammed: “We have come to you for no other purpose than to slaughter you.” Another jihadist writes: “All Yazidis living in Vienna, report to me. My knife is extra sharp.” Yet another writes: “Every dirty devil worshiper [the Muslim term for Yazidis], report to me, you will bleed for what you did to my brothers in Herford, in the name of Allah, you will bleed and be killed by my very own hands.” Evidently, he was referring to jihadistclashes with Yazidis in neighboring Germany in early August.

In Vienna, supporters of the jihadist group Islamic State [IS] have set up a “fan club” to promote holy war. They sell camouflage baseball caps emblazoned with the IS logo and T-shirts with terrorist messages in Arabic. Austrian newspapers have published photographs (here and here) of IS sympathizers posing in different locations throughout Vienna with messages of support. One reads: “One billion Muslims support the Islamic State.” Austrian jihadists have been seen wearing IS attire on Vienna subway trains. Others have postedcomments and photos on Facebook that glorify jihad and show weapons displays.

The propaganda has added significance because of Vienna’s historic role in preventing Islam from overrunning Christian Europe during the Siege of Vienna in 1529 and the Battle of Vienna in 1683. Like Spain, Austria figures prominently in a map produced by the IS that outlines the group’s five-year plan for expanding its caliphate into Europe. Today’s jihadists are simply fighting a new phase of a very old conflict.

Soeren Kern is a Senior Fellow at the New York-based Gatestone Institute. He is also Senior Fellow for European Politics at the Madrid-based Grupo de Estudios Estratégicos / Strategic Studies Group. Follow him on Facebook and on Twitter.