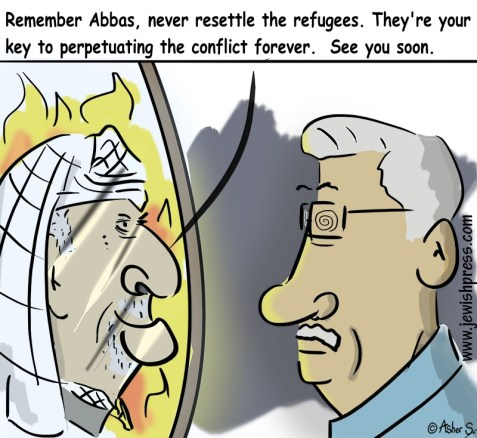 PA President Mahmoud Abbas has refused an offer by a senior Egyptian official to resettle “Palestinian refugees” in the Sinai, according to a report in the Middle East Monitor on Monday.

According to Abbas, the plan was first proposed in 1956 by Egypt, and was just put back on the the table again, in an attempt to help resolve the Arab-Israel conflict.

The idea was that the PA would receive a 618 square mile area adjacent to Gaza (the Gaza strip is 139 square miles) to resettle Arabs who claim refugee status. This would finally resolve the entire Palestinian refugee issue.

Abbas made it clear that he only wants to resettle refugees into Israel.

According to the report, Abbas proudly told the Fatah committee on Sunday that he refused the generous Egyptian offer to end the refugee problem.

Abbas said he refused the offer to settle them in the almost empty Sinai, as the plan “is absolutely unacceptable and the Palestinians will not accept it”.

Abbas clearly prefers to instead take money from the EU and the US to perpetuate the conflict.

Part of the PLO plan to eradicate Israel has always been founded on flooding Israel with “refugees”.

The refugees being referred to are primarily the 2nd and 3rd generation descendants of Arabs who were displaced from their homes when the Arab states attacked Israel in 1948.

At the time, the invading Arabs states told the Arabs in Israel to flee, so the invading armies could then wipe out the Jews unhindered. Others Arabs fled, thinking Israel would take revenge on them for what they did to the Jews over the years.

Most of these current “refugees”, and their parents, were born in Syria, Jordan, Lebanon and other Arab countries.

UNRWA (remember them?) has perpetuated these people as refugees instead of rehabilitating them in their birth countries, where in fact many of their grandparents and great grandparents also originated from before migrating into Israel looking for work, once the Jews began to rebuild the country’s economy.

No other UN agency passes on refugee status to descendants like UNRWA does.

During the post 1948 period, an equivalent number of Jews were also forced to flee the Arab countries they had called home for thousands of years, long before Islam came on the scene.

Many of those Jews moved to Israel, where they were fully integrated as Israeli citizens. These Jewish refugees and their descendants have not yet received financial compensation from the Arab countries they were forced to flee from.

In the early 1970s, Israel attempted to build modern housing projects to improve the living conditions of Arab refugee through resettlement and economic development. This plan was rejected by the Arab as they claimed that socio-economic solutions cannot solve the Palestinian problem.

For the Palestinian Authority, the refugee issue is a timebomb to be used to extend the conflict until they win.