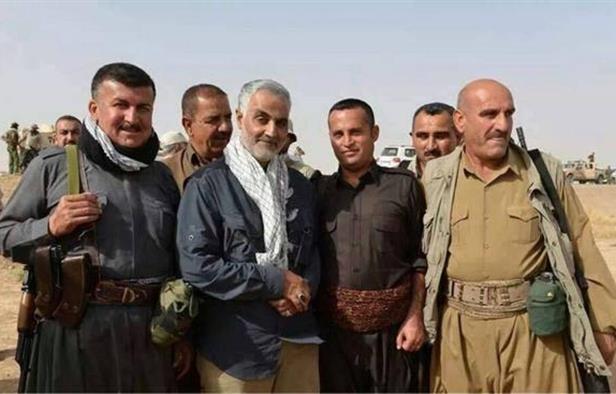 The Islamic Republic of Iran is managing an aggressive information campaign capitalizing on President Obama’s war against the Islamic State group (ISIS). Recognizing that Obama’s priority of combatting ISIS and Sunni extremism has created a huge opening for them, the Iranians have charged right through, high stepping all the way to the end zone. Tehran is pressing its advantage to portray itself as the indispensable manager of regional security, while also having a great time deriding the US and its regional allies. In that sense, the Iranian campaign is as much about messaging as it is about trolling.

With their information campaign, the Iranians are exposing publicly the extent to which the White House is pursuing them, even as they continue to talk trash to it. For the Iranians, this is designed to signal clearly to their regional rivals that they have the Americans in hand.

Take for instance the ongoing series of photo shoots Qods Force commander Qassem Soleimani has been doing in Iraq. Soleimani models in different settings — under the cover of the US Air Force. There’s the jovial Hajj Qassem dancing, weapon in hand, with Iraqi forces. Then there’s Soleimani the General visiting his men on the front, shaking hands with Peshmerga from the Patriotic Union of Kurdistan or with fighters from the Shiite militias he runs. Hajj Qassem also sports different styles from one photo shoot to the next — though his Palestinian-style black and white keffiyeh is always wrapped around his neck; after all, he is the commander of the force named for Jerusalem. The latest is the cool special ops look, in black fatigues complete with his cap turned backwards.

Although the White House had sent unmistakable signals about its desire to work with the Iranians, it also was concerned about not angering Sunni regional states, whose participation in the coalition it needed. Soleimani’s photo shoots were designed to make clear to everyone in the region that not only were the Iranians and the Americans in alignment, but also that the Iranians were the real force on the ground. Hence, US air power serves only to shore up the Iranian order.

Iran’s trolling extends beyond Iraq to the other theater where Washington and Tehran have had a tacit understanding: Lebanon. Earlier this month, the Iranians set in motion a play centered around support for the Lebanese Armed Forces (LAF) in its role against Sunni armed groups. At the end of September, the secretary of Iran’s Supreme National Security Council Ali Shamkhani, accompanied by Deputy Foreign Minister Hossein Amir Abdollahian, arrived in Beirut where he met Lebanese Prime Minister Tammam Salam as well as Hezbollah chief Sayyed Hassan Nasrallah. Following his talks, Shamkhani declared that Iran was ready to offer military aid to the LAF, specifically to help it fight “extremist takfiri terrorism” in the border region with Syria. The Iranian ambassador to Lebanon Mohammad Fathali followed up on the matter and met again with Salam, very publicly underscoring the seriousness of Iran’s offer.

This was a carefully choreographed production, supported by local pro-Iranian media. The Iranians know full well that they were putting Salam and his government in an impossible position, especially with Saudi Arabia.

The Saudis have already pledged $3 billion to Lebanon, part of which is to be used to purchase French weapons systems for the LAF. But the deal continues to be delayed. Thus, it was a perfect opportunity for Iran to show up the Saudis — and the Sunnis more generally — and present the Iranians and their allies as the only genuine supporters of the Lebanese state. The Iranians, it was reported in the pro-Hezbollah Al-Akhbar, deliberately specified what types of weapons they were ready to provide, free of charge, as soon as the Lebanese government consented. They also offered to provide training. The objective was to contrast the Iranians’ concrete offer with the yet unfulfilled Saudi promise.

But the Iranians also wanted to force Washington to reject their aid to the LAF. It was no coincidence that it was Al-Akhbar which revealed that the US privately put significant pressure on the Lebanese government against accepting the Iranian offer. Iran’s Abdollahian seized on that to chastise the Americans on Hezbollah’s Al-Manar TV, calling on them “to back the armies of regional states which are battling terrorism.”

The Iranians knew that the US would oppose their offer to arm the LAF. They also knew that the Lebanese government could not accept it either, as it would be, for one, a direct affront to the Saudis. The whole Iranian campaign, as retired Israeli Brigadier General and Hezbollah scholar Shimon Shapira put it to me, was “a wily trick.” They orchestrated the whole affair, framed it, and controlled the flow of information about it. Also, and perhaps more to the point, it was an irresistible way for them to troll the Americans.

The trolling goes all the way to the Supreme Leader, Ali Khamenei. Last month, Khamenei disclosed that the Obama administration had asked Iran to cooperate in the fight against ISIS. But Khamenei refused because the Americans “had dirty hands.” Khamenei can afford to publicly spit in Washington’s face because he recognizes the White House’s desperation to cut a deal with him. He also knows that the US administration will continue to back the Iranian order in Lebanon, as well as in Iraq, no matter what he says against it. The US will provide the LAF with military aid regardless, and continue to look the other way as the LAF works hand in glove with Hezbollah.

Secure in the knowledge that Obama has aligned with Iranian interests, Khamenei and Soleimani are obnoxiously rubbing the Sunnis’ noses in the dirt: We are on the ground with our allies, and we offer them real support. What’s more, not only are the Americans running after us — offering concessions in the nuclear negotiations and begging us to join their coalition — they are also publicly saying that you, not we, are the problem in the region.

In other words, the Iranian messaging campaign is about spiking the football and celebrating in the end zone.

Tony Badran is a research fellow at the Foundation for Defense of Democracies. He tweets @AcrossTheBay.

Michael Kuttner - September 25, 2020
Last Pesach (Passover) we experienced the first taste of life in the shadow of a lockdown. These current Chagim (Festivals) of Rosh Hashanah, Yom Kippur...