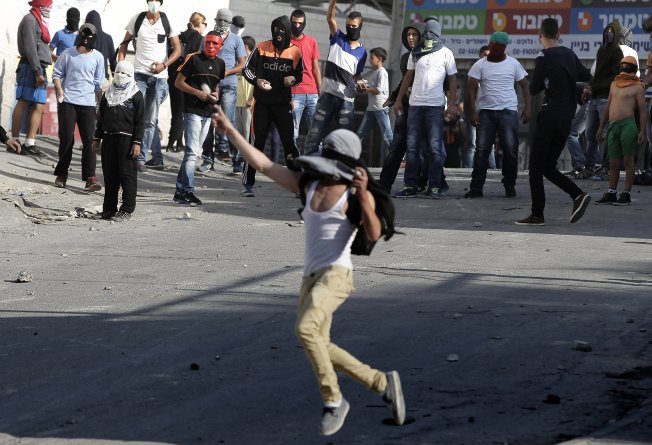 The deterioration of the security situation in Jerusalem cannot be understood only on the Israeli-Palestinian level; it is umbilically connected to the chaos in the Middle East and to the great struggle between the moderate Sunni regimes and the Muslim Brotherhood, which seeks to make the Jerusalem issue a rallying cry of the “Arab Storm.” The Brotherhood’s strategy hopes to unite all of the region’s Islamic movements around the idea of the Muslim Caliphate with the Al-Aqsa Mosque as its hub.

As demonstrated during Operation Protective Edge, the Brotherhood flaunted the banner “the siege of Gaza” to incite European Muslims to demonstrate in the streets with their leftist allies, thereby advancing the status of Islam on the Christian continent. Today, the Muslim jihadists use the “Save Jerusalem” campaign to again bring millions of agitated Muslims into the streets of Europe.

Before the recent hit-and-run terror attack on a Jerusalem light rail platform that killed an American-Israeli infant, the head of Hamas’ Political Bureau, Khaled Mashal, published a special announcement calling “on our people to hasten immediately to defend Jerusalem and Al-Aqsa, and on the Muslim nation to send a painful message of rage to the world that the Palestinian people and with them the Arab and Islamic nation will not keep quiet about Israeli crime.”1 Thus, in Hamas’s view it is the Jerusalem issue that can place the Palestinians at the forefront of the revolution unfolding in the Arab world, and of the Muslim awakening in Europe.

A Call to Muslim Faithful to Converge on Jerusalem

The clarion call of Al-Aqsa was sounded by the eminent Muslim Brotherhood jurist, Doha-based Sheikh Yusuf al-Qaradawi, when in Cairo’s Tahrir Square in February 2011, immediately after the ouster of President Mubarak, he called for Al-Aqsa’s liberation. Subsequently, he published a book titled Jerusalem: The Problem of Every Muslim.2 In the introduction, the preeminent scholar of the Muslim Brotherhood says, “O nation of Islam, arise, the hour has come, and the hour of danger beckons – to Jerusalem, to Jerusalem – Al-Aqsa, Al-Aqsa!”

Sheikh Qaradawi got into a bitter polemic with the head of the Palestinian Authority, Mahmoud Abbas, after Abbas called to inundate Jerusalem with massive Muslim tourism so as to preserve its Muslim nature in the face of  the “Judaization of the city.” Sheikh Qaradawi has ruled that visiting Jerusalem is forbidden so long as it is under Israeli occupation;3 Jerusalem must be liberated by force and not by “tourism.”4

The leader of the northern branch of the Islamic Movement in Israel, Sheikh Raed Salah, who belongs to the circles closest to Sheikh Qaradawi,5 stated that “Jerusalem is the capital of the imminently approaching Islamic Caliphate.”6

In monitoring Hamas’s websites, one gets the impression that pressure to sow discord in Jerusalem greatly intensified after the overthrow of former Egyptian president Mohamed Morsi, the crackdown on the Muslim Brotherhood there and its designation as a terrorist movement.7 Meanwhile, a crisis erupted between Saudi Arabia and Qatar over the funding of the Brotherhood branches in the Arab world, including Hamas, based on the claim that these are terror organizations.8 Presumably, Qatar tried indirectly to help the Brotherhood in Egypt by inspiring support for them on the Jerusalem issue. It is also evident that in Syria, Qatar has funded an attempt to establish terror groups that put Jerusalem at the top of their concerns, such as the “Al-Aqsa Army.” The fact that Khaled Mashal is living in Qatar has helped the Qataris realize that by ratcheting up the Palestinian issue it can reignite the passion of the Arab masses throughout the Arab world in support of the Muslim Brotherhood. As we saw in Operation Protective Edge, Qatar dictated a tough line against a ceasefire in the hope of bringing the Arab masses out into the streets. Qatar failed in the Arab world – but succeeded in Europe.

The fact that the Palestinian Authority has joined Hamas’s campaign to “Save Al-Aqsa,” notwithstanding the agreement that the Authority has signed with Jordan, will likely lead to difficulties between the latter two. King Abdullah has harshly castigated Israel on the Jerusalem issue;11  it must be understood that he himself is in distress.

During the two previous intifadas, Fatah of Jerusalem in fact took pains to exclude Jerusalem from the sphere of the conflict. Fatah sources say it was indeed the Fatah Tanzim in Jerusalem that told Arafat, “The interest of the residents of east Jerusalem in steadfastness – sumud – requires excluding them from the sphere of violence.” Hence, whereas the West Bank and Gaza engaged in terror, the Fatah Tanzim made the struggle an issue of sumud, such as safeguarding illegal construction; and even though the Second Intifada was dubbed the “Al-Aqsa Intifada,” Fatah took care to distance it from the holy place.

Today, the situation is the opposite: quiet Gaza is licking its wounds, the West Bank is also – relatively – quiet, while most of the focus is on Jerusalem. The main reason is a drastic decline in support for Fatah in Jerusalem, so that it is the Islamic movements such as Hamas and the international Hizb ut-Tahrir movement, which advocates a caliphate, that are directing the events. For Fatah there is nothing left but to be pulled along by Hamas.

With an eye to the seventh Fatah conference, planned for the end of the year though its date has not yet been set, Abbas met with members of the “Jerusalem district” of Fatah. Fatah sources in Jerusalem say that the makeup of the cadres has been changed so that “street punks” and even the “underworld” have been recruited to foment an intifada in Jerusalem. They have demanded payment for their activity but so far no budget has been provided to them.  Legal costs for those arrested are supposed to have been paid, but receipt of the funds is not certain.

Fatah’s Silwan (Jerusalem) branch was quick to glorify the hit-and-run killer of the three-month-old American-Israeli baby, Chaya Zissel Braun, posting an obituary for the murderer on its official Facebook page, and also using the words “heroic Martyr.”12 On the issue of funding Fatah activity in Jerusalem, eyes are turned to Qatar, the great financier of all the movements that are undermining regional stability, including in Israel. The large sums evidently being used by the websites of Hamas and the Muslim Brotherhood to wage the Jerusalem campaign indicate that much Qatari money has already flowed their way, and Fatah is now waiting in line.

Fatah’s very weak standing in the Al-Aqsa compound was apparent in the attack –wild to the point of life-endangering — on Palestinian religious affairs minister Mahmoud al-Habash when he visited the Al-Aqsa Mosque at the end of June this year. His attackers were Hamas and Hizbat ut-Tahrir men, and the Palestinian Authority’s security forces had a very hard time rescuing him. 13 The joint attack also conveyed a message that these two movements, which have struggled over hegemony on the Mount, have reconciled and are now acting in unison.

Yet everyone is competing for Qatar money – a fact that only spurs local groups towards greater levels of violence. Fatah’s joining of the Al-Aqsa campaign as a wagon hitched to fundamentalist Qatar may well herald a takeover of Ramallah by the radical Islamic movements – unless the Palestinian Authority regains its bearings in time.

5 At one point it was reported that Sheikh Raed Salah had attacked Sheikh Qaradawi for a ruling that forbade tourism in Jerusalem. Sheikh Raed Salah hastened to publish a special announcement denying this; on the contrary, he recognized Sheikh Qaradawi’s authority “as head of the World Federation of Muslim Scholars.” He supported the sheikh’s visit to Gaza in lieu of Jerusalem because “Gaza has already been liberated.” http://www.bldtna.com/art,48852

9 Even after the Palestinian Authority joined UNESCO, Jordan forced Ramallah to ratify Jordan’s status as custodian of Al-Aqsa and as the representative of Jerusalem in UNESCO. http://kingabdullah.jo/index.php/en_US/news/view/id/10779/videoDisplay/1.html

The Role of Hamas and Fatah in the Jerusalem Disturbances