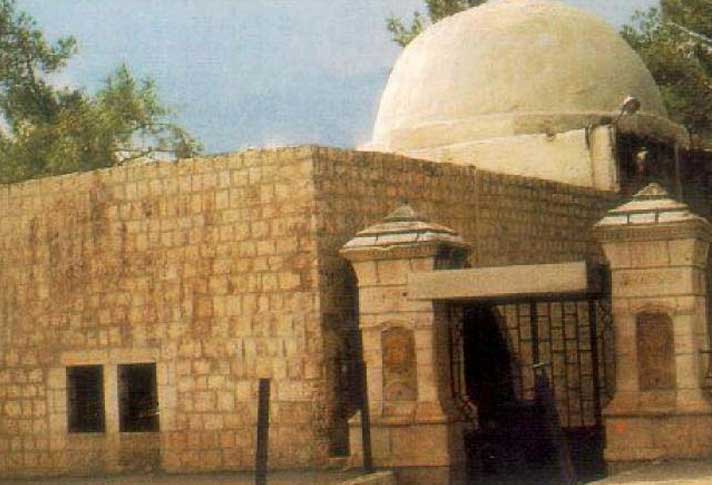 On the 11th of Heshvan, which this year falls on November 4, Jews observe the “yaarzeit” memorial for Rachel, the Biblical matriarch who bore Joseph and died in child birth as Benjamin was born.

As part of our agency’s continuing reportage of the PA school books now used in the UNRWA educational facilities, funded by the US, the EU and other western nations, we have come across a newsworthy phenomenon: UNRWA schools now teach that Rachel’s tomb is a shrine to a Moslem.

This is consistent with PA educational policy, which does not recognize any area in any part of Palestine, between the Mediterranean Sea and the Jordan River, as Holy to Jews. UNRWA students learn that the Western Wall, the Temple Mount in Jerusalem and the Cave of the Patriarchs in Hebron are exclusively holy and special to Moslems, and devoid of anything Jewish.

However, after the founding of the PA in 1994, the initial Palestinian Authority textbook recognized Rachel’s tomb, described as “Qabr Rahil” in a chapter about Bethlehem (pp. 87-90) in a paragraph titled “the most important historical and religious sites” (pp. 88-89), second to the Church of the Nativity. That text, on top of p. 89 is translated as: “Rachel’s Tomb: The mother of our lord Joseph and the wife of Jacob, peace be upon them both”. The textbook in which this sentence appears is titled “Palestinian National Education” for grade 6 and it was published by the Ministry of Education of the Palestinian National Authority in 1996.

However, The Palestinian Authority Ministry of Education has now transformed the “Tomb of Rachel” into “The Mosque of Bilal bin Rabbah” in the “National Education” textbook which is used by the 492,000 students in the UNRWA camps for grade 7.

In the chapter titled “Attempts at Obliterating the Palestinian Heritage” (pp. 54-57) there are features on p. 54 – photos of four places of which one is Rachel’s Tomb which the PA subtitled as “the Mosque of Bill bin Raba (Bethlehem)”. On p. 55, in a sub-chapter titled “The attempts at obliterating the Palestinian heritage include the following manifestations:” one can find the following: “The attempt to Judaize [tahwid] some of the Muslim religious places such as the Ibrahimi Mosque [the Cave of the Patriarchs] and the Mosque of Bilal bin Rabbah (near Bethlehem)”.

On p. 56, there is a tendentious paragraph which declares that: “Several Palestinian, Arab and Islamic centers and associations were established and they work to revive the Arab-Palestinian heritage in order to keep Palestine, and Jerusalem specifically, Arab”.

The Palestinian Ministry of Education has also issued educational pamphlets about Palestine and its “heritage”, such as: the Al-Buraq Wall – the Western Wall, the Mosque of Bilal bin Rabbah – Rachel’s Dome [Qubbat Rahil]”. At the bottom of the same page there are four questions for all students to answer. No. 2 reads: “Give the names of mosques and [other] Muslim and Christian religious sites of which the features the Israelis have tried to change”.

On p. 57 there is an assignment in which the student is requested to write “Yes” or “No” next to various statements.

No. 3 in this assignment reads: “The holy site of Bilal bin Rabbah is located near Bethlehem”.

As for Bilal bin Rabbah, he was an Ethiopian (male, not a female) slave in Mecca who heard Muhammad preaching there and became a Muslim.

He was then severely tortured by his master but stayed a devoted Muslim. One of Muhammad’s companions, Abu Bakr, bought and freed him and Muhammad made him the first muadhin (caller to prayer).

Some sources say that he accompanied Caliph Omar on the latter’s trip to Jerusalem following its conquest in 636 and on their way back the time of prayer came and he called to prayer at the place that was always known as Rachel’s Tomb – until the Palestinian Authority arrived on the scene.

An aside: These new PA textbooks were financed by Ireland, Holland, Belgium and Finland. Italy had initially committed itself to help finance the new PA school books.

When I showed the new school books of the Palestinian Authority to Ehud Olmert, when he was Mayor of Jerusalem, he said, curtly, that we will teach what we want and they will teach what they want”

Dr. Arnon Gross did the research for this article. Dr. Groiss holds a PHD in Islamic Studies from Princeton, and has worked as senior correspondent for the Arabic language service of the Israel Broadcasting Authority for the past forty years.