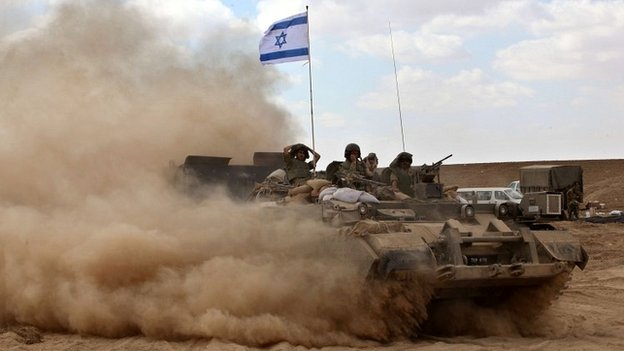 The U.S. military has been studying the war between Israel and the Gaza Strip.

The Joint Chiefs of Staff approved an examination of the
50-day war between Israel and Hamas in July and August 2014. They said the
Defense Department sent a delegation to Israel for briefings on the war
against Hamas tunnels and rockets.

“We sent a team of senior officers and non-commissioned officers over to
work with the IDF [Israel Defense Forces] to get the lessons from that
particular operation in
Gaza,” Joint Chiefs chairman Gen. Martin Dempsey said.

In an address on Nov. 6, Dempsey said the Pentagon team arrived in
Israel in August 2014 in the aftermath of the war. He said the team sought
to determine the effectiveness of Israeli anti-tunnel and rocket operations.

“They [Hamas] turned it very nearly [into] a subterranean society,”
Dempsey said.

The Pentagon team was also briefed on Israeli efforts to reduce civilian
casualties in the Gaza Strip. Officials said the U.S. officers were told of
Hamas’ use of civilians as shields amid the Israel Air Force strike campaign
against rocket launchers.

“I actually do think that Israel went to extraordinary lengths to limit
collateral damage and civilian casualties,” Dempsey told the Carnegie
Council for Ethics. “In this kind of conflict, where you are held to a
standard that your enemy is not held to, you’re going to be criticized for
civilian casualties.”

The remarks by the Joint Chiefs chairman contrasted with repeated
criticism by the administration of President Barack Obama of Israel’s
conduct of the war. In August 2014, Obama ordered the suspension of all
military supplies to the Jewish state, including the AGM-114 Hellfire air-to-ground
missile.

Dempsey said the Pentagon studied Israeli techniques to warn civilians
to leave combat zones. One technique was the use of dropping a
non-explosive device on homes believed occupied by Hamas or Palestinian
fighters.

“The IDF is not interested in creating civilian casualties,” Dempsey
said. “They’re interested in stopping the shooting of rockets and missiles
out of the Gaza Strip and into Israel.”