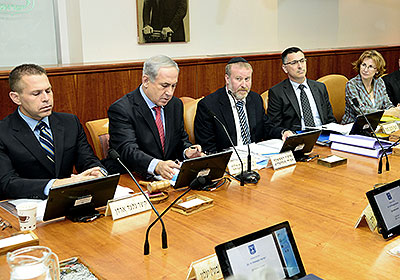 Prime Minister Benjamin Netanyahu, made the following remarks at the start of the Cabinet meeting:

“Israel is a nation of law. Whoever violates the law will be punished severely. We will not tolerate disturbances and riots. We will take determined action against those who throw stones, firebombs and fireworks, and block roads, and against demonstrations that call for our destruction. We are not prepared to tolerate more demonstrations in the heart of our cities in which Hamas or ISIS flags are waved and calls are made to redeem Palestine with blood and fire, calling in effect for the destruction of the State of Israel. I have instructed the Interior Minister to use all means, including evaluating the possibility of revoking the citizenship of those who call for the destruction of the State of Israel.

Standing behind this incitement are – first of all – the various Islamic movements: Hamas and the Islamic movement in Israel. In the forefront, at least vis-a-vis the agitation on the Temple Mount, are the Mourabitoun and the Mourabiat – movements engaged in incitement and which are financed by funds from extremist Islam. I have instructed that they be outlawed. But also standing behind this incitement is the Palestinian Authority and its leader, Abu Mazen. The website of their official body, Fatah, explains that the Jewish people were, in effect, never here, that the Temple was never here, that David, Solomon, Isaiah, Jeremiah and the kings and prophets of Israel – are all fiction. This is nothing less than a clear attempt to distort not only the modern truth, but also the historical truth. Against these distortions and these gross lies, we must tell the truth to our people and to the world. We must tell the truth to the supreme element that seeks our destruction and I mean Iran.

The President of Iran, or the leader of Iran, Khameini, has been in the news of late. Just yesterday he called for our destruction. Remarks to the effect that Iran has moderated are overshadowed by Iran’s actual policies, including the call for our destruction and the denial of human rights, which has surged in Iran in the past year, and the reports that we are receiving from the IAEA that Iran is continuing to lie and to lead the world astray regarding its plans and actions to achieve nuclear weapons.

Against such an Iran, which is controlled by such a regime, we must do everything so that it does not acquire nuclear weapons or the ability to produce nuclear weapons on short notice. And the international community now faces a clear choice, to give in to Iran’s demands in a capitulation agreement that endangers not only Israel but the entire world, or to insist on the demand that Iran dismantle its ability to manufacture nuclear weapons. Israel will not countenance an agreement that leaves Iran as a nuclear threshold state. This endangers us all.”