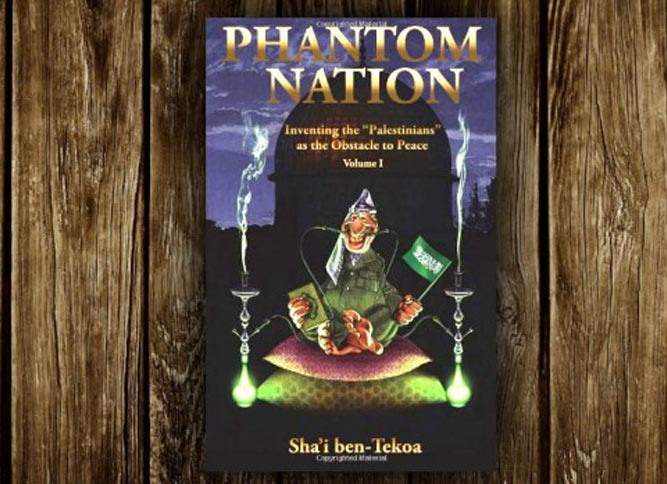 956 pages available only at www.Amazon.com

Not since Joan Peters’s From Time Immemorial thirty years ago has there been such a book on the Arab-Israeli conflict. It belongs in every Jewish home, synagogue and school. It explodes the No. 1 anti-Semitic lie of our generation: that the Jews/Zionists stole 78% of Palestine in 1948 and the remaining 22% in 1967 from the “Palestinians” and should give back at least that smaller piece so that the “Palestinians” can have a state too.

This is the called the Two-State Solution, but Sha’i ben-Tekoa’s original historical research tells another story. Using classical maps of the Holy Land, he shows how at this very moment there are four states already with a piece of Palestine. Three of them are officially Arab (Lebanon, Syria, Jordan); the other is officially Jewish, and the Arab share is more than half, 53% to be exact. That is: if Israel is, as accused, in occupation of Palestinian territory, the Lebanese, Syrians and Jordanians are in occupation of even more of it, and the Two-State Solution, which calls for the creation of a fourth Arab state with a piece of Palestine, should therefore be called The Five-State Solution.

So much for the first chapter of this riveting re-vision of the Arab war against Jewish independence perversely disguised in our time as Israel’s war against “Palestinian” independence. Ben-Tekoa claims the invention of this ahistorical people has been nothing but the reversal of historical truth.

Hired by Prime Minister Yitzhak Shamir’s Chief of Staff Yosef ben-Aharon to do a statistical analysis of United Nations voting patterns on the Arab-Israeli conflict, he also kept an eye out for the first appearance in UN documentation of “the Palestinians.” He found it, and the date was eye-opening: 1970, more than three years after the Six-Day War. Before then — for the first quarter-century of the existence of the United Nations Organization — not a word in its debates was said about any “Palestinians,” let alone their alleged victimization by the Jews, let alone the need to create a state for them. Not until the 1970s did “the Palestinian cause” take off.

The book opens with the famous London Sunday Times interview in 1969 during which Israel’s Prime Minister Golda Meir said there was no such people in history as “Palestinians,” which caused an uproar. Henceforth she (and all Israelis) were smeared with being racist deniers of “Palestinian” history and this primeval people’s rights to its ancient homeland. Ben-Tekoa’s voluminous research makes clear that Golda was perfectly right and her critics perfectly wrong.

Phantom Nation: Inventing the “Palestinians” as the Obstacle to Peace is an epic tale of the “birth” of this mythical nationality claiming to be thousands of years old that was supposedly just minding its own business after World War II when guilty Europeans (the UN) told the Jews to compensate themselves for the Holocaust by barging into Palestine and stealing it from the “Palestinians.”

Ben-Tekoa, by contrast, lays out how for the first forty years following the British Mandate in 1922 to create a Jewish homeland in a Palestine that had never existed for over a millennium of Muslim rule, the Grand Mufti of Jerusalem Haj Amin al-Husseini preached that there was no such country as Palestine. Jerusalem was located, he said, in Syria, and from his perspective he was right. In the Qur’an, there is no mention of a place called Palestine and at no time in the twelve centuries of Muslim rule over Jerusalem did they ever administer a jurisdiction/country that they called Falastin. Only in the tumultuous 1960s did the Arabs stop calling the land Bilad al-Sham meaning “Damascus territory,” start calling it Falastin and begin claiming that they were the ancient “Palestinians” who had been in residence in it since the beginning of time.

Phantom Nation is an expose of this massive and monstrous anti-Jewish hoax. It also happens to be a gripping narrative of the war against the Jews conducted not only by the Arabs but the Soviet bloc of states during the Cold War and the Islamic bloc of states and the foreign ministries of Western governments. The fabrication of the verbal construct “the Palestinians,” Ben-Tekoa argues, is just this generation’s version of an ever-mutating animus against the Jewish people.

His scope is vast: the whole of Zionist history, i.e. from the middle of the 19th century to the present, and he covers all the major events of the age: the wars, the endless terror atrocities perpetrated by the Arabs against not only Israel but the whole world via their skyjacking of international airliners; their massacre of Jews at the Munich Olympic Games; the triumphant appearance of Yasir Arafat at the UN; the UN resolution declaring Zionism a form of racism; the wars Israel has had to fight; the anti-terror operations without number like the rescue at Entebbe. And all with a view to peeling back the enormous lie of the last forty-plus years told to justify this generation’s homicidal violence against Jews in the name of their alleged victims, the putatively Paleolithic “Palestinian” people.

As a writer, Ben-Tekoa takes no prisoners. He is a defense attorney for the State of Israel who does not come to court to be even-handed to both sides but defend his client slandered with this generation’s version of antisemitism. He analyzes the Orwellian, semantic infiltration of the word “Palestinian” into the lexicon of discourse on the endless war against Israel which has not known one day of peace with (all) its neighbors since it declared independence in 1948.

The narrative also does not lack for LOL (laugh out loud) moments as the author skewers Israel’s enemies for their arrogance, inanity, ignorance and stupidity.

It is a book lovers of Israel have been waiting for.