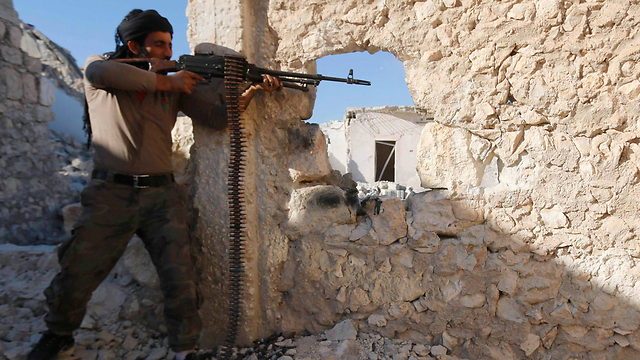 In Canada, there were two terror attacks within two days. The first was a run-over attack, and the second was an attack on the parliament in the capital city of Ottawa.

In New York, police officers were assaulted with an axe. In London, a cell of four members planned to murder Queen Elizabeth last week, armed with knives. A few months ago, France foiled a plot to blow up the Eifel Tower.

In Israel, we have had a little of everything. Both run-over attempts and murder in a stabbing attack. Welcome to the global intifada.

All the events of the past few weeks in the Western countries are nothing compared to what happened in the same period of time in the Muslim world. About 390 people have been murdered since the beginning of the month. They are all victims of jihad. This doesn’t include the Islamic State massacres, or the battle between al-Qaeda, the government and the Shiite Houthis tribe in Yemen.

In the past few months there have been, every month, between 10,000 to 15,000 jihad victims, and the absolute majority of them are Muslims. A bloody festival which is growing stronger. The free world, including Israel, is only receiving flashes. Less than a thousandth.

This is the current state of affairs. It’s neither the “occupation” nor the foolish insistence of extreme right-wing activists to change the status quo on the Temple Mount. Because we are talking about a global bonfire. A global intifada.

The Libyan city of Derna was also declared part of the Islamic State this week. There are neighborhoods in European cities which are dominated, on one level or another, by jihad supporters. They are threatening Ottawa, New York, London and Paris. The “occupation” is in every place where there is freedom and democracy and gender equality.

Those inflaming the situation, from ISIS and Hamas to the local instigator carrying the Al-Aqsa flag, Sheikh Raed Salah, are not looking for equality, liberation, democracy or freedom. They want darkness and oppression. They want an Islamic caliphate.

And when Mahmoud Abbas joins the incitement, he isn’t serving the Palestinians. He is worsening their situation. And when the residents of Kafr Kanna and others support the lunatic who attacked police officers with a knife, they are not contributing to the justified struggle for equality. They are increasing the alienation.

We are in the midst of a turbid global wave. The evil spirit is winning. This spirit has an army of supporters in the West. Not just radical Islamists, but also intellectuals, professors, “rights activists” and the rest of the members of the anti-Israel campaign.

The Middle East Studies Association of North America (MESA) is one of the worst. For years, many of this organization’s leaders and members have been providing explanations or justifications and showing an understanding for any jihadist opinion.

Saudi billionaire al-Waleed bin Talal is one of the most important donors to prestigious institutions of Middle Eastern studies in universities such as Harvard and George Washington. The results correspond with that.

The political Islam is tailing the West, and many parts of the Western academia are busy distorting and castrating common sense and free thought. So MESA’s decision to join the BDS campaign, which denies Israel’s right to exist, comes as no surprise.

Egyptian sheikh Yusuf Qaradawi, the most important scholar in the Muslim world who lives in Qatar, is a BDS supporter. He supports not only Israel’s destruction but also the annihilation of Jews. Prof. John Esposito, who served as MESA’s president, is a pronounced supporter of Qaradawi, and of course of the BDS. He is an authentic representative of the evil spirit.

At some point, the free world will wake up. At some point, it will turn out that this is a global intifada. Let’s just hope it won’t be too late.