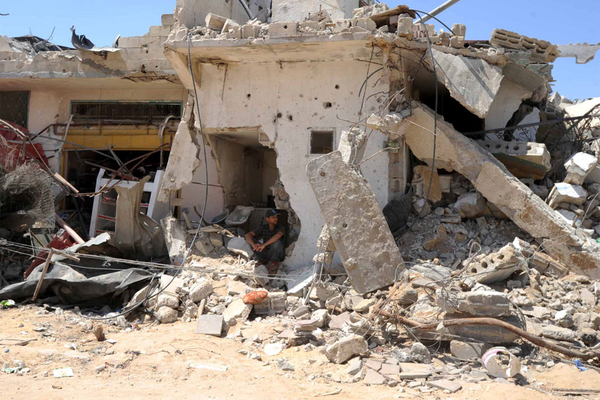 The only option Hamas faces, therefore, is to attack Israel again as a way of ridding itself of the severe crisis in the Gaza Strip and the growing frustration among the Palestinians living there. Hamas’s biggest fear is that this frustration will be translated into disillusionment with its regime. That is why Hamas is now seeking to direct the anger on the Palestinian street toward Israel.

Hamas is also hoping that another war will further increase anti-Israel sentiment around the world and earn the Palestinians even more sympathy.

Hamas’s threats should be taken seriously.

Hamas is once again threatening to attack Israel, this time over the failure of the international community and the Palestinian Authority to fulfill their promises to rebuild the Gaza Strip in the aftermath of Operation Protective Edge.

Hamas leaders are particularly angry with the Palestinian Authority [PA] and its president, Mahmoud Abbas, whom they accuse of hindering efforts to rebuild hundreds of destroyed homes in the Gaza Strip.

Hamas is also angry with the Egyptians for closing the Rafah border crossing after a terror attack in Sinai in which 32 Egyptian soldiers were killed.

Moreover, Hamas has rejected the United Nations plan to reconstruct the Gaza Strip on the pretext that it “sidelines” the Islamist movement and allows Israel to decide who would benefit from the work. “The UN plan is unacceptable and ineffective,” said Hamas spokesman Sami Abu Zuhri.

According to the UN plan, which was announced in September, the PA government will be responsible for repairing damaged homes and public sector projects, while the UN will focus on schools, clinics and “basic utilities.'”

The construction materials intended for the Gaza Strip, according to the plan, would have to be approved by Israeli authorities.

Hamas is opposed to the UN plan mainly because it denies the Islamist organization any role in the reconstruction of the Gaza Strip. Hamas is also worried that the involvement of the Palestinian Authority in the reconstruction effort would undermine Hamas’s control over the Gaza Strip, and allow Abbas and his Fatah faction to take credit for helping the Palestinians living there.

Last month, a donor conference in Cairo pledged $5.4 billion for the reconstruction of the Gaza Strip.

However, Hamas maintains that since then, the Palestinians in the Gaza Strip have not seen any of the promised funds. Hamas has also strongly denied claims by some PA officials that it had asked for 20% of the funds for itself.

The Palestinian Authority envoy to Egypt, Barakat al-Farra, accused Hamas of obstructing the reconstruction drive; he added that the movement was seeking to lay its hands on 20% of the funds earmarked for the Gaza Strip. Hamas, for its part, claims that the PA is seeking to lay its hands on more than half the funds promised by the Cairo donor conference.

Rising tensions between Hamas and Mahmoud Abbas’s Palestinian Authority are the real reason why the reconstruction of the Gaza Strip has still not started. These tensions reached their peak with the recent bombings that targeted the homes and vehicles of 15 senior Abbas loyalists in the Gaza Strip. Abbas has held Hamas responsible for the attacks — a charge that the Islamist movement has strongly denied.

Egypt’s decision to close the Rafah border crossing with the Gaza Strip is also responsible for the delay in implementing the reconstruction plan.

Although Hamas has openly accused the PA, UN and Egypt of obstructing the reconstruction scheme, it is now threatening to resume its terror attacks on Israel.

Hamas cannot launch terror attacks against the Palestinian Authority in the West Bank thanks to the presence of the Israel Defense Forces [IDF] there. Hamas will also refrain from doing so to avoid being accused by Palestinians of “destroying national unity.” Hamas does not want to be held responsible for Palestinian civil war.

Hamas is equally careful not to engage in a confrontation with Egypt, which has been waging a massive military campaign against terror groups in Sinai.

Relations between Hamas and Egypt appear to be at an all-time low; many Egyptians view the movement as a threat to their national security. Any Hamas attack on Egypt will undoubtedly draw a very strong response from the Egyptian army — one that would surely deal a deadly blow to Hamas and its supporters in the Gaza Strip.

And Hamas is not going to initiate a crisis with the UN out of fear that such a move would rally the world against the movement and end the international organizations’ services and relief work in the Gaza Strip.

The only option Hamas faces, therefore, is to attack Israel again as a way of ridding itself of the severe crisis in the Gaza Strip and the growing frustration among Palestinians living there.

Hamas’s biggest fear is that this frustration will be translated into disillusionment with its regime. That is why Hamas is now seeking to direct the anger on the Palestinian street toward Israel.

Recent statements by several Hamas representatives show that the Islamist movement does not rule out the possibility of waging another war against Israel, using as an excuse the failed promises to reconstruct the Gaza Strip.

Hamas is now talking about an imminent “explosion” against Israel if the promises to rebuild Gaza are not fulfilled. Some Hamas representatives even have the audacity to hold Israel fully responsible for hindering the reconstruction of the Gaza Strip.

Hamas’s threats against Israel should be taken seriously, especially in light of reports that the movement is continuing to prepare for another war. Hamas not only continues to dig tunnels under the border with Israel; it has also been test-firing rockets into the Mediterranean Sea.

Hamas does not have much left to lose in another military confrontation with Israel.

Abbas also stands to benefit from another war in the Gaza Strip. Renewed fighting would absolve him of his responsibility toward the reconstruction of the Gaza Strip. Additionally, of course, there is always the possibility that Israel would “do the job for him” and get rid of Hamas. And like Hamas, Abbas too would seek to take advantage of the fighting to wage another campaign of incitement against Israel in the international arena.