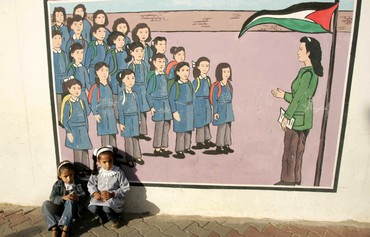 The theme of UNRWA is “Peace Starts Here”. Accountability for UNRWA policies, which do not promote peace, rests with donors to UNRWA.

The UN does not fund UNRWA activities. Donor nations do.

Our published piece in today’s Jerusalem Post speaks for itself.

There are numerous indiscretions in UNRWA education policy which members of Parliament could question.

We suggest that MP Burrowes begin by asking six questions concerning Western-funded UNRWA education policies which affect the minds and hearts of 492,000 students who now study in UNRWA schools: The land of the Levant [Bilad al-Sham in Arabic] presently comprises the following states:

Note: Later editions feature “Palestine, Jordan, Lebanon, Syria” only, with no titles. The State of Israel is missing in both versions. Lesson 4: Palestine is Arab and Muslim

The Palestinian people is part of the Arab-Muslim nation

How can a UN body object to the existence of a nation that is a member in good standing of the United Nations Organization? A language exercise indicating the liberation of Palestine by a violent struggle:

I will reconcile the following poetic lines with the feelings they express: Hearing [weapons’] clash is pleasant to my ear

And the flow of blood gladdens my soul

As well as a body thrown upon the ground

Skirmished over by the desert predators

By your life! This is the death of men

And whoever asks for a noble death – here it is! Returning to the homes, to the valleys, to the mountains

With blood, sacrifice, fraternity and loyalty

To Jihad in the hills, [to] harvest in the land

These examples represent only some of the issues ignored in the studies of UNRWA/PA education that were presented to DFID and the British government  by organizations that whitewashed the current “spirit” of the schools in the UN refugee camps.