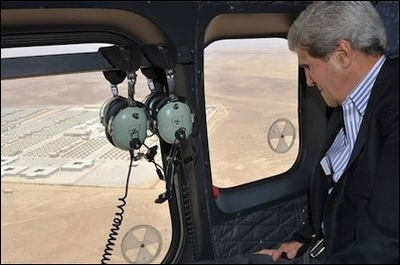 This exercise in repetition occurred in the wake of a war that again exposed UNRWA’s unsavory and illegal activities, from being “shocked” that its schools were used to store Hamas’ rockets and rote condemnations of Israel, to its employees cheering the murder of Israelis. The framework nevertheless represents the American commitment to prolong the existence of UNRWA, established almost exactly 65 years ago.One definition of insanity is doing the same thing over and over and expecting different results. By any measurement, Western policy towards United Nations Relief and Works Agency for Palestine Refugees in the Near East (UNRWA), the internationally funded agency for Palestinian “refugees,” meets that definition. One example is the newly released 2015 State DepartmentFramework for Cooperation Between UNRWA and the U.S.

The bulk of the document deals with UNRWA management. For example, there are the “15 objectives of the Medium Term Strategy” and the “Development of Strategic Response Plans for each of UNRWA’s five fields of operation through a consultative process.” The document also speaks of the “Continued implementation of ongoing management reforms, particularly in the areas of results-based management, resource mobilization, human resources, transition to and management of a new enterprise resource planning (ERP) data management system, and internal communications.”

They also take for granted that UNRWA will not only continue to exist through at least 2021 (the end of the next five year planning cycle,) but will also grow in both scope and size, then and beyond. There is no talk about limiting UNRWA’s operations, or turning responsibilities over to the Palestinian Authority or to countries that host Palestinian “refugees.” In fact, the only talk about an end to UNRWA is the boilerplate statement that “The goal of U.S. support to UNRWA is to ensure that Palestinian refugees live in dignity with an enhanced human development potential until a comprehensive and just solution is secured.” Left unsaid is the fact that only the United Nations General Assembly can dissolve UNRWA, and that body’s definition of a “comprehensive and just solution” to the Arab-Israeli conflict is unlikely to be realized anytime soon, if ever.These reflect the professionalization of UNRWA from a temporary relief organization into a multifaceted international organization dealing with Palestinian “basic education, health, relief and social services, microcredit, camp improvement and infrastructure and other assistance,” and “human development of Palestinian refugees by improving living conditions, economic potential, livelihoods, access, and human rights.” In other words, all the things that a Palestinian state should be doing for its citizens at home and outside its borders.

The Framework does make a sideways nod to the reality that the 2014 Gaza War generated some bad publicity for UNRWA, during the course of which American legislators demanded investigations into how Hamas weapons found their way into UNRWA schools. For the State Department the matter is pressing particularly given that Section 301(c) of the Foreign Assistance Act of 1961 (amended) states that “No contributions by the United States shall be made to (UNRWA) except on the condition that (UNRWA) take all possible measures to assure than no part of the United States contribution shall be used to furnish assistance to any refugee who is receiving military training as a member of the so-called Palestine Liberation Army or any other guerilla-type organization or who has engaged in any act of terrorism.”

The United States and UNRWA share concerns about the threat of terrorism, including within the context of the United Nation’s firm commitment to counter terrorism and the conditions on U.S. contributions to UNRWA under section 301(c). To this end, UNRWA is committed to taking all possible measures to ensure that funding provided by the United States to support UNRWA is not used to provide assistance to, or otherwise support, terrorists or terrorist organizations.

The United States and UNRWA intend to continue to work together throughout 2015 to enhance collaboration and communication on issues related to conformance with conditions on U.S. contributions to UNRWA as detailed in section 301(c). The United States supports UNRWA’s policy to take all possible measures to ensure that staff members understand and fulfill their obligations, under Agency Rules and Regulations, to refrain from prohibited outside activities.

This constitutes an UNRWA commitment to update its human resources manuals, nothing more. There is no mention of UNRWA’s refusal to use U.S. or Israeli terror watch lists to ensure any commitment to combat terrorism.

The unreality is compounded by the still more ludicrous statement that the U.S. “notes with appreciation efforts taken by UNRWA during the course of 2014 to strengthen the Agency’s neutrality compliance, including but not limited to the development of social media guidelines for official UNRWA communications…”

Whether the UNRWA spokesmancrying on camera while being interviewed constitutes “neutrality compliance” is unclear, as is the celebration of the recent Jerusalem murders of rabbis on the Facebook pages of UNRWA teachers. Perhaps it is unreasonable to expect UNRWA employees, the vast majority of whom are Palestinian, to express neutrality. But if that is the case, then the Framework’s endorsement of “UNRWA’s human rights, conflict resolution, and tolerance education program” may also be questioned, or at least its implementation.

But a deeper look at the document and the background of the American commitment to UNRWA suggests another vast disconnect. The framework states “All U.S. foreign assistance programs are required to demonstrate performance and accountability, and clearly link programming and funding directly to U.S. policy goals.” How prolonging the Palestinian “refugee” issue through the permanent institutionalizing of UNRWA serves U.S. policy goals is mystifying.

Beyond that, UNRWA officials at the top continue to defend the Palestinian “right of return,” in speeches as well as on official web pages, not to mention its pervasive promotion in UNRWA schools. How does promoting the Palestinian ideology that they are entitled to return to places once occupied by parents, grandparents and great-grandparents which are now in Israel, and in the process transform Israel into a Jewish minority state, serve U.S. policy, much less the cause of peace?

The new U.S.-UNRWA Framework is foreign policy by inertia. In 2013 that inertia cost$294,023,401, the amount of the U.S. contribution to UNRWA (in addition to $356,700,000 in aid to the Palestinian Authority). U.S. support to UNRWA kept Palestinians in stasis, promoted Palestinian rejectionism, and did not advance the cause of peace, or U.S. policy.