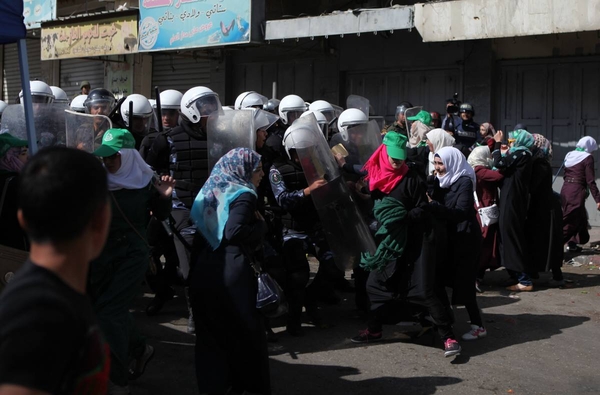 What the Palestinians did not tell the Security Council is that the state they seek to establish is one that does not respect public freedoms, first and foremost freedom of expression. It will be a state where the president or any of his senior officials could order the arrest of anyone who dares to speak out against lack of democracy or reforms.

Nor does the Palestinian Authority want the international community to know that 2014 witnessed the worst assaults on freedoms since its establishment two decades ago.

The Palestinian Authority is trying to send a message that no one is immune to arrest or harassment, even if it is a woman.

Palestinian women have become the latest victims of the Palestinian Authority’s assault on freedom of expression in the West Bank.

In the male-dominated Arab culture, an insult from a woman is considered far more offensive than one that comes from a man.

That is the main reason why the Palestinian Authority [PA] has been quick to take action against women who dare to speak out or make critical remarks.

The Palestinians also know that women are more vulnerable than men. By targeting women, the PA is not only trying to intimidate and silence them, but also deter others from speaking out. The PA is hoping to send a message that no one is immune to arrest or harassment, even if it is a woman.

The clampdown coincides with the Palestinian Authority’s effort to seek a United Nations Security Council resolution that sets a timeline for an Israeli withdrawal to the pre-1967 lines and the establishment of an independent Palestinian state.

Last week, Jordan submitted to the Security Council a Palestinian-drafted resolution calling for an end to the Israeli occupation of Palestinian territories by the end of 2017 and a peace deal within a year.

But what the Palestinians did not tell the Security Council is that the state they seek to establish is one that does not respect public freedoms, first and foremost freedom of expression.

This would be a state where people are detained and intimidated for using social media to express their views. It will also be a state where the president or any of his senior officials could order the arrest of anyone who dares to speak out against lack of democracy and reforms.

The draft resolution that was submitted to the Security Council fails to mention the fact that the Palestinian Authority is harassing and persecuting political opponents and critics, including Facebook users.

Moreover, the PA does not want the Security Council and the rest of the international community to know that, in the future Palestinian state, female journalists, writers and political activists can be detained for interrogation and threatened because of their work.

Over the past few weeks, security forces belonging to the Palestinian Authority summoned three Palestinian women for interrogation.

One of the women, Majdoleen Hassouneh, was summoned for interrogation on charges that she had “extended her tongue” against President Mahmoud Abbas. The charge refers to comments she had posted on Facebook in which she criticized Abbas.

“I was questioned for two hours about old postings on Facebook,” Hassouneh, who lives in Nablus, said. “They accused me of ‘extending my tongue’ and slandering the president. Criticizing the president is not slander and we are entitled to criticize any politician.”

Hassouneh said that although she was released, she still expected to be detained and brought before a court. She has denied the charges against her, saying that some of the comments presented by her interrogators were not hers or had been distorted.

The following day, the Palestinian Authority security forces summoned Eman Silawy, a female political activist and researcher from Jenin, because of her postings on Facebook.

Another woman, Lama Khater from Hebron, complained that PA security officers recently raided her home and confiscated computers and other electronic devices. Khater, a writer and political activist, said that this not the first raid of its kind on her home by the Palestinian Authority.

According to Esam Arouri, member of the Coordinating Committee of Non-Governmental Organizations, the assaults on public freedoms in the West Bank are a “dangerous sign of the deterioration of human rights in Palestine.” He said that the year 2014 was the worst regarding human rights violations since the inception of the Palestinian Authority.

Arouri said that torture and arbitrary arrests continued in PA-controlled territories during 2014.

Members of the Security Council who are being urged to support the Palestinian statehood bid should ask President Abbas about the nature of the state he intends to create for his people. These members are entitled to know whether the Palestinian state would be similar to other Arab dictatorships, where human rights violations have become part of the norm.

More importantly, the Security Council members have every right to know why Palestinian women are being harassed and intimidated by the Western-funded Palestinian security forces in the West Bank. These members are entitled to know if they are being asked to approve another Arab dictatorship before they raise their hands in favor of the statehood resolution.