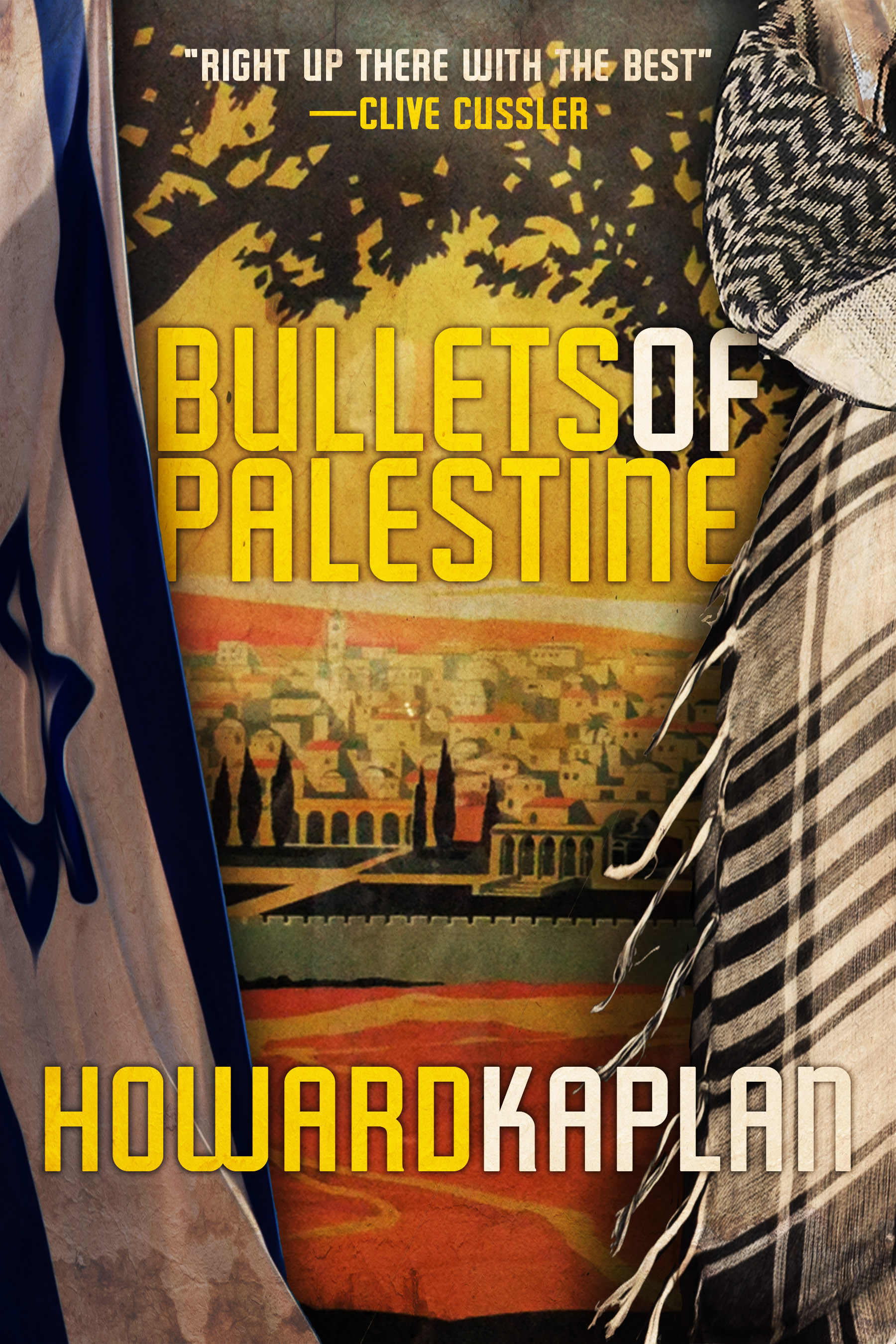 “Howard Kaplan is probably without peer in his grasp of the delicate and explosive relationship between the Israelis and the Palestinians. Bullets of Palestine is a terrorist thriller by an author who knows the Middle East like the back of his hand.” Los Angeles Times

Maybe unique in writing of any kind, but particularly in the Middle East spy thriller, Bullets of Palestine has been lavishly praised by both the Jewish/Israeli newspapers as well as the Arab press. In its original publication, in 1987, it garnered rave reviews from The Jerusalem Post, the Los Angeles Jewish Journal, Sada-Alwatan, the leading Arabic newspaper of North America and Al Fajr, then published in East Jerusalem.

The Middle East spy thriller has emerged as a popular subgenre. Audiences often found what they wanted in duels to the death between high–minded, no nonsense Israelis and mad-dog Arab assassins. It may be a hopeful sign of the times that Howard Kaplan’s thriller turns these conventions inside out finds ambiguities lurking behind every black and white certainty. For obvious reasons, this novel about reconciliation between the two sides is even more timely today than when it originally appeared.

Ramzy Awwad is a P.LO. master spy who has committed terrorist acts; he is also a sensitive novelist in sympathy with the moderates among his people. Shai Shaham is an Israeli master spy frustrated by the elements of his country who have given up on any compromise solution. The former head of Israeli Intelligence, put out to pasture by younger elements, from retirement on kibbutz uses his resources inside his former agency to have Shai kidnap Ramzy, bring him back to Israel and have Shai convince him that they should work together against their common enemy, the real life Palestinian extremist, Abu Nidal. Shai finds Ramzy in a Palestinian hospital in Sidon and in Kaplan’s relentless adherence to facts rather than political persuasion, the Palestinians there, as the Israeli invasion of Lebanon has begun, are draining blood and essentially killing Maronite Christians as they are drained dry, the blood to be used for transfusions for wounded Palestinian fighters. When Shai captures Ramzy in that hospital basement, Ramzy is in the midst of removing the needles from the Christians’ arms. With Palestinian fighters everywhere in the hospital, Shai risks his own life to allow Ramzy to finish. This is how they meet.

During the 1980’s Lebanon War, Kaplan was taken on an Israeli press tour that left from northern Israel, stopped at the former fedayeen stronghold, Beaufort Castle, and continued to Sidon. On the return to cross the Israeli border near Rosh Hanikrah, Kaplan toured the then large Israeli prison camp for Palestinian prisoners, Ansar, just inside Lebanon. The prison included a small, unfenced area for Israeli military prisoners guilty of looting and the like. Life inside the prison as well as in the Palestinian refugee camps of Sabra and Shatilla where, while Israeli troops stood guard outside and essentially turned a blind eye as Christian Phalangists entered the camps, expecting to find Palestinian fighters. The Phalangists were after vengeance for the assassination of their leader, Bachir Gemayel, the militia commander and President-elect of Lebanon. The Palestinian fighters had already fled and the Phalangists took their vengeance for the assassination out on the Palestinian women and children remaining there.

Ramzy and Shai become convinced that the best way to kill their common enemy, Abu Nidal, is to work together. Abu Nidal had been killing Jews and moderate Palestinians throughout Europe, and in spectacular real life raids actually attacked the Rome and Vienna airports. Italy and Austria were favorite targets of Abu Nidal as those countries were the friendliest to Yasser Arafat and the PLO. Shai and Ramzy’s relationship matures from barely suppressed suspicion to cool mutual admiration to wary friendship based on something approaching trust.

Bullets of Palestine is the second volume in the reissued Jerusalem spy series, with its predecessor, The Damascus Cover scheduled to be filmed in early 2015 starring Jonathan Rhys Myers, John Hurt and Jurgen Prochnow and the Israeli actor, Igal Naor, who recently was featured in the BBC/Sundance Channel mini-seriesThe Honorourable Woman. Both of Kaplan’s novels have been reissued recently as eBooks and in trade paperback editions.

Jerusalem Post “Incredible thrills. An ingenious plot. This book is a gripper.”

Los Angeles Jewish Journal “Seems to have leaped from today’s headlines. Kaplan’s book has achieved what may be the ultimate in evidence of true balance.”

Sada Alwatan “Heart rending. Kaplan tells the story in rapid-fire sequences dripping with realism; indeed so heavily infused with actual fact that it’s difficult to remember this is a work of fiction.”

Al Fajr (Jerusalem Palestinian Weekly) “In a conflict where both sides have tended to dehumanize the other, Kaplan has created two extremely human characters—one Palestinian, the other Israeli. In observing such a fictional relationship I found myself looking at the Israelis that I came across this week in a slightly different manner. I found I wanted to try and shed some of the stereotypes that living on one side of the conflict had given me. Maybe this is the purpose of fiction in the first place—to break down barriers.”