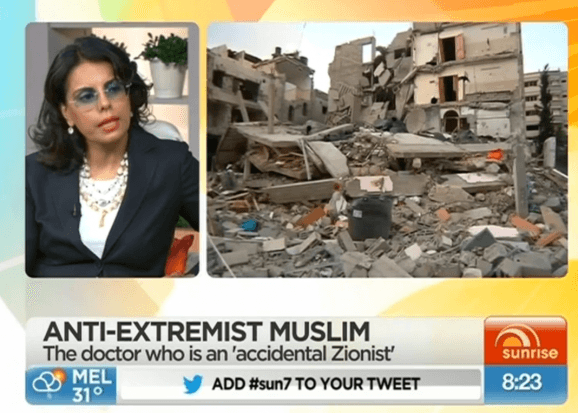 On a recent trip to Australia I was booked by Ch7′s Weekend Sunrise to discuss Project Rozana, an Israeli-Palestinian initiative to train West Bank physicians (predominantly Palestinian Muslims)in Israel’s Hadassah hospital. As an ambassador for the Project, I was lock step with my ideals both as a physician and as an observing Muslim opposed to virulently anti-Semitic Islamism.

A veteran media commentator, my suspicions should have been raised when the producers didn’t indicate the nature of my interview, nor even confirm that I would be discussing Project Rozana. Minutes before live broadcast, the young segment producer Maddy still ‘didn’t know’ what the anchors would be asking.

The cameras began rolling and I described my experiences at The Technion, The RamBam Medical Center and at Hadassah Hospital, responding to the anchors’ evident curiosity. The close knit and fully integrated coexistence with which Israeli and Arab Palestinian scientists and physicians interact with their equally diverse Israeli and Arab Palestinian patients surprised my interviewers.

Later we discussed Islamism, a movement which as a Muslim I recognise masquerades as the great monotheism of Islam but is starkly totalitarian in ideology with a foundational tenet of subjugating democracy. More significantly, Islamism harbors cosmic enmity to all Jewish and by extension Israeli entities and institutions. It is because I am an observing Muslim that I can emphatically reject Islamism – neither anti-Semitism nor anti-Zionism have basis in Islam.

Ending the segment, the anchors were broadly smiling and engaged. This had been the last of 27 scheduled commitments for my eight-day visit. Satisfied I had been informative and shared a novel perspective, I moved to exit the studio.

An elegant woman stopped me in my tracks. Meeting her blue-gray eyes, I was surprised to find tears filling to the brim. Touching her heart, she said: ‘I am the senior producer of this segment. My name is Iman. I am very close to the Palestinian people of Gaza, but after hearing you speak, you have opened me to new ideas.’ She confirmed she was of Egyptian heritage and like me, also Muslim. Intrigued, I suggested coffee.

Tears promptly dissipating, Iman grabbed her wallet. Over lattes we compared notes, talked about the Project and spoke about Gaza. Iman mentioned that she had formed an independent documentary production company. Immediately, I invited her to collaborate with Project Rozana – by chance the Project is keen to do a documentary on Israeli medicine to reveal the kind of coexistence to which I had referred. We left on a high note. I felt my work in Australia had ended in the best possible way.

Hours later, I received the link of the broadcast (you can watch it here). The shock was physical as I witnessed my exploitation. At each description of the pluralism and egalitarianism I had witnessed in Israeli medicine, the screen split to show the rubble of decimated North Gaza during the Israel-Hamas war, or the launching of an Iron Dome interception missile.Then the screen split to the Security Wall, shown from the Palestinian, not Israeli side.

The war footage had clearly been assembled in advance of my live interview without prior knowledge of what I would say. In an unseen control room, to the producers’ signal, as I responded with words like ‘coexistence’, ‘integration’ or ‘pluralism’, a technician pulled the trigger and rolled the stock ‘Israel as a terrorist state’ footage; detonating my truthful and universal message.

I had been reduced to an instrument of rank media opportunism. Worse, it was possible the tearful Iman had been the architect of my on-air vivisection. Self-described as the senior producer and ‘very close to the Palestinians of Gaza’, Iman had withheld remarking on this footage during our 30 minute coffee.

In my ignorance, I had unwittingly collaborated in my own exploitation by the Australian broadcaster who chose to cast me not as an anti-Islamist Muslim physician volunteering in pursuit of coexistence but as a vapid tool serving the malignant media construct of a two-dimensional anti-Semitic caricature of Zionism. This was a deliberate and opportunistic objectification of my identity as a Muslim and a physician, of the Jewish state reduced to an anti-Semitic and anti-Zionist mannequin, and of my political position as an opponent of Islamism; a position which entails significant personal and professional risk. This is neither journalism nor broadcasting; it’s pure pro-Hamas propaganda .

The producers hadn’t bothered to insert Hamas foot-soldiers which include recruited Palestinian children and youth who wage war on Israelis, nor reveal the damage wrought by its hundreds of rockets on Israeli civilians (of whom 23% are non Jewish – mostly Sunni Muslim), nor did Australians see the industrially rendered labyrinth of Hamas tunnels so central to the recent conflict. Weekend Sunrise prostituted my goodwill in the service of personal or official anti-Israeli and pro-Hamas propaganda.

This is what Israel faces, that which no other nation embattled with the lethal threat of Islamism wrestles: the battle over narrative. While Pakistan wages a far more indiscriminate campaign against Islamists in tribal areas, while Afghanistan has been under siege by the Taliban for a decade and a half, while Britain, Canada and America target, prosecute and eliminate Islamists, while Egypt wages war on Islamists and criminalizes their ideology, while Saudi Arabia incarcerates Islamists, while France defends Mali from Islamists, while Kenya and Nigeria flail against Islamists, only Israelis are to be dehumanized, judged apart from humanity as they face Islamist threats on every border. Only Israel must be denigrated, reviled and excoriated in her efforts to secure citizens and territories from the ambitions of genocidal anti-Semitic Islamism.

I felt intensely angry. To be whored out as I strive as an ambassador for a philanthropic mission with universal reach, to be debased as an instrument despite my decades long authority as a physician and Muslim humanist is nothing but obscene.

Qanta A Ahmed is a British journalist and author living in Manhattan. Follow her on twitter @MissDiagnosis