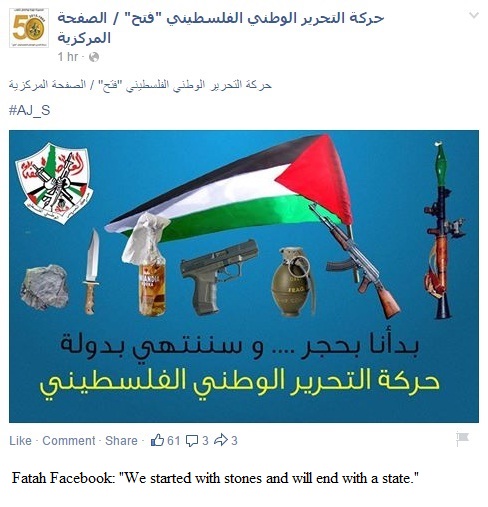 In order to understand the daily Palestinian incitement against Israel,
which encourages acts of terrorism, including murder, attached are four
photographs which have been recently uploaded to the Facebook page of
Palestinian Authority (PA) President Abu Mazen’s Fatah movement. The page
serves as a regular platform for the glorification of those who have
perpetrated large-scale terrorist attacks against Israel as part of the PA’s
systematic campaign of incitement, by various means and through various
bodies, against Israel.

Photograph #1 – The caption reads “We started with stones and will end with
a state.”
http://bit.ly/1usAA0u

Photograph #2 – One of the terrorists who participated in the March 1975
terrorist attack on the Savoy Hotel in Tel Aviv in which 11 Israelis were
murdered.
http://bit.ly/159B3bG

Photograph #3 – The burning bus from the March 1978 terrorist attack on the
coastal highway which was perpetrated by a Fatah cell. The terrorists seized
90 hostages, murdering 35 of them. One member of the cell, Dalal Mughrabi,
is considered by the PA to be a national hero to this day.
http://bit.ly/1Cgrl4k

Photograph #4 – Ra’ed Carmi, a Fatah archmurderer from the second intifada.
The photograph, which marks the day of his death, takes pride in the fact
that he was directly responsible for deaths of 165 Israelis and the wounding
of over 1,800 others.
http://bit.ly/1ANhajy