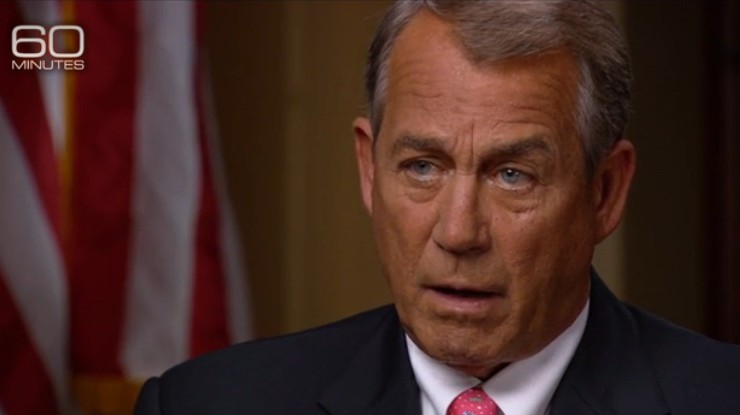 US Speaker of the House John Boehner said Sunday night that he informed President Barack Obama that he’d asked Prime Minister Benjamin Netanyahu to speak before Congress hours before the invite was made public.

Boehner and Netanyahu were said to have agreed that the Israeli prime minister would speak in Washington on March 3 without consulting the administration — the customary policy on such things. This gave rise to anger in Washington and to criticism in the media.

Asked about the White House’s statements that it had been blindsided by the plan, Boehner told CBS’s “60 Minutes,” “We gave them a heads up that morning.”

He defended the decision to invite Netanyahu to speak to Congress about his position on Iran’s nuclear program, a stance considerably more hawkish than that of the Obama administration.

Boehner went on to say he did not believe Obama was giving that threat the attention it deserved.

“The president didn’t spend but a few seconds (in his State of the Union address last week) talking about the threat, the terrorist threat that we as Americans face,” he said.

“This problem is growing all over the world…the president is trying to act as though it’s not there, but it is there and it’s going to be a threat to our homeland if we don’t address it in a bigger way.”

Netanyahu is expected to urge US lawmakers to ready new sanctions on Iran in order to force it to comply with international demands to curb its nuclear program, a move Obama strongly opposes and has vowed to veto.

Senate Majority Leader Mitch McConnell told “60 Minutes” he did not agree with Obama’s insistence that new sanctions at this sensitive time would cause negotiations with Tehran to break down.

“Under the proposal we’re considering those enhanced sanctions would only occur if a deal is not reached,” he said. “In other words it further incentivizes the Iranians to reach an agreement, because they know things could get considerably worse if they do not.”

On Sunday Israel’s Ambassador to the US Ron Dermer also defended Netanyahu’s planned speech, saying it was the prime minister’s “sacred duty” to present his stance on Iran.

Speaking at an Israel Bonds event in Florida, Dermer charged that the nuclear agreement being discussed between the P5+1 and Tehran “could endanger the very existence of the State of Israel,” by leaving Iran as a “nuclear threshold state.” The six world powers — Britain, China, France, Russia, the United States and Germany — are working with Iran to finalize an agreement that would curb Tehran’s nuclear program, which the West believes is intended to build atomic weapons, a charge the Islamic Republic denies. Two earlier deadlines passed without the final deal and a third deadline is looming on July 1.

Netanyahu’s upcoming speech sparked a public row between his government and Obama’s administration. The administration has been at odds with Netanyahu for years over international efforts to reach an agreement on Iran’s nuclear program, with Israel expressing skepticism over emerging terms that would allow Tehran to retain some uranium enrichment capacity.

Amid growing criticism in the US and in Israel of Netanyahu’s move, including by Israel’s former US envoy Michael Oren, who called on the prime minister to cancel the speech, Dermer said the visit was “not intended to show any disrespect for President Obama,” nor was it intended “to wade into your political debate.”

Earlier Sunday, White House Chief of Staff Denis McDonough appeared to downplay the tensions between the White House and Prime Minister Benjamin Netanyahu, insisting that the US relationship with Israel was “many-faceted, deep and abiding.”

McDonough deferred questions about comments attributed to an American official in Friday’s edition of the Haaretz daily, to the effect that Netanyahu “spat in our face publicly, and that’s no way to behave.”

The unnamed official warned that “Netanyahu ought to remember that President [Barack] Obama has a year and a half left to his presidency, and that there will be a price.”

Read more: Boehner: We gave White House heads up on Netanyahu | The Times of Israel http://www.timesofisrael.com/boehner-we-gave-white-house-heads-up-on-netanyahu/#ixzz3PyYb8rq0