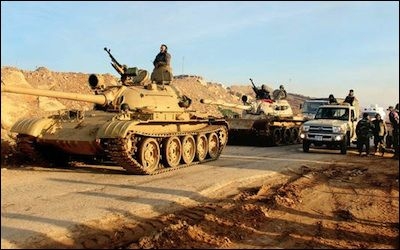 Middle East Forum Shillman/Ginsburg Fellow Aymenn Jawad al-Tamimi is one of world’s leading researchers on the Islamic State (IS) group terrorizing Iraq and Syria. The overwhelming majority of his writings and translations are too detailed or esoteric for distribution to a general audience, so instead MEF compiles periodic updates providing links and summaries for those who wish to follow the groundbreaking work of this prolific researcher.

The Twitter Wars Between Jamaat Ansar al-Islam Syria’s Factions (Jan. 10)
Jawad al-Tamimi tracks the social media war between two twitter accounts associated with the Syrian branch of Jamaat Ansar al-Islam (JAI), whose Iraqi parent branch was effectively absorbed into the Islamic State (IS) group in 2014. The former official twitter account of the Syrian JAI claims that the branch was dissolved and pledges allegiance to IS, while the rival account claims the JAI is still active. Photo evidence suggests the Syrian branch has not dissolved.

Jamaat Ansar al-Islam in Syria Joins The Islamic State? (Jan. 8)
Syria Comment
Examines the fate of JAI, concluding that it still has a presence on the ground in Aleppo province.

Special Report: Northern Storm and the Situation in Azaz (Syria) (Jan. 7)
Middle East Review of International Affairs (MERIA)
Drawing upon observations and interviews from his December 18-22 trip to Azaz, a town along the border with Turkey, the author examines Liwa Asifat al-Shamal (The Northern Storm Brigade), a member of the Islamic Front rebel coalition. Estimated to comprise around 500 fighters, Northern Storm lost control of Azaz to IS in the summer of 2013 only to regain control in February 2014.

The Islamic State Billboards and Murals of Tel Afar and Mosul (Jan. 7)
A photo essay on IS’s use of billboards and murals to advertise its propaganda in two important Sunni cities in northwestern Iraq.

Jihadi Debate over Jamaat Ansar al-Dawla al-Islamiya fi Bayt al-Maqdis (Jan. 2)
Examines a debate between two prominent jihadis over the true strength of Jamaat Ansar al-Dawla al-Islamiya fi Bayt al-Maqdis (The Group of Supporters/Partisans of the Islamic State in Bayt al-Maqdis), a group of militants in Gaza and Sinai that has declared allegiance to IS. Modifying his previous assessments of the group (see here and here), the author suggests that it is “a tiny underground group among a number of pro-IS entities in what is a very fragmented Salafi jihadi movement.”

Kata’ib al-Imam al-Gha’ib: Intro and Interview (Jan. 12)
An interview with Hussein al-Maliki, a commander in Kata’ib al-Imam al-Gha’ib (‘The Absent Imam Battalions’), one of the many Iraqi Shi’a militias that have emerged in the wake of the IS advance. Maliki says that the U.S. (along with Israel) is secretly supporting IS in a bid “to return to Iraq” and offers “no comment” on claims that his group receives support from Iran. A brief introduction includes displays of the group’s Hezbollah-style iconography.

Aymenn Jawad Al-Tamimi is a Shillman-Ginsburg Fellow at the Middle East Forum.