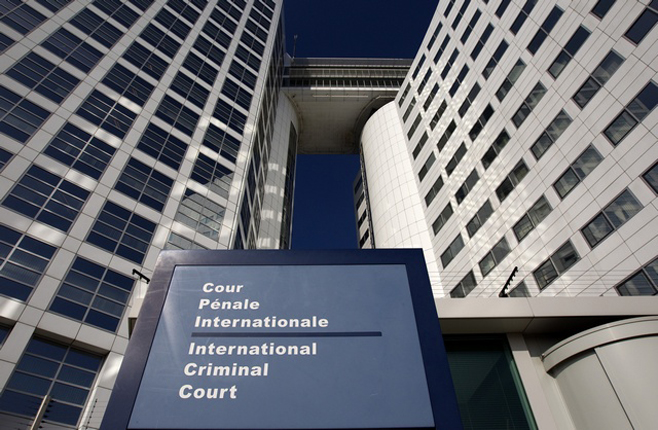 RECENT Palestinian moves to join the International Criminal Court are one more step in the decades-long campaign to vilify Israel and brand it in world opinion as “evil incarnate”.

It is a direct continuation of the “placard strategy” of anti-Israel activism, whereby Israel and Zionism are equated — whether in demonstration placards, speeches or writings — with a series of words: colonialism, apartheid, ethnic cleansing and genocide. These words are not chosen because they somehow reflect ­reality but because they are universally considered evil.

The effect of the continuous repeating of Zionism/Israel = Evil is to create an intellectual environment in which physically ridding the world of Israel would be considered desirable, even noble.

The purpose of the Palestinian moves in the ICC is to achieve official international sanction for branding Israel with the term “war criminal”, thereby adding an internationally sanctioned legitimacy to the placards used to vilify Israel and Zionism.

The purpose is not to seek justice by bringing certain Israeli officials to trial before the ICC but achieving an officially sanctioned international consensus that Israel, as a whole, is a war criminal country. As such, the resulting implication is that its entire existence is illegitimate.

This is a process that renowned human rights activist and former Canadian ­justice minister Irwin Cotler has named “laundering”: the campaign to delegitimise Israel and Zionism is “laundered” through the international human rights ­institutions. Given that this is the deep purpose of the Palestinian ­efforts to join the ICC and ­prosecute Israel through it, any effective response must address this deeper issue, rather than the issue on the surface: the ostensible legal battle.

The most common interpretation of the Israeli efforts to prevent the Palestinians acceding to the ICC is that Israel is afraid of being “found out”. Most people assume that if Israel had nothing to hide it would not be so concerned; ergo, it has something to hide from the ICC. The ICC tries war crimes, meaning therefore that Israel must indeed be a “war criminal country” if it is so concerned about it. The Palestinians are achieving the goals of their ICC campaign — to vilify Israel in international opinion — before they have even been accepted to the ICC.

Israel is concerned about Palestinian accession to the ICC because it knows that no matter what it has done, what it does and what it will do, it will be found guilty.

The UN system and the international judicial system are structurally incapable of fairly judging Israel because they are numbers-based systems: one country, no matter how vile, one vote.

Israel has one vote. The Arab League countries have 21, the Muslim countries have 56. They have voted, and will always vote, against Israel. With such a high share of the votes they get still more countries to support them.

The outcome of this simple maths is that in all the UN bodies where the US cannot exercise its veto power, Israel remains alone, unprotected, and is regularly ganged up on by the countries that have the preponderant numbers.

Half of all condemnations issued by the UN Human Rights Council have been against Israel, equal to the rest of the world combined. Moreover, the condemnations against Israel are always absolute, whereas condemnation against other countries is usually softened with caveats and commendations for their supposed efforts to do better.

The same is true of the UN General Assembly — half of its ­decisions historically have been directed against Israel. The ICC, which has failed to establish itself as an impartial and credible body, is likely to do no better if it were ­allowed to attempt to judge and punish Israel.

The tragic irony is that much of the UN and its treaty-based system of human rights was created to counter the darkness of the Holocaust, then grossly misinterpreted and abused against the world’s only Jewish state, ­Israel.

Einat Wilf is a senior fellow with the Jewish People Policy Institute and an adjunct fellow at the Washington Institute for Near East Policy.

Dietrich Bonhoeffer 1945 – Stupid people are more dangerous than evil ones

Center for Near East Policy Research
549 POSTS0 COMMENTS
© A WEBstationONE.com production, partially funded by the Internet Development Fund and the IDF Link technology. © 2003-2020 All rights reserved. Articles and Special Reports on IsraelBehindTheNews.com are copyrighted. Every reader is welcome to reprint any and all articles, and with citation.
MORE STORIES

The Protestant Cutting Edge Of Demonization Of Israel And The Jewish...

Center for Near East Policy Research - August 12, 2022
Presbyterians and Episcopalians recently held their church-wide conventions, the kind that are convened only every few years to decide major policy issues. Both voted...