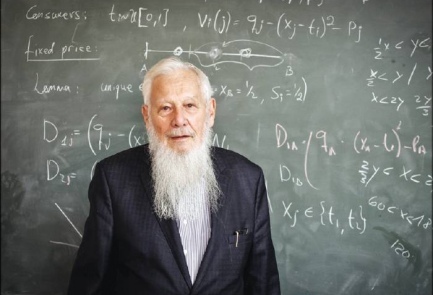 Nobel laureate Professor Robert (Yisrael) Aumann is convinced that both Iran and North Korea are making a mockery of the international community.

“The world aligns itself with those who are strong, even if they are the embodiment of evil. That is why [Prime Minister Benjamin] Netanyahu’s insistence on addressing Congress in an effort to prevent a deal between the United States and Iran is vital,” Aumann says.

Internationally renowned for his contributions to the field of game theory, Aumann believes the prime minister should hold his ground.

“Capitulation, sycophancy, and cowardice will only undermine us,” he says. “Sometimes, you have to courageously follow your own path and not try to curry favor with anyone.”

Israel’s actions during the 1967 Six-Day war and the 1976 Entebbe hostage crisis, as well as its decision to bomb the Osirak nuclear reactor in Iraq in 1981, “garnered worldwide sympathy. Eventually, this will be the case here, as well. The world will learn to appreciate Israel’s determination against the Iranian threat, and something good will come of this adamant stance.”

I spoke with Aumann at a conference hosted by the Federmann Center for the Study of Rationality in the Hebrew University of Jerusalem.

“Rationality addresses the question of whether what you are doing, the actions you take, further your objectives or not, meaning whether or not you using you head to reach your goal,” he said. Netanyahu’s decision to address Congress, he said, “is well within the realm of the rational.”

Even if the chance that Israel will be attacked by Iran is slim, “the result of such a strike would be so destructive that the risk cannot be measured by probability alone. Probability isn’t everything. It has to be multiplied by the variable of potential damage, should the threat be realized.”

Aumann dismissed suggestions the address might do more harm than good, and might even jeopardize Israel-U.S. relations.

“I don’t accept that,” he said. “This is a matter of life and death for Israel. Obama may be president, but you have Congress, and you have [American] public opinion, and I believe Netanyahu is exercising reasonable discretion in this case.

“The Iranians not only withstand U.S. [pressure], they scoff at it. They are able to endure economic pressure and sanctions, and they are able to make more headway than someone capitulating and showing weakness. In that respect we can learn a lesson from them on how to withstand pressure. So far, on this issue, Netanyahu has been able to withstand pressure. He has to speak before Congress.”

U.S. Secretary of State John Kerry said this week that the prime minister’s concerns over the impending deal with Iran were unfounded, and vowed Tehran “will not have nuclear weapons,” but Aumann doubted the assertion.

The Nobel laureate dismissed the opposition’s assertion that Netanyahu’s Congress address is an election campaign ploy.

“I heard the government has been paralyzed for 13 out of the past 32 months — 40 percent of the time — because of election time. That’s inconceivable,” he says.

“A government must be able to operate even in election time. If the police can investigate Yisrael Beytenu, and if the state comptroller can release reports on the Prime Minister’s Residence and the housing crisis, than Netanyahu can go to the U.S. to try to do everything he can to prevent a deal between the U.S. and Iran — even in election time.

“There is no such thing as ‘things you can and cannot do during election time,’ especially when some things are crucial to our security. It is inconceivable that you can run police investigations and publish reports [during election time], but running the country and dealing with something as critical as the nuclear talks — that you cannot do.”

Aumann was deeply pained by the 2005 disengagement from Gush Katif, although even today he applies rational standards to the issue.

“This expulsion, which was born out of weakness, concessions, and gestures [to the Palestinians], only bolstered Hamas in the Gaza Strip, and resulted in massive rocket fire at Israel,” he says. ‘This expulsion led to [the 2006] Lebanon War. This expulsion was supposed to bring about peace, but it only brought war and terror. Gestures rarely result in respect — only in contempt.”

While Aumann refused to hedge about Obama’s frame of mind, he made no secret of his opinions on the American president’s moves.

“I would rather focus on our interests, and Netanyahu is doing a good job promoting them,” he says.

Indeed, Aumann has been focusing on Israel’s management of the Iranian threat. Several years ago, during a lecture at Bar-Ilan University, he told the audience: “All these cries for peace we hear in Israel, especially from our side, do not bring peace any closer — they only push it away. If you chase peace it only eludes you. That’s not game theory; that’s history.”

He advised the audience to remember the Romans, and the fact that as “disagreeable” as they were, the Roman Empire ruled in peace for 400 years.

“Their motto was, ‘If you want peace, prepare for war,’ so they knew the game theory,” he says.

Despite the scathing criticism leveled at Netanyahu over the Congress address, Aumann described the move as “right,” adding that “if, as foreign reports suggest, we have nuclear deterrence, the chances of [an Iranian] attack are slim, but the situation is still dangerous enough for Netanyahu to do something unusual, even unpopular, to try to counter it.”