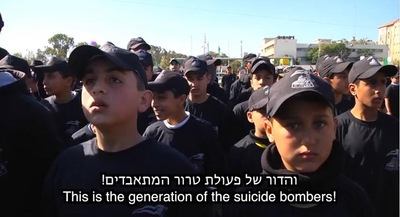 The boy stands on a crowded field that looks better suited for soccer matches. He might be in his early teens, his face smeared with black camouflage. He explains what he’s learning at a Hamas camp for boys in Gaza.

“I joined to fight the Zionist enemy,” he says, “and to liberate our forefathers’ land, Palestine. We won’t allow the Jews to keep our land.”

This boy is one member in the “Children’s Army of Hamas,” a title bestowed by the Israel-based Center for Near East Policy Research (CNEPR) in a new documentary short. It will be shown at a United Nations forum in Geneva today in an effort to prove that Hamas is violating international laws by training child soldiers, Fox News reports.

Hamas indoctrination of children at the earliest ages has been well documented. CNEPR sent a camera crew into Gaza three weeks ago to film the training and indoctrination, which features target practice with combat rifles, rockets, anti-aircraft equipment and exhortations from Hamas leaders. The video’s extensive training footage, along with the clear justifications offered by Hamas officials, leaves little room for interpretation.

The European Union has announced its intent to appeal a December court ruling which struck Hamas from a list of terrorist organizations. According to the CNEPR, some EU officials would like to keep Hamas off that terror list. The documentary also shows the close relationship between Hamas and the United Nations Relief and Works Agency for Palestine Refugees in the Near East (UNRWA) in Gaza.

Hamas has trained 17,000 teens from refugee camps run by UNRWA, the film says. That “represents a clear human rights violation” under a UN convention on children’s rights.

It invokes Quranic verses to justify killing Jews and destroying Israel. Its preamble says that, “Israel will exist and will continue to exist until Islam will obliterate it, just as it obliterated others before it.”

Hamas apologists have tried to argue that the document is no longer binding.

But in the film, Radwan, the Hamas religion minister, stresses the importance of indoctrinating the children with the charter’s central tenets calling for ongoing violent jihad targeting Israelis and Jews.

“The Hamas charter is part of the program we teach…the charter outlines our reason to fight. It represents our principles for liberation.”

“The charter is our principle and the principle has not changed. Hamas has decided that the armed struggle is the primary way to liberate the land,” Salama said.

Emphasizing the group’s commitment to Israel’s destruction, another Hamas parliament member, Yehia Moussa, confirmed that the terrorist organization continues to prepare for future confrontations with Israel after every war, seeking to eradicate the Jewish state.

“Every compromise is just a short ceasefire. After every war, we prepare for the next war until the end of the conquest,” Moussa explains.

Israel withdrew from the Gaza Strip in 2005. Hamas took over the territory following a coup that ousted Fatah in 2007. The terrorist organization does not differentiate between the Palestinian territories, such as the West Bank and Gaza, and pre-1967 Israel. In this context, all of Israel is “occupied land” that Hamas seeks to “liberate.”

The indoctrination campaign appears to be extremely effective, as the documentary features numerous passionate camp participants espousing their commitment to engage in violent conflict targeting Israelis and Jews.

“The armed struggle is the only way to liberate Palestine, not negotiations,” a teen boy at the training camp explained.

CNEPR is an institute focused on investigative research that provides insights into the Arab-Israeli conflict and the plight of Palestinians in UNRWA-administered refugee camps. The film is meant to clearly demonstrate Hamas’ continued persistence for violent struggle against the Jewish state in an effort to deter the EU from removing Hamas from its list of terrorist organizations.

The youth terrorist training camp featured in the documentary has become a common facet of Hamas rule in Gaza, training thousands of teenage boys to handle Kalashnikov rifles and explosives.

Hamas historically glorifies terrorists systematically and encourages future attacks by indoctrinating Palestinian youth to adopt violent jihad and engage in suicide bombings. In the past, Hamas has featured a back-to-school program called “The Gifted” featuring a child narrator declaring: “we’ll wear the battle-vest of self sacrifice and follow the path of the Shahids (martyrs).”

Click here to see the “Children’s Army of Hamas” documentary.