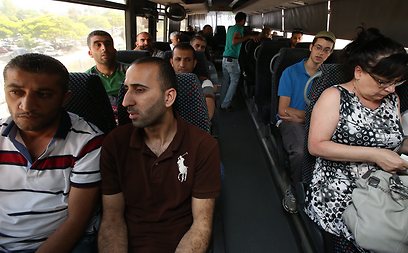 Op-ed: The reality in which Samaria residents prefer to hitchhike instead of getting on buses filled with Palestinian laborers is intolerable; Jews are also entitled to return home safely without feeling threatened.

I only passed by it on Wednesday evening. The excluding sign, white writing on a red background, forbade me to continue to Ramallah. Officially, the sign bans Israelis from entering. In practice, Israelis of Arab descent can move on freely. Only Jews are barred entry.

No one is crying about this racism, or about the fact that there is no chance I will ever be able to get on a Palestinian transportation company’s bus. But suddenly, when there is an attempt to separate between Israelis and Palestinians on the Israeli public transportation, cries of apartheid drown out the public discourse.

The truth is that I am not keen on the idea of bus segregation. It’s appropriate locally for the bus lines connecting the city of Ariel to central Israel, due to the large number of laborers who need transportation services on their way to work and back. The reality in which the residents of Ariel and Samaria prefer to hitchhike instead of getting on buses filled with laborers is intolerable. Jews are also entitled to come home from work without feeling threatened, and therefore they should have their own bus lines or be offered another solution which will guarantee their safe return. Palestinian and Israeli passengers on bus to Ariel, Wednesday. The bleeding conflict can only be solved by making peace on the ground, not through documents detached from reality (Photo: Shaul Golan)

But beyond the practical need, we must also deal with a fundamental question: Is the bus segregation really a racist decision? In order to examine this question, we should conduct a simple test: Will an Israeli Arab, carrying a blue identity card, be able to get on the bus designated for Israelis? Of course he will. In other words, we are not talking about racial segregation but about security segregation on the backdrop of a 100-year conflict. This bleeding conflict can only be solved by making peace on the ground itself, not through documents detached from reality.

It’s already happening. At another place I only passed by on Wednesday evening. Sha’ar Binyamin, an industrial zone and shopping center, is an island of coexistence, half a kilometer away from the Mukataa compound in Ramallah. Settlers and Palestinians work side by side there. The customers too, residents of Ramallah and Ofra, fill up their shopping carts at the Rami Levy supermarket and then sit together in the pizzeria. If there is ever peace in the Middle East, it will start from the economic cooperation developing on the ground, not from Geneva conventions.

Instead of refuting the false claims about racism, Prime Minister Benjamin Netanyahu immediately capitulated and canceled the pilot which would have allowed Samaria’s residents to return home safely. As others have said before, the most stable thing in Netanyahu’s government is the zigzag.