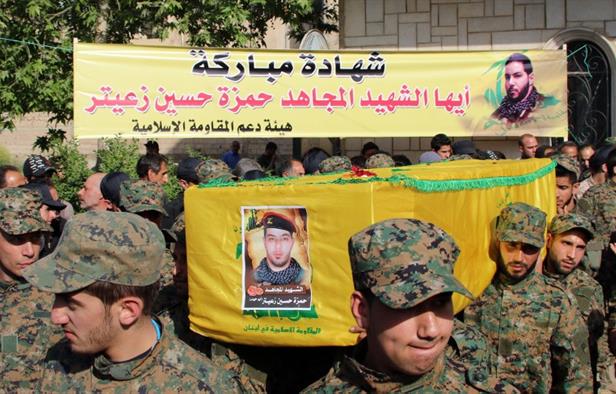 With a shortage of manpower, Hezbollah is trying to recruit young men from the Bekaa Valley to fight in Syria by tempting impressionable young men with cash.

Aïsha, a veiled woman in her early 60s, resident of a small town in the Bekaa, was stuffing zucchinis, sitting on a small chair at the doorstep, on a small terrace surrounding her house. She said with a low voice: “The finest young men in town are gone. They went to fight the enemies who are threatening our security. It is sad to say this but what more can I say? The call of duty has to be answered.” Aïsha was referring to young men who recently left their towns in the Bekaa Valley to join Hezbollah ranks in Syria.

Recently, Hezbollah has been losing ground in Syria, though there are no official numbers for its fatalities. According to an Al-Modon report, in pro-Hezbollah circles, “words are being whispered about great losses. Some people have gone even further and said that the size of losses in Syria exceeds the total losses incurred by the party since the beginning of its conflict with the enemy in 1982.” Consequently, Hezbollah has started to take unusual measures, recruiting heavily from various parts of Lebanon, including teenagers—endeavoring to uphold its Syrian front as long as possible.

Supporters and refuters of Hezbollah’s ideology

When it comes to ideology, Hezbollah is very adept at indoctrinating its youth and encouraging them to become jihadists. “I am not scared of armed groups as long as Al-Sayyed [Hassan Nasrallah] is protecting the borders of Lebanon,” said 45-year-old Ahmad, a father of five who lives in Baalbek. The yellow ribbon—the color of the Hezbollah flag—tied to the fence of his garden preemptively announces his political affiliation. “We are the men of the Sayyed. We are ready to give him our blood if he asked for it,” Ahmad told NOW. “My older son, who is 26, joined Hezbollah’s ranks eight months ago. My youngest, who is 20, joined the party six weeks ago. They both believe that Hezbollah will return victorious from Syria.”

Ahmad fully supports Hezbollah’s ideology and agendas even though it may cost the lives of his sons. “In addition, my daughter was engaged to a fighter who died as a martyr six months ago. I promised God I will not marry her or let her be engaged before Hezbollah returns victorious from Syria.”

Ahmad’s feelings about Hezbollah’s recruitment of young men from the Bekaa is not unique. In fact, a majority of Lebanese Shiites in the Bekaa share his opinions. Fighting in Syria is not as popular among Amal Movement supporters or other Shiites who consider themselves independent. “Only one of my kids joined the Shiite army,” said Fatima, who has three sons. “He went despite the fact that his father and I tried to stop him. He is my son; he is too precious. I never imagined I would lose him like this. I pray every minute for God to bring him back home safe. He was brainwashed by his friends and young men in town. He is only 21.”

In November 2014, An-Nahar reported that Hezbollah is also recruiting non-Shiite fighters from the Bekaa region, even Christians. But with tensions raised again in the country over renewed fighting in Qalamoun and Nasrallah’s latest speech, Christians in the Bekaa no longer seem to be taking Hezbollah’s bait. “Some Christian families sent their kids to fight ISIS before. Now, they are not doing it anymore,” said Abu Charbel (known affectionately as Al-Hakim; the wise). Abu Charbel is in his early 70s and lives in a small Christian village near Riyak. “The danger is bigger now, and this is not our war anymore. We thought at first we were defending our borders from terrorists, but it turned out that the political agenda is very different. We will not send our children to die in order to fight in somebody else’s war.”

Hezbollah realizes its ideology is not a substantial enough motivator to keep up its rank and file: paying fighters is essential. “A thousand dollars is a fortune for all of us, and it is definitely a dream come true for a 21-year-old young man who can’t find a job,” said Fatima. Fatima and her family live in a town near Bar Elias called Deir Zannoun. “Our town is somehow neglected by the government. We face a daily struggle to survive; sometimes we do not have electricity or water. The situation here is bad and our young men hardly find jobs. Paying money to recruit them to fight in Syria was one of the smartest things [the party] did. Nobody would say no to 1,000 or 1,200 dollars a month.”

Several Bekaa residents NOW spoke to from both Shiite and non-Shiite towns confirmed that a lot of young men who have joined Hezbollah’s military did so specifically for the money. The amounts quoted to NOW ranged between $500 and $2,000. “The youngest are the most vulnerable to money incentives,” said Abu Charbel. “When you give a 17 or 18-year-old boy a big amount of money, and you encourage him to go fight and convince him that he is fighting the ‘bad guys,’ he is more likely to walk towards death barefoot, and he will happily do it without measuring its consequences.”

In some towns, the streets were empty this week, even during the day. A few residents told NOW that armed men wander the streets day and night here and there, guarding the alleys. Even in crowded Chtaura, people seemed very cautious. “We don’t know what will happen next. We try to stay home at night, not to go out a lot,” said a shop owner in Chtaura square. “Lately, I feel that it’s more crowded here. There are definitely large numbers of Syrian refugees living here, but I also know that a lot of Lebanese families have been trying to move away from towns on the border because the situation there is not so good.”

In fact, a night tour in a few towns in the Bekaa really revealed to what extent locals are restricting their movements out of fear. The few cars one sees at these times are 4x4s, the majority of which do not have license plates. “These are the people securing the area,” said Ahmad. “The situation needs high measures of caution and attention. We can’t act like we did before because, from one side, the threats are bigger and, from the other side, there are fewer men in the towns because a lot of them joined Hezbollah’s ranks.”

“I will not send my children to die”

“No matter how much they pay, I will not send my children to die,” said Rahifa, a Druze woman who married a Shiite. She lives with her husband and her two sons on the outskirts of Anjar, a key border town mere minutes from Syria. It seemed that Rahifa’s family is not in a real need of money—they can afford to turn down Hezbollah offers. “Don’t get me wrong, we do support Hezbollah. For us, the party is the only resistance that exists against Israel in Lebanon. It is also defending the nearby borders from armed groups and terrorists who are regularly trying to invade our country. Unfortunately, the situation now is not the same as it was back in 2006. In 2006, we were certain that Hezbollah was able to defeat Israel. Now, with all the losses in Syria, we are not equally sure anymore.”

In Rahifa’s opinion, Hassan Nasrallah’s speech prior to the launching of the Qalamoun campaign was not as reassuring as before. “This time, Nasrallah did not promise us any victory. I trust that Nasrallah would never lie to his supporters. If he is not so sure he will win, I will not take the risk of sending my kids to Syria. After years of fighting in Syria, Hezbollah, just like any other army that could have been in its place, definitely lost a lot of men and a lot of resources and is much weaker than it was before. Therefore, I will not send my children to die,” said Rahifa.

“Unfortunately, not all people think like I do. We all know that when the party needs something, they will make sure to get it, by all means.”