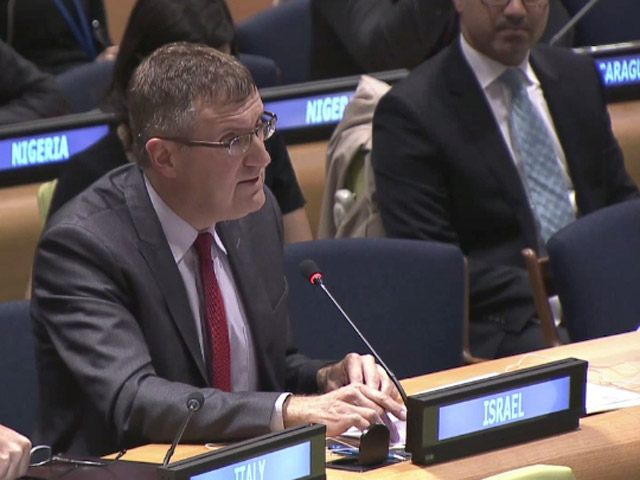 UNRWA has often remained silent while Hamas endangers the lives of Palestinians, including refugees, and commits war crimes by using civilian areas to target Israeli citizens. UNRWA spokespeople are quick to make accusations against Israel, but go out of their way to avoid mentioning Hamas.

I wish I could just describe all the ways Israel cooperates with UNRWA, and end it there. I wish I could sit here today and join in with the other speakers to simply thank UNRWA for all the humanitarian work it does, and leave it at that.

However, as the saying goes, “face reality as it is, not as you wish it to be”. In reality, UNRWA has a political agenda which casts a long shadow over its humanitarian agenda.

Make no mistake, since UNRWA was established 65 years ago, Israel has supported its important humanitarian mission, and continues to do so today. During this time, UNRWA and Israel have worked hand-in-hand to coordinate hundreds of projects that provide essential services for the Palestinian people. We also recognize UNRWA’s important contribution to the welfare of Palestinian refugees.

When UNRWA was established, their mandate included hundreds of thousands of refugees. Today, UNRWA asserts responsibility for over 5 million refugees. How did the number of refugees increase so dramatically when the purpose of a UN agency is to decrease it?

In 1950, the UN established the High Commissioner for Refugees to assist men, women, and children in dire situations around the world. That agency has helped tens of millions of people restart their lives and provide a brighter future for the next generation.

According to the UNHCR, you lose your refugee status if you become a citizen of another country. But in the Palestinian case, this restriction does not apply. UNRWA – and UNRWA alone – allows refugees to pass their refugee status to their children and now grandchildren.

It is no secret that the terrorist group Hamas, the de facto authority in the Gaza Strip, often obstructs humanitarian efforts. The fact that the Commissioner General did not mention today the responsibility Hamas bears for the situation in Gaza – does the Palestinians no favors.

UNRWA has often remained silent while Hamas endangers the lives of Palestinians, including refugees, and commits war crimes by using civilian areas to target Israeli citizens. UNRWA spokespeople are quick to make accusations against Israel, but go out of their way to avoid mentioning Hamas.

UNWRA had over 10,000 employees in Gaza – most of them Palestinian but also many internationals. Where were they when Hamas stockpiled thousands of rockets, many of them in close vicinity to UNWRA facilities. It seems that while they are quick to condemn Israel, when it comes to reporting on Hamas, UNWRA’s employees become blind, deaf, and mute.

While Hamas stockpiled rockets in UNRWA schools in order to launch them at Israel from nearby, the UNRWA press statement only managed to condemn, quote, “group or groups responsible”. Well, the group responsible has a name – Hamas. And it is an internationally recognized terrorist organization.

While Hamas is doing everything to obstruct reconstruction, Israel is doing everything it can to cooperate with UNRWA to help meet the humanitarian challenges in Gaza. Every day, hundreds of trucks carrying goods enter Gaza from Israel passing through Kerem Shalom crossing which is operating 24/7, at full capacity. In the past year, Israel has provided Gaza with millions of tons of equipment, materials and supplies to assist with reconstruction.

These are facts which we have not heard much of today.

UNRWA’s interference with the political process is beyond the scope of its legitimate activities, and endangers the fulfillment of its mandate. Throughout last summer we witnessed UNWRA officials act as judge, jury, and executioner. They reported facts as they saw fit, assigned guilt, and predetermined what the outcome of the process needs to be. Such interferences only deepens the conflicts and distances us from peace.

For instance, UNRWA’s recent massive media campaigns are fully in sync with the Palestinian political agenda, and serve no humanitarian purpose. Just listen to Hanan Ashrawi’sAnsari speech today and the usage of the word “justice”, which UNRWA is now doing. Take out UNWRA’s logo, it could well be an official Palestinian campaign.

UNRWA is also using its educational system to validate the Palestinian narrative, to fuel false promises, and to give credence to dangerous myths. From an early age, Palestinian children are taught that the only solution to their plight is the so-called “Claim of Return”. Many UNRWA facilities are decorated with keys, symbolizing this claim of return. Young children are taught that these keys will one day open doors for them – but in truth these keys have them locked in a distorted reality.

The “claim of return”, make no mistake, is a euphemism for the destruction of the State of Israel. This “claim” is the real obstacle to the two-state solution, to which Israel and so many of us in this room are fully committed. The only way to achieve peace is through direct negotiations.

The Middle East today is in a state of turmoil. Regimes are unstable, terrorist groups seize and hold territory, and the people suffer the consequences. Palestinian refugees in these countries are caught in the chaos.

In Syria, they face death and displacement from a bloody war. In Lebanon, refugee populations from Syria are denied a place to seek shelter from the ongoing violence. The existing Palestinian populations in Lebanon have for generations been segregated, and isolated from the rest of the Lebanese society.

In light of the real needs of the refugees, it is troubling that UNRWA would focus its resources on political campaigns, even as it cuts humanitarian assistance. Such campaigns only serve to support the Palestinian political agenda, and distance us from achieving peace.

Many of the Arab representatives expressed their so-called concern about situation of the Palestinian refugees. These Arab countries speak today about their suffering. However, when these governments had the opportunity to improve the lives of these refugees, they cynically exploited them for political purposes. Arab governments and the Arab League intentionally continue to sustain the problem of the Palestinian refugees by refusing to give them their basic rights.

Scan the list of UNRWA’s top donors, and you will discover that in 2014 nine out of ten of them are western countries. Apparently, when it comes to helping Palestinian refugees, Arab countries can’t find their wallets. Not only did the Arab states create and maintain the refugee problem, they expect others to pay for it.

An example of the hypocrisy by Arab states was evident today hearing the Saudi representative attack Israeli actions while Saudi forces are actively and indiscriminately attacking civilians, children’s schools and hospitals. Mr. Ambassador, you can’t buy your country out of this one so easily.

Even the good intentions are replaced by narrow political interests. In order to achieve the peaceful future we all hope for in the region, UNRWA must choose the right path. It must choose people over politics, neutrality over bias, and truth over propaganda. Only this path can solve the refugee problem rather than perpetuating it.