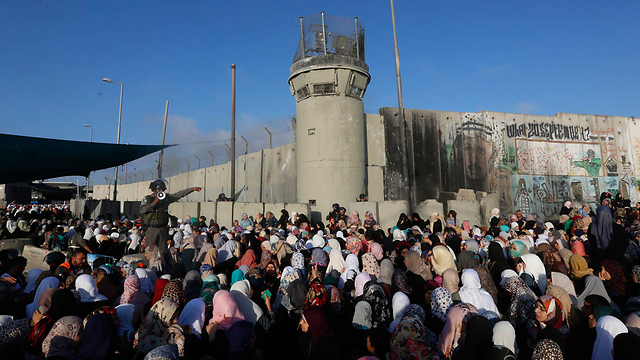 [Author neglects to mention that the “Qalandiya refugee camp”  is an UNRWA facility inside Jerusalem, where our staff produced  INSIDE THE UNRWA CLASSROOM. https://www.youtube.com/watch?v=YGJajyjMCbs- David Bedein]

Qalandiya refugee camp: A ‘chaotic base for terror’

The refugee camp on the outskirts of Jerusalem is a ‘no man’s land’ in which terror and crime thrive and neither Israeli nor Palestinian security forces have control.

The main reason for the current situation in the refugee camp is due to its location. Qalandiya is within Israel’s territorial jurisdiction but lies outside of the separation barrier, in the no-man’s land between Jerusalem and Ramallah. As a result, Israeli security forces rarely enter the camp, as every entry into the camp must be conducted as a small scale military operation. Palestinian security forces are legally barred from entering the camp but do occasionally attempt to show a certain presence within its boundaries.

As such, Qalandiya has become a comfortable base for both criminal enterprise and terrorist action against Israel. For example, the last Palestinian to be killed in a confrontation with security forces, Mohammed Al Ksbeh, lived in Qalandiya. Ksbeh had thrown a rock at the Binyamin Brigade commander’s jeep, smashing his windshield, and as a result was shot and killed. He was the third member of his family to be killed in confrontations with the IDF. Two of his brothers were killed in clashes with security forces during the second intifada. Inside the camp there are armed groups made up of mostly unemployed youths. The majority of these groups’ members identify with the Fatah movement but are in no way tied to the policies of the Palestinian Authority, largely due to a sense of disenfranchisement among them. The armed youths consider themselves part of the Al-Aqsa Martyrs Brigades, which was once the Fatah movement’s military wing. But the truth is Fatah’s military wing hasn’t really existed in an organized fashion in years. These youths along with their counterparts in the Jenin and Balata refugee camps, are just unorganized fragments of the same “Tanzim” organization that broke apart with the end of the second intifada. The groups occasionally conduct marches to showcase their presence in the refugee camps, parading around while masked and armed.

They are also not afraid of shooting in the air, as they are well aware of the non-existent police infrastructure. In the past year, and more specifically during Operation Protective Edge, there were reports of armed gunmen firing from within protests near the Qalandiya checkpoint. Palestinian security forces attributed the gunfire to residents of the Qalandiya refugee camp. In order not to stir confrontation, the forces typically arrive dressed as civilians, and arrest suspects in a swift and quiet manner. The forces occasionally pluck people off the streets by pulling them into vehicles, and quickly heading off towards Ramallah. The official stated that these raids are necessary but are not enough to solve the serious security problem within the camp. Palestinian security sources estimate that a large number of weapons are present in the camp and its surrounding communities.

The armed groups provide security forces with quite the headache. The problem with Qalandiya in comparison to the other refugee camps is the fact that neither Israel nor Palestinian security services maintain a constant security presence.