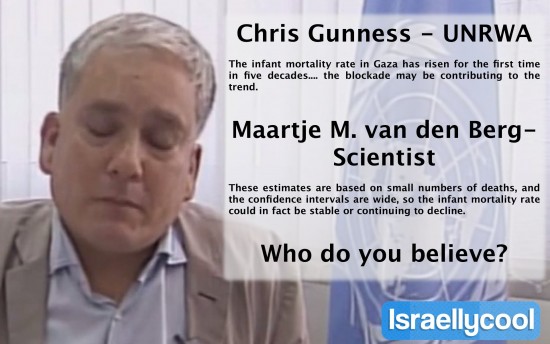 The following ominous tweet came out of Chris Gunness:

What a truly tragic reflection! Where else on earth is infant mortality rising? I bet not in blockaded places like #Gaza @BergMaartje @UNRWA

And he has a press release to go with it:

I have the full press release, here’s the start:

Jerusalem, 8 August 2015: The infant mortality rate in Gaza has risen for the first time in five decades, according to an UNRWA study, and UNRWA’s Health Director says the blockade may be contributing to the trend.

Every five years UNRWA conducts a survey of infant mortality across the region, and the 2013 results were released this week.

I also have the complete scientific paper upon which this breathless claim is made and into which Chris and his team manage to shoe horn a condemnation of Israel in the very first sentence (hint: blockade always means Israel, never Egypt or Hamas).

The whole of Gaza or just the refugees?

The paper repeats over and over they are only talking about “Palestinian Refugees” and people who availed themselves of UNRWA health clinics. This is not the whole population of Gaza. Typical language from the paper:

We used the same preceding-birth technique as in previous surveys. All multiparous mothers who came to the 22 UNRWA health centres to register their last-born child for immunization were asked if their preceding child was alive or dead.

The target population included multiparous mothers with at least two children born alive, who attended one of the 22 UNRWA health centres in Gaza for registration and immunization of their most recently-born child.

The Press Release from Chris Gunness and UNRWA doesn’t make this distinction at all.

This is a technical point to do with statistics and to be honest, it’s confirmed in the next section in clear English. As Judge Dan said (most of this post is based on his observations):

Their p-value for infant mortality is 0.61 and they publish it as a meaningful statistic. What a sham.

And another observation about this p-value from another of my more statistically qualified contacts:

If you have a p-value above 0.05 it basically means your experiment could just be a fluke. This is mentioned is given in such august reference sites as “Statistics for Dummies”:

Basically if they repeated this “experiment” 61% of the time they’d confirm what they were looking for just by pure chance. They might as well have flipped a coin and reported that. All of this comes from having way too few deaths of children to do this kind of statistics on. That should be something to celebrate right?

The entire survey is based on too small a sample

The scientific paper basically says these results are not enough to draw the conclusion that Chris Gunness and UNRWA are drawing. This is the start of the discussion part of the paper, emphasis is mine:

This survey was conducted in 2013 with November 2011 as a reference time. It showed for the first time in five decades that mortality rates had increased among Palestine refugee newborns in Gaza. This finding is worrying and suggests that Gaza is currently not on track to meet the 2015 MDG4 under-five mortality target of 14 per 1000 live births.[18] However, post-neonatal mortality rate declined significantly and the infant mortality rate was only slightly higher. These estimates are based on small numbers of deaths, and the confidence intervals are wide, so the infant mortality rate could in fact be stable or continuing to decline.

This entire breathless piece of propaganda (the press release not the paper) is based on asking a group of (often illiterate as the paper points out) women what happened to their last baby and, if it died, how it died. All the data is based on 65 deaths (this time) as opposed to 69 in 2008.

In fact it’s only in the infant mortality rate, and not other important categories, that there was any small rise.

Not published in a big name journal

Just as an additional piece of information, the study is not published in any of the world’s prestigious journals. It’s in something called “PLOS ONE” and according to its twitter bio  “is an international, peer-reviewed, open-access, online publication. Tweets by @mtdohm” which accepts papers for submission over the internet and then, apparently, peer reviews them. Look for the world’s media to totally ignore the source because it matches their predefined agendas.

The bigger picture is that since 1960 and all through the period of “brutal Israeli occupation” the infant mortality rates plummeted: far fewer babies die now than ever. Israel built some of the first and finest hospitals ever built to serve these populations: Jordan and Egypt barely did anything except leave their Arab brothers living in squalor. The Arab populations in Israel and the disputed territories including those handed back to full control by Palestinians like Gaza, have the lowest infant mortality rates of any general Arab populations in the entire region.

There are numerous other problems that go on in Gaza (and even within Israel’s Arab populations) but to blame the “blockade” in the first sentence and then wrap that ridiculous and unproven claim up in a scientific veneer is just typical of how UNRWA operates. For example, 19 of the 65 deaths talked about in the paper were “congenital anomalies”: this is often associated with poor genetic diversity: marrying first cousins is known to be a big problem in this society. It’s hard to see how a blockade is causing that.

And you can be sure this Press Release will be uncritically reported by Chris’s friends in the media. Look for stories from AP, AFP, Reuters and all the usual suspects. None of them will open and read or quote directly from the scientific paper. None of them will apply any critical thought to this story, 99% of their reporting will be a lazy regurgitation of Chris’s press release with a couple of drop in quotes.

Anti-Israel NGOs feeding worthless science to gullible, lethal journalists. A crackerjack combination for whipping up Jew hatred around the world!