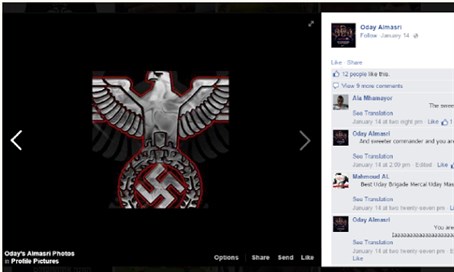 UN agency claims to be investigating anti-Semitic and pro-terror Facebook uploads from its school teachers.

Teachers working at United Nations Relief and Works Agency (UNRWA) schools in Gaza, Judea and Samaria, Lebanon and Jordan have received no disciplinary action for supporting anti-Semitism and terrorism on social media, the Elder of Zion blog has revealed in an ongoing investigative report.

According to the blog’s findings, the teachers often published Facebook posts against the Jewish state and in support of terrorist activity. Even a director of one of UNRWA’s schools was complicit, praising a terror attack carried out in 1978.

Other questionable uploads include a picture from Oday Al Masri, an UNRWA teacher in Jenin, featuring a swastika.

The organization responded by telling teachers to tone down the hate-fueled posts, concerned more with its reputation than the terrorism and anti-Semitism its employees were promoting.

In response, several teachers removed their affiliation with UNRWA on their Facebook accounts and/or changed their privacy settings. Several pages, as well as an UNRWA teacher’s group featuring jihadist videos, were also taken down.

However, no teachers have been dismissed or even reprimanded for their actions.

In light of Elder of Ziyon’s recent update to the scandal, a UNRWA spokesman told Channel 10 that if the reports prove credible, the organization would see the guilty parties were punished.

“If there are any charges, and if this is true, then it’s a very big issue and we’ll take care of it. If there is a suspected breach of neutrality on the part of employees, we will investigate and take significant steps, including dismissal,” the spokesman claimed.