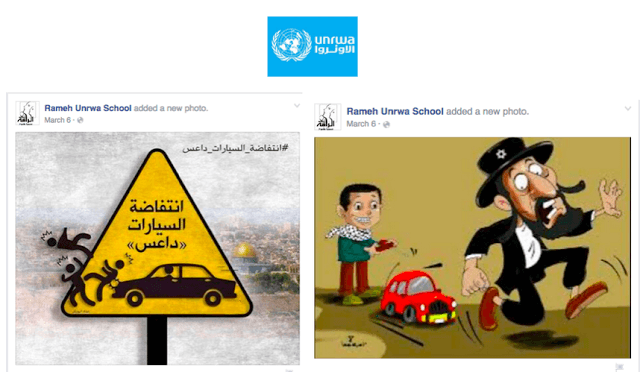 On Sunday, I reported that the Facebook page of an UNRWA school had posted antisemitic images and encouraged Arabs to run over Jews with cars.

On Monday, the news was reported in The Tower.

Breitbart News reported on the story as well, also referring to my earlier story of UNRWA teachers posting Nazi imagery that was covered by Channel 10 in Israel last week.

By Monday night, the entire Facebook page of the Rameh UNRWA school was gone.

But this isn’t a victory. This is a cover-up, one of many that I have exposed by UNRWA over the years.

At least twenty times I have exposed UNRWA hate, antisemitic and  pro-terror articles, poems and essays by UNRWA teachers and even on official UNRWA websites.  Almost invariably, the website would be silently taken down or the affiliation with UNRWA was removed from the social media posts.

Instead, UNRWA – and its spokesperson Chris Gunness in particular – hides their teachers’ activities and allows them to continue to act this way, just not as publicly.

An organization that really was dedicated to the principles that UNRWA espouses would proactively aim to clean house. Instead, UNRWA removes the evidence while the problem festers. There is not the slightest indication that any actual disciplining has occurred, ever. Gunness lied on Israeli TV when he said “If there is a suspected breach of neutrality on the part of employees, we will investigate and take significant steps, including dismissal.” (He gave an almost identical lie when confronted by a reporter for a similar issue I found in 2013.)

It has never happened. On the contrary – when a UNRWA teachers union sent a letter to the agency officially denying the Holocaust, it was never reported and there were no repercussions.

UNRWA only acts when reporters call them. They read my tweets and instead of jumping to investigate, they do everything they can to hide the evidence.

For a while it was almost comical as I would expose UNRWA hate online and UNRWA would silently take down the websites. But this isn’t a game of whack-a-mole – this is proof positive that UNRWA teachers are teaching generations of students to hate Jews, to support terror, to deny or even approve of the Holocaust. There are no investigation into these incidents by UNRWA. There is only removing the evidence and keeping the teachers happily employed, while asking them to not be so public about their hate to protect their funding.

And pro-terror posts like this one are still to be found on Facebook pages of UNRWA teachers. (In this case the teacher is anonymous, but he lives in Khan Younis.)

UNRWA does not want to fix the problem. They never have. And this proves that UNRWA is the problem that needs to be fixed.