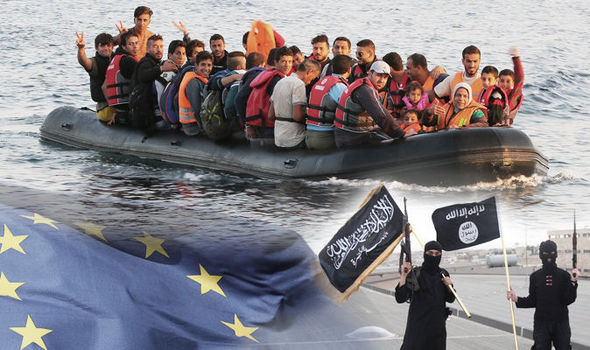 ISLAMIC State terrorists are taking advantage of the waves of western sympathy towards would-be asylum seekers and sending trained operatives to Europe hidden among migrants crossing the Mediterranean in boats.

A sea-change in Britain and Europe’s approach to dealing with asylum seekers from north Africa and the Middle east was triggered last week when pictures of the body of three-year-old Aylan Kurdi washed up on a Mediterranean beach emerged.

Celebrities, politicians and even the Pope have been queuing-up to state they wish to take migrant families into their homes.

David Cameron was today expected to announce that the UK will take 10,000 more migrants – despite previously arguing taking in refugees would encourage more people to risk the hazardous sea crossing to Europe.

But EU prosecutor Michele Coninsx, warned the charitable aims came with a potentially deadly caveat – that Isis terrorists and bombers are continuously being smuggled across the Med – hidden among migrants.

Coninsx, head of the EU’s judicial co-operation agency Eurojust, said she received the intelligence as part of the agency’s fight against illegal immigration, terrorism and cybercrime.

According to the prosecutor, ISIS and similar terror groups are also using money from people-trafficking to fund terrorism.

oninsx said that because Eurojust’s investigations are ongoing she could not divulge what EU countries have told the organisation.

But she insisted that the agency is “going after the criminals”.

The smugglers often mix with migrants travelling across the Med on boats, hoping they will not be caught. However dozens have been arrested in Sicily and other parts of southern Italy.

Britain has also been warned to prepare for “boats full of terrorists” if Islamist fanatics are able to cement their foothold in Libya.

Egypt’s ambassador to the UK warned there is a new threat from migrants flooding from north Africa, now that ISIS controls the Libyan costal town Sirte.

It comes after Downing Street announced last month that police and intelligence officers from the National Crime Agency, MI6 and GCHQ will head to North Africa to hunt African human trafficking gangs behind the Med migrant crisis.

Thousands of refugees are dying at the hands of criminal gangs exploiting their desperation to flee terror groups waging war on their homelands in Africa and the Middle East.

A Downing Street spokesperson said: “We have got to do more to break the link between getting on a boat in the Med and getting settlement in Europe.