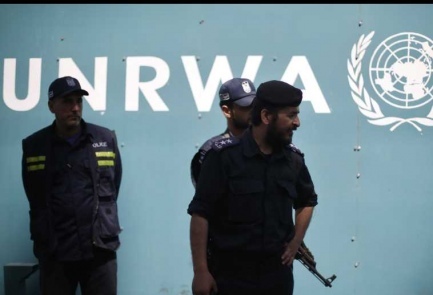 Working as a community organization social work professional and as a journalist who has run a research center and news agency since 1987, I have been involved in a 28 year effort to reform policies of UNRWA , the United Nations Relief and Works Agency.

The focus of this campaign is to influence nations that donate to UNRWA to predicate aid to UNRWA on five reasonable conditions:

Our research on UNRWA carefully documents the need for UNRWA reform in all five categories, as spelled out at http://israelbehindthenews.com/unrwa/ and as filmed at https://www.youtube.com/watch?v=LaaslaZk6mw&list=PL2ahnZleDp0c335BEOHhbB6SB2j2KMLGu

Ever since Hamas took over the teachers union in the Gaza in 1999, our agency raised questions about the fact that Hamas, designated as a terrorist organization by law in the US, EU, UK, Canada and Australia was now running UNRWA schools funded by these same donor nations.

UNRWA’s response over the years has been to deny the presence of Hamas in any UNRWA schools.

To discern if Hamas was​ ​really active in UNRWA schools, our agency hired staff to provide news coverage of UNRWA schools over the past 12 years, to document and filmed the Hamas in the UNRWA schools, while examining the UNRWA curriculum.

We discerned that Hamas, working inside UNRWA,​transformed the “right of return” cause into a violent religious crusade. .”Right of return” was now imbued by Hamas with sacrosanct values of martyrdom, Jihad and the armed struggle to liberate all of Palestine, for the sake of Allah.

Our agency shared evidence of the Hamas terror takeover of UNRWA schools with funders of UNRWA among the legislators of the nations that donate to UNRWA.

We presented our films in the legislative bodies of the US, UK and Canada, while screening these movies for 24 consuls of donor nations in special sessions at the Israel Knesset Parliament. As a result, Policy makers from the US, EU, UK, Canada and Australia have made an issue of the Hamas presence in the UNRWA schools.

​In June, a source at the US state department – which provided 33% of the UNRWA 1.2 billion dollar budget – informed our agency, before summer UNRWA programs commenced, that Hamas would not be allowed in this summer’s UNRWA activities. To see if that was the case, we dispatched TV crews to cover UNRWA summer activities​in Gaza, Judea, Jerusalem and Samaria.

The TV crews visited UNRWA educational camps for UNRWA children of all ages, and reported back that UNRWA educational camps this summer were devoid of Hamas and devoid of incitement.  UNRWA officials told the crews that this was due to “orders from above” to not allow any kind of incitement in the UNRWA summer camps. Instead, Hamas set up its own summer camps to teach incitement, which we indeed filmed. http://israelbehindthenews.com/hamas-hatred-new-documentary-shows-iranian-backed-terror-group-indoctrinating-kids/13612/

In other words, we won the first battle in the war for UNRWA reform.

Now, with the commencement of a new UNRWA school year in Gaza, Jerusalem, Judea and Samaria, where 492,000 students will learn, the question remains: Will there be “orders from above” – from donor nations – to cause a change in the UNRWA war curriculum? http://israelbehindthenews.com/unrwas-problematic-educational-role-in-the-middle-east-conflict/10747/

Will donor nations make sure that there are orders to cancel the Hamas quasi-military training clubs in the UNRWA schools, which we have documented so clearly? http://israelbehindthenews.com/unrwa-schools-in-gaza-a-greenhouse-for-hamas-and-anti-israeli-radicalism/10748/

Our agency has hired professional staff to report what school books are used by UNRWA in the new school year and to monitor Hamas presence in UNRWA schools in the new school year, so that the donor nations will know the transparency of their donations to UNRWA schools this year. The donor nations are clearly listed on the UNRWA web site: http://israelbehindthenews.com/wp-content/uploads/2015/08/2014-ranking-of-countries-making-contributions-to-UNWRA.pdf

LET US SEE IF, IN THE YEAR 5766, UNRWA DESERVES THAT SLOGAN.