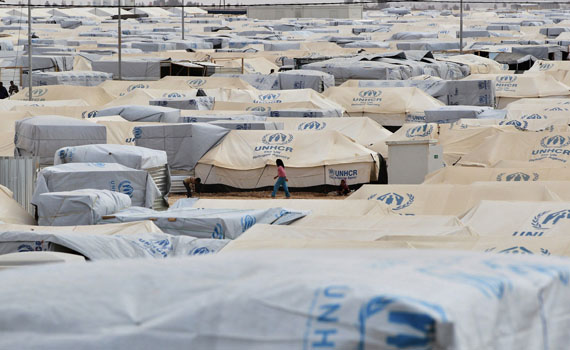 The civilized world is quite properly appalled — indeed horrified — by the unrelenting flow of desperate people pouring out of Syria. European countries, caught by surprise, scramble madly to cope with the human tsunami, while wealthy gulf countries sit on their hands and their fortunes, apparently unmoved by their neighbors — like them, mostly Muslim and Arab — who are dying to get out.

Make no mistake: The flight of refugees from the Middle East and North Africa is not just a regional problem. The world has not seen as many displaced people since the end of WWII, and the aftershocks of an earthquake of human suffering — caused by the pounding of running feet and the cries of drowning children — will be felt in every part of the globe.

Let’s begin with a practical question: Who will pay for resettling all these refugees?

When Germany offered to admit half a million refugees yearly, it estimated the cost to be more than 11 billion dollars a year. That’s just for half a million people, in just one country, in just one year. Where will the money come from to help truly needy refugees? I say we take it from the refugee scammers.

There’s a simple way to distinguish between true refugees and refugee scammers:
Refugees are folks running for their lives.
Refugee scammers have cable TV.

The Palestinian Refugee Project is the quintessential scam. Refugee scammers are part of an institutional complex of NGOs, UN agencies and corrupt governments who are in business to maintain a population in chronic economic dependence.

Countries who by all rights should have long ago resettled and integrated Palestinian refugees are enabled by the U.N. to deny them citizenship, deny them the right to work, deny them a normal life of dignity. Millions of people around the world have been displaced by war and successfully resettled in the past 60+ years. But a special interest group gains financial and political rewards by keeping generations of Palestinians in camps, even while they live under their own elected leaders.

Today we are bombarded with images of genuine refugees. It is time to call the Palestinian refugee industry the scam that it is.

The United Nations Relief and Works Agency (UNRWA) was established in 1948 as a temporary institution. It has become the U.N.’s largest entity, with over 30,000 employees – all of whom would be out of work should the “refugees” be settled in the countries in which they live. The organization is widely recognized as corrupt. Even the Palestinian refugees themselves have protested against them!

The U.S. contributes to UNRWA’s budget, and thereby enables the scam. The organization is awash with international aid and European NGO money for keeping the grandchildren of refugees living in squalor. And who works for UNRWA? They admitted to the U.S. Government Accountability Office (GAO) that they do not screen potential staff (or aid recipients) for ties to terrorist groups such as Hamas, Islamic Jihad or Hezbollah.

Two pictures were published in the same week, and they say it all. The first was the iconic image of today’s refugee crisis: a young boy who drowned along with his brother and mother, on their journey to safety.

The second is my nominee for the iconic photo of the refugee scam. It is the planned 13 million dollar palace being built by Abbas, the president-for-life of the Palestinian Authority, whose third generation Palestinian “refugees” are living on U.N. handouts.