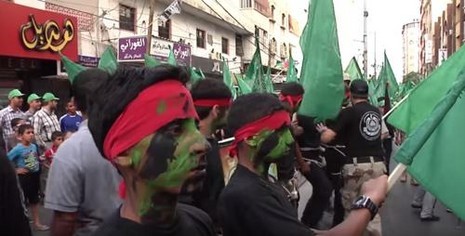 In a new video that was uploaded to Youtube, children in a Hamas summer camp are being taught to work for the destruction of Israel with Iranian weapons. David Bedein, director of the Center for Near East Policy Research, stressed: “This footage portrays the human face of Iran’s conventional terror threat.”

David Bedein, director of the Center for Near East Policy Research, recently exposed that Hamas runs weapons training camps for 15,000 boys and girls age 12-16 in 50 different locations in Gaza utilizing an arsenal that has been provided by Iran over the years. While UNRWA was absent from the camps this summer following instructions from the US, Bedein noted that all of these children still study in UNRWA schools and were already intellectually raped by the UNRWA education system, where they were educated to liberate all of Palestine by force of arms for Allah, thus conditioning them to be exploited by Hamas and Iran: “The footage portrays the human face of Iran’s conventional terror threat.”

“Girl counselors were interviewed about training young females to destroy Israel and liberate both Palestine and Jerusalem, passionately speaking about an uncompromised right of return to their homes that their grandparents left in 1948,” Bedein explained. “Armed and uniformed boys were interviewed as they marched in a quasi-military procession in Gaza. The Boys and girls brandished the massive weaponry received from Iran. The Hamas leaders rallied throngs of young people that screamed in unison to renew the PLO war to liberate Jerusalem and all of Palestine, describing Jews as pigs who must be thrown out of a Muslim entity.”

He noted that UNRWA students were paraded by Hamas with huge signs calling for a right of return and the conquest of Al Aqsa Mosque in Jerusalem: “Many reported this summer’s military training in Gaza. This is the first footage which shows graphic images and interviews of youngsters indoctrinated by UNRWA for a generation to wage war against Israel. This is the first footage that connects the dots between UNRWA, Hamas, and Iran, showing what it will be like if Iran will be capable of tremendously increasing its financial support for such terrorist activities.”

“The eminent danger is not only about nukes but rather about the Iranian sponsored terror network that will rain down upon the US, Israel, Latin America and the rest of the free world,” Bedein stressed. “Iran’s lethal support for the armed Palestinian terror groups is well known. If Iran is capitalized by the new pact, it could finance terror squads across the globe, as the murdered Argentinian prosecutor Alberto Nisman warned in the report that he filed for the Argentinian government, which exposed the background of the Iranian sponsored murder attacks which took place in 1994 in Argentina, as a precedent for Iran spreading terror tentacles around the world. Nisman cannot speak out now against the lethal consequences of an accord that would allocate billions to an Iranian terror regime.”

Bedein emphasized that AIPAC and the Israeli government made a major mistake by only focusing on the nuclear issue and not the conventional threats posed by the Islamic Republic because most Americans under age 60 don’t know what it is like to face such a threat and thus don’t comprehend the dangers posed by empowering Iran via sanctions relief. He noted that it has already been exposed that Iran has sleeper terror cells throughout Latin America and across the globe, which will be strengthened as a result of the Iran deal: “What happened in Argentina can now happen ten times over.” According to Bedein, the existence of Iranian weapons in Gazan summer camps is only a taste of what is to come unless the Republicans somehow manage to miraculously transform the present situation at the last moment.