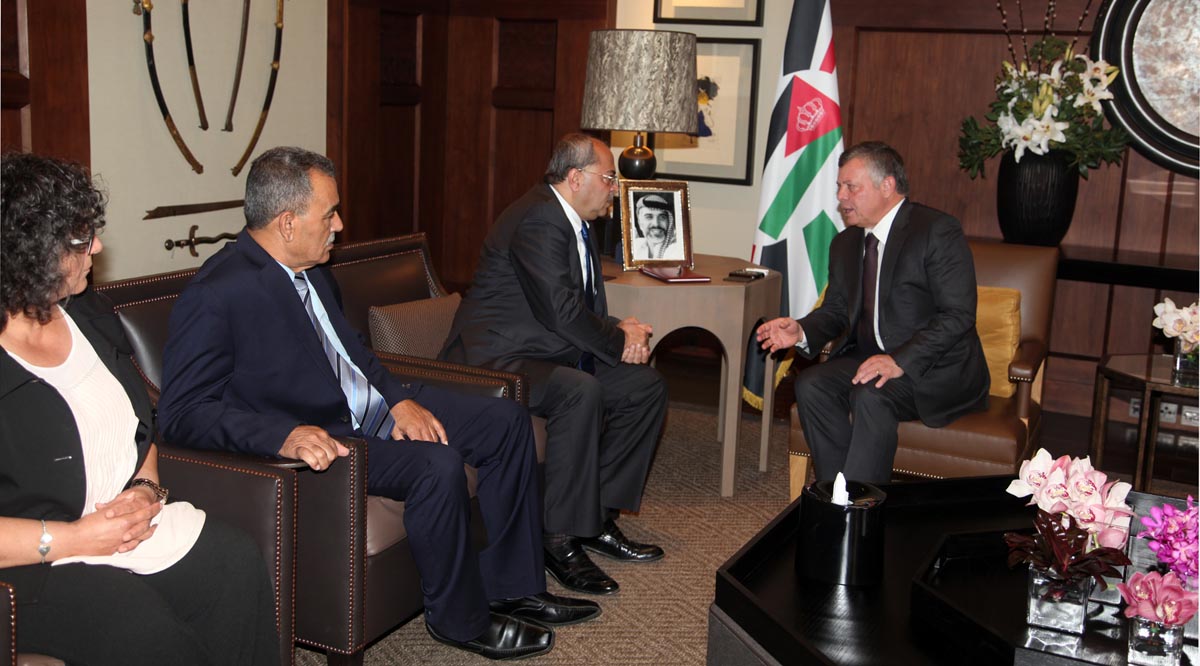 Jordan’s diplomacy has recently scored a success as the UN Security Council, under intense Jordanian lobbying, released a statement recognising the Al-Haram al-Sharif” by its name, instead of Israel’s preferred reference to it as “the Temple Mount”.

During a meeting at Al Husseiniyeh Palace, the King reiterated Jordan’s support for the Palestinian people and their just cause, and pledged that the Kingdom will continue defending Jerusalem’s Islamic and Christian holy sites.

King Abdullah briefed the delegation on Jordan’s intensive efforts and contacts he had made with various regional and international parties to stop the Israeli attacks and violations in the Al-Aqsa Mosque and the Al-Haram al-Sharif (Noble Sanctuary).

Jordan’s diplomacy has recently scored a success as the UN Security Council, under intense Jordanian lobbying, released a statement recognising the Al-Haram al-Sharif” by its name, instead of Israel’s preferred reference to it as “the Temple Mount”.

The continuation of Israel’s provocative behavior towards Jerusalem and its holy sites and its attempts to Judaize the holy places will have grave repercussions on the region and its security and stability, and will inflame religious conflict with dire consequences, the King told the Arab MKs.

He stressed that Jordan will continue to deal with all Israeli violations and practices, defend Jerusalem and perform its religious and historical duty stemming from the Hashemite custodianship over the Islamic and Christian holy places in the city.

The Al-Aqsa Mosque, Al-Haram al-Sharif compound, is indivisible and not subject to be shared, the King said, referring to an Israeli plan to divide the compound in terms of prayer time and space.

He denounced Israel’s false claims through its propaganda to the world to justify its attacks and measures in holy Jerusalem.

His Majesty also emphasised the importance of the role of Israeli Arab leaders in supporting efforts currently underway aimed at protecting Jerusalem and its holy sites.

The Israeli Arab lawmakers said they appreciated the King’s role and the Hashemites’ custody of the holy shrines, commending his tireless efforts to safeguard the city’s Arab and Islamic identity and noting his support for its Waqf (religious endowment) authority.

They also referred to the King’s efforts last year to lift restriction imposed by Israel on the entry of Palestinians to the Al Aqsa, noting that the number of worshippers had risen to 350,000 on Fridays during the holy month of Ramadan.

The five-member team of Arab lawmakers, led by MK Ahmad Tibi, pledged to undertake a more active role in supporting the Palestinian-Israeli peace process and stopping the Israeli attacks in Jerusalem.

Tibi, head of the Jerusalem Committee of the Joint Arab List at the Knesset, said the delegation spoke to the King on their vision about the serious plan being drawn by the right-wing government of Prime Minister Benjamin Netanyahu, including the recurrent storming of the Haram Al Sharif Mosque.

“Today’s meeting is of major importance given the special Jordanian role and the Hashemite custody of Al Aqsa Mosque and the holy shrines when Israel  behaves in this provocative manner”, Tibi told Petra in an interview.