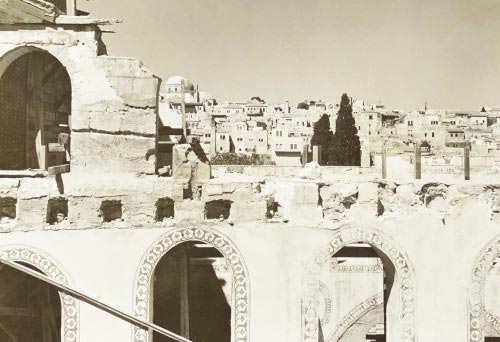 The current Mufti of Jerusalem, Sheikh Muhammed Ahmad Hussein, declared on October 25, 2015, that the Al-Aqsa Mosque was a mosque built on the site “3,000 years ago, and 30,000 years ago… since the creation of the world.”

In his interview with Israel’s Channel 2, the Mufti also insisted that there never was a Jewish Temple or shrine atop the Temple Mount.3

Jews believe that the “foundation rock” beneath the Dome of the Rock is atop Mt. Moriah, the site of the binding of Isaac. King Solomon built his Temple upon the rock in the tenth century before the Common Era (BCE), but it was destroyed in 587 BCE by the Babylonian King Nebuchadnezzar. Seventy years later, the second Temple was built by Jews returning from Babylon with King Cyrus’s blessing. Years later it was rededicated by the Maccabees in approximately 160 BCE after its defiling by the Seleucids.

In the first century BCE, the Second Temple, built by the returnees from Babylon, was rebuilt and massively expanded by King Herod. To accommodate the large Temple building and administrative offices, the Mt. Moriah plateau was expanded to become a colossal platform with huge retaining walls. The Western Wall, the prayer site for Jews over the centuries, was part of the retaining walls. Roman armies commanded by Titus destroyed the Temple in 70 CE.

Muslims believe that Muhammed (570 – 632 CE) was transported on a heavenly creature from Mecca to the Al Aqsa Mosque and then to heaven in his “Night Journey.” The mosque was constructed in the late seventh century CE and rebuilt several times after major earthquakes destroyed it.

The golden Dome of the Rock is a shrine built over the foundation stone in 691 CE.

The 1927 Earthquake Revealed More about the Mosque

The current Mufti surely knows that the Al Aqsa Mosque suffered a major collapse during an earthquake in 1927. Renovation took several years, and in that period at least two Christian photographers, including British archeologist Robert Hamilton, ventured into and under the mosque. Hamilton, from the British Archaeological Authority, “photographed, sketched, excavated and analyzed” what he saw, according to Nadav Shragai, a scholar on Jerusalem, writing in Yisrael HaYom.4 But Hamilton promised the Islamic Authorities, the Waqf, that he would make “no mention of any findings that the Muslims would have found inconvenient” such as findings from the time of the Jewish Temples. The photographers documented the mosaics, passageways, cisterns, and lumber that apparently were part of the Temples.

Many of Hamilton’s photos may be viewed today on the site of the British Authority’s successor, the Israel Antiquities Authority.5 Other pictures may be found in the Library of Congress’ archives of the American Colony photographers.

Under the Al Aqsa Ruins

The two photographers documented what they found under the al Aqsa ruins, on the other side of the sealed “Double Gate” (Sha’arei Chulda) along the interior of the southern wall of the Temple Mount. The American Colony photographer captioned this picture, “The Temple area. The Double Gate. Ancient entrance to temple beneath el Aksa.”7

Many of these sites and structures may have been destroyed in recent years by the Waqf’s (Muslim Council) bulldozers during their construction of subterranean mosques under the Temple Mount. Fortunately, photographs still exist and were digitized by archivists so we can document what were probably parts of the Jewish Temple complex and what the Mufti denies.

Secrets under the Al-Aqsa Mosque: A Photographic Essay