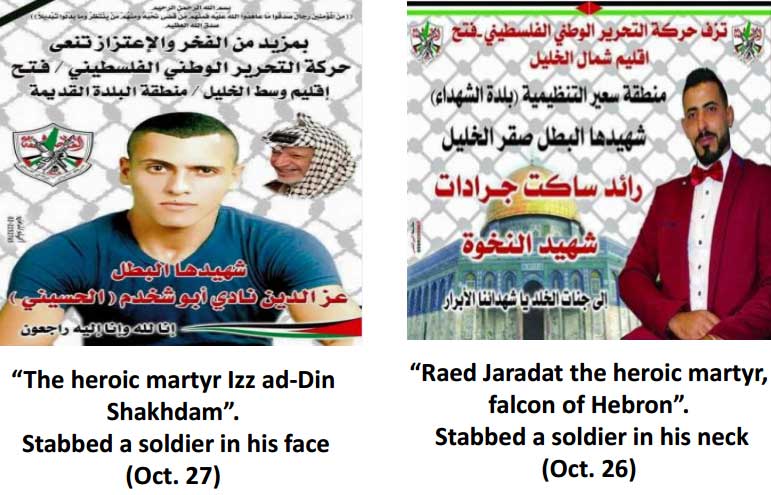 1.- The wave of Palestinian violence and terrorism currently plaguing Israel began during the most recent Jewish High Holidays. In retrospect, the ITIC has concluded it began with the stones thrown at the vehicle of Alexander Levlowitz near the Armon Hanatziv neighborhood of Jerusalem on September 14, 2015. Initially the wave of violence and terrorism focused on the Temple Mount and east Jerusalem and later spread throughout Jerusalem and to other sites inside Israel and various hotspots in Judea and Samaria (especially the region around Hebron). So far 12 Israelis and more than 70 Palestinians have been killed.

2.- The current wave of violence and terrorism is part of the overall “popular
resistance” strategy adopted by the Palestinian Authority (PA) and Fatah at the
Sixth Fatah Conference in August 2009.

It is manifested by rising and falling levels of popular terrorism. The current wave (which is unique in some aspects) is one of the most serious. Its popular terrorism includes riots, throwing stones and Molotov cocktails, and stabbing and vehicular attacks which are supported and condoned by the PA. The current wave of Palestinian terrorism, like those before it, has included several shooting attacks, which are not included in the modus operandi of the “popular resistance,” but the PA does not condemn them, and in effect
supports them.

3.- This study examines the profiles 35 Palestinian terrorists who carried out attacks in Israeli territory (Jerusalem and other locations inside Israel) during the current wave of terrorism. Twenty-four of them were killed while carrying out the attacks and 11 were injured. They carried out a total of 29 terrorist attacks, most of them in greater Jerusalem and some in other locations inside Israel.

Their personal attributes were different, but based on the initial examination a general profile can be drawn.