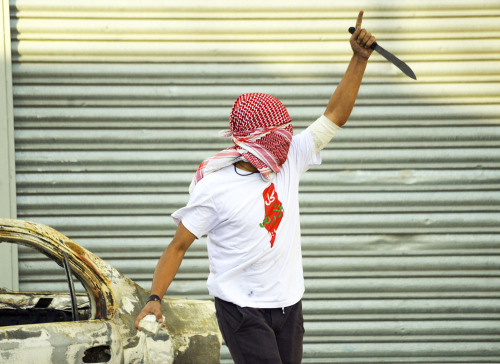 On Friday, October 30, the primetime show The Agenda on Ontario’s TVO network, with anchorman Steve Paikin, explored the question of whether the Palestinian violence marks the beginning of the Third Intifada.1

Two interviewees were asked to give their assessment: Yoni Goldstein, editor of the weekly Canadian Jewish News, and Khaled Elgindy, a fellow of the Brookings Center for Middle East Policy and former adviser to the Palestinian Authority on permanent-settlement issues from 2004 to 2009.2

Elgindy presented a distorted picture of the situation that pins full responsibility for the Palestinian violence on Israel. He asserted that a new intifada would probably be a better option for all of the sides, because it would be organized and would seek clear-cut objectives. In other words, Elgindy implied that a wider outbreak of violence, which would wreak numerous civilian deaths like the Al-Aqsa Intifada that began in September 2000, would be better than the current level of Palestinian violence, which so far has not succeeded to kill large numbers of Israelis.

Elgindy went on to say:

Israel has arrested hundreds of Palestinians basically just mass arrests rounding people up. It has shot into crowds of unarmed protestors. There is a sort of ‘shoot to kill’ policy that appears to be the main rules of engagement for Israeli security forces where they shoot first and ask questions later. And we saw just the other day, the Israeli police conducted an investigation into a Palestinian woman who was shot in the city of Afula and they found in fact that she wasn’t carrying any weapon. That the initial report that she had a knife was false and that she was simply executed for no reason.

To put it mildly, Khaled was not speaking the truth. There have been no cases whatsoever of Israeli security forces shooting into innocent crowds.3 The casualties among the Palestinians stem from the multitude of terror attacks against Jews, of which there have been many hundreds just in the last month. The arrests being made are not random, but are responses to violent activity or to intelligence information. Israeli open-fire orders do not allow shooting to kill except in life-threatening cases, such as the use of firearms, firebombs, knives and potentially lethal stonings.

The blood libel against Israel has reached a peak with the description of the incident where the woman in Afula was shot. The facts are entirely different from those Elgindy presents in his version.

The female attacker was not Palestinian, but rather an Israeli Arab residing in Nazareth named Asra Awad. She was not “executed,” but rather moderately wounded in her lower extremities by the gunfire and treated in a hospital.

The indictment against her, which was served by the Northern District Attorney’s Office, includes violations of wielding a knife and making threats, and states among other things:

On the background of the security situation in the country, which includes stabbing attacks during which perpetrators have been shot to death, the accused exploited the situation and impersonated a terrorist/perpetrator in order to commit suicide. It further emerges from the evidentiary material that she planned to arrive at the central bus station in Afula, where security forces are located, and impersonate a female terrorist seeking to carry out a stabbing attack with the aim of being shot and killed by those forces.

On the morning of the day of the incident, the accused sent text messages to someone close to her with hints of her intentions; it also emerges from the evidentiary material that she wanted to perform a heroic act like a shahid before her death. The accused armed herself with a knife and went up to a group of people that included soldiers, took out the knife, openly raised it, and shouted threateningly at them: “You are terrorists!”

Elgindy indeed adopts the propaganda line of the Palestinian Authority and Hamas, which falsely accuse Israel of “executions” of “innocent” Palestinians even though, in reality, terrorists are being killed to thwart their attempts to murder Jews by stabbing them with knives or ramming them with vehicles.

How a Blood Libel against Israel Is Born