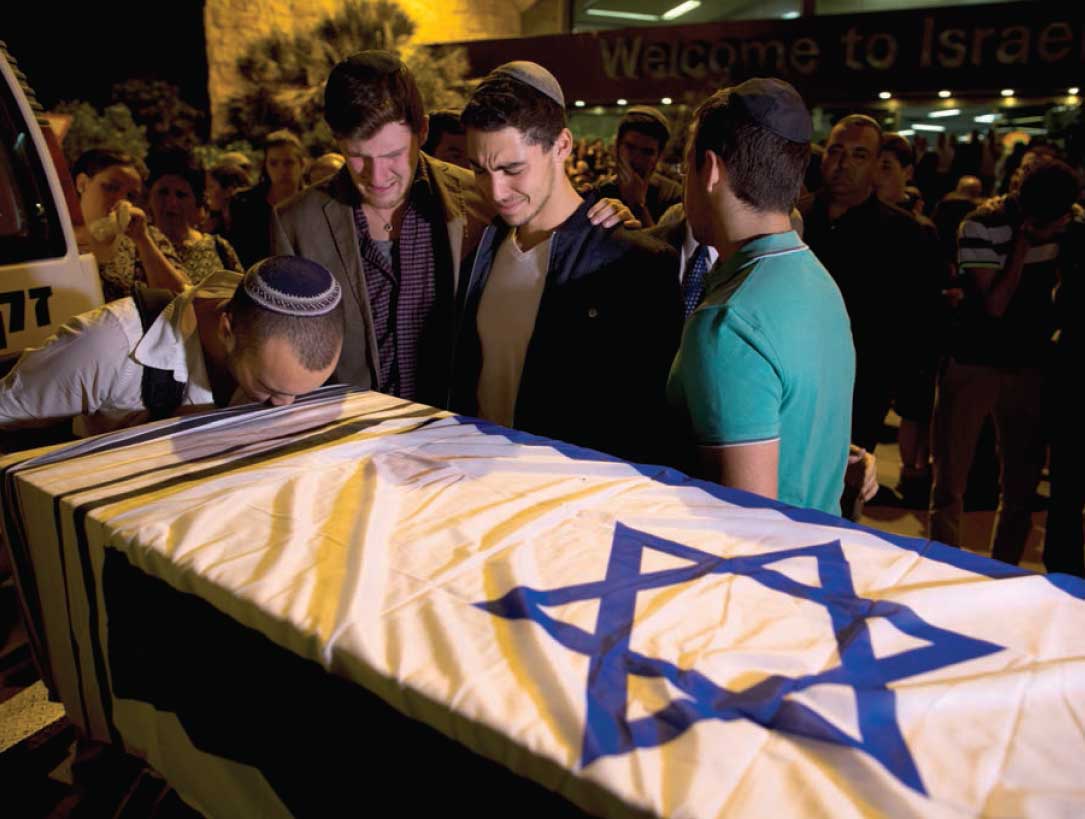 On Thursday, November 19, Machmad Abad Albast Alcharov, from a small town near Hebron, went on a shooting spree in Gush Etzion, firing a gun from his car at random, resulting in the deaths of 18-year-old Ezra Schwartz of Newton, along with an Israeli schoolteacher and a Palestinian bystander. After the rampage, Alcharov emerged from his car with his hands up at the nearby traffic circle, surrendering to Israeli troops and police.

While the PA describes the recent spate of attacks on civilians as a fight against aggressive Israeli armed forces, Ezra Schwartz hardly fit that description. He was simply a young American student in Israel, devoted to his studies and to the sport which he loved best of all: tackle football.

Jonathan Hauser, 33, also a Newton native, knew Ezra through his cousin, Austin Hauser, also 18, because they all played together on the new Israel tackle football league, pioneered by Patriots owner Robert Kraft nine years ago as a part of AFI, “American Football in Israel.” Kraft flew Austin and 15 of Ezra’s friends to accompany Ezra’s body for burial in Boston, after which the boys accompanied Kraft and the Patriot team, and the entire stadium and international TV audience in a moment of silence for Ezra Schwartz.

Jonathan Hauser appeared on Israel’s most popular radio morning talk show on the morning after Ezra’s funeral and expressed his shock at the murder of his cousin Austin’s best friend. On the show, Jonathan described Ezra as a young man with endless energy who devoted time after a full day of intense Yeshiva learning to play tackle football several times a week in the AFI. Hauser also lauded the initiative that Kraft had taken to fly Austin and friends over to the funeral. Meeting Jonathan Hauser in person, Jonathan expressed his new sense of responsibility to help cousin Austin and friends cope upon their return with the loss of their friend Ezra.

At Ben Gurion Airport Saturday night, late night Israel TV news followed hundreds as they gathered to accompany Ezra to the flight that would bring him back to Boston and to his burial.

Though the gathering was not publicized and was intended for those who knew Ezra and his family, more than 1,000 people showed up. Ezra’s classmates stood in a large circle, some draped in Israeli flags, swaying back and forth with their arms around one another singing song after song. The songs were not about revenge, anger or violence, but were of faith, longing for peace, love of Torah and Eretz Yisrael. The final song they sang before the short memorial began was Israel’s national anthem, Hatikvah.

The first speaker was former refusenik and current chairman of the Jewish Agency, Natan Sharansky. He described that when he spoke to Ezra’s father, Dr. Schwartz had the presence of mind to share his memories of marching on behalf of Soviet Jewry when he was a student. Ezra’s uncle read an e-mail from Ezra’s father, in which he thanked everyone for their help and for this gathering. Ezra’s father wrote that he doesn’t regret sending Ezra to Israel and knows that sending him to learn and grow and be part of the people of Israel was the right thing to do.

Taken into custody, Machmad Abad Albast Alcharov’s name was featured on the intenet media of the Palestinian Authority, which immediately granted him a financial reward, in accordance with the “Palestinian prisoner protection act,” passed by the PA parliament, which provides an automatic grant of 14,000 shekels, more than $3,000, to and comfort with which Islam executes for what we would consider a petty violation, and so there is a heavy focus on the application of justice to the detriment of the compassion element, and with Christianity it’s the other way around. Lapin’s action plan for Americans in responding to Islamic terror and the question of Syrian refugees represents finding balance.

“The challenge is negotiating the tightrope cross between these two opposing ends of the spectrum,” explained Rabbi Lapin. “I would suggest that what we have to do is drive the conclusion on the basis of the facts, avoiding any emotional advocacy that would tend to overwhelm a rational analysis.”

anyone who is jailed for killing a Jew.

That law also mandates a monthly income for the killer and for the family of the killer in jail.

In other words, the Palestinian Authority is now implementing a law, which makes it profitable to murder Jews.

David Pearl, Mayor of the Gush Etzion Regional Council expressed his “shocked condolences to the American people and to the Jewish community in the United States following the cold blooded murder of Ezra Schwartz on November 19, 2015” and “called upon all American citizens to ask that U.S. Secretary of State John Kerry demand that PA chairman Abbas nullify the PA law which honors those who murder Jews in cold blood.” Gush Etzion is located 40 minutes east of the Yeshiva where Ezra studied in Beit Shemesh. That is where Ezra did one day of volunteering, with a group that planted trees and brought refreshments to soldiers on duty. Senators Warren and Markey of Massachusetts were asked for comment on the fact that the PA offered a financial reward to someone who murdered an American citizen and a Massachusetts resident. Both Senators declined comment. However, Dov Lipman, a Beit Shemesh Rabbi who served in the previous session of the Israel’s Knesset Pa r l i a m e n t , issued the following statement:

“As someone who grew up in the United States, I would expect the U.S. government to look into this issue and to raise its voice of protest if, in fact, the murderer of a U.S. citizen received rewards from the Palestinian Authority. As an Israeli who values the U.S.-Israel relationship I would hope to hear that voice of protest from the U.S. if terrorists are receiving financial rewards from the PA for the killing of Israelis.” When Machmad Abad Albast Alcharov stands trial for murder, it will be instructive to learn if the reward motivated him to murder a school teacher, a Palestinian bystander and Ezra Schwartz, the 138th American citizen to be murdered by a Palestinian terrorist.