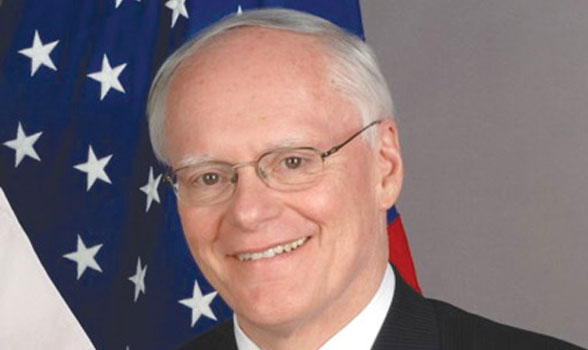 IMRA: Read Ambassador James F. Jeffrey’s assessment of
the tremendous instability in the region and one thing is clear: anyone
suggesting that Israel engage in a program according to which it relies on
regional “partners” or “arrangements” demonstrates, a priori, such a
profound lack of understanding of the region that any policy recommendation
they make should be treated with extreme care and review.]

The “Arab Spring” of 2011-12 has profoundly changed the Middle East, but
much is misunderstood about its effects. First, it did not produce, other
than in Tunisia, lasting liberalization and more democracy in the states of
the region. Second, the Arab Spring was not just “Arab,” but it also had an
Iranian element in the popular reaction to the rigged 2009 elections, as
well as a Turkish element in the Gazi Square protests in 2013. Furthermore,
the Arab Spring did not all take place in 2011-12 but over a longer period.
Finally, ‘aftershocks,’ such as popular protests this year in Iraq, continue
to be seen, and a definitive assessment of the phenomenon and its impact
will have to await more time.

But what we can say, as one analyst put it recently, is that the Arab Spring
replaced ‘deep states’ with weak states. By deep states one means those
semi-democratic (Turkey, Iran) or non-democratic (Syria, Libya, Egypt,
Bahrain, Yemen) states with engrained bureaucratic, military, intelligence,
and business interests subtly dominating a supposedly constitutional system.
In all but Iran, those ‘deep states’ have been decisively weakened. Libya
and Yemen have collapsed, Syria is in tatters, and Egypt is politically and
economically at a dead end with ever-increasing Islamist challenges
including insurgents associated with al Qaeda and ISIS. The deep states
survived in Iran, Bahrain and Turkey, but the election of reformist
President Rohani in 2013 in Iran, and the initial defeat of President
Erdogan’s party in the June 2015 Turkish parliamentary elections,
demonstrate that even those two relatively homogenous states (among the few
true states along with Israel in the region) have much to fear from their
own populations.

But elsewhere, the primary impact of the Arab Spring has been to weaken
traditional, constitutional, and “deep state” generated stability without
any real replacement. This development is complemented by two others, which
have turned the region into a cauldron of conflict. First is the rise of
pan-regional Islamic movements such as ISIS, the far more dangerous ‘son’ of
al Qaeda, and an Iranian hegemon, fueled by its sense of ‘success’ winning a
nuclear accord with the international community and especially the U.S., and
by its twinned Shia and Persian makeup. The second complementary phenomenon
is the major retrenchment of the U.S. at a time of crisis when traditionally
the U.S. would be intervening dramatically and dynamically. While the Obama
Administration maintains some Middle Eastern priorities, including the
nuclear deal with Iran and a largely desultory air campaign now with limited
Special Forces raids against ISIS, its heart is not in the Middle East.
Rather, the climate accords, a pivot to Asia, the engagement/containment of
China, and domestic issues dominate the Obama White House.

The resulting cauldron of conflict is rapidly spreading. The traditional
American ally states of the region do not have the strength to tackle the
twin challenges of ISIS and Iran on their own, with the U.S. more-or-less
AWOL, and most of our usual key partners—Egypt, Saudi Arabia, and
Turkey—having to worry about domestic discord and internal conflicts (ISIS
in all three, Muslim Brothers in Egypt, Shia minority in Saudi Arabia, and
the PKK in Turkey). These internal conflicts of course are fueled by
popular discontent inspired by the Arab Spring,

Adding to the poisonous cauldron, the collapse of Syria and the resulting
emergence of ISIS has produced yet another destabilizing element. Russia is
now on the scene, ostensibly to join or ‘lead’ the anti-ISIS fight, but in
fact, to shore up Moscow’s ally Assad and partner with Iran to pull down the
American security system in the region as much as possible. In the eyes of
many in the region, President Obama is not all that interested in serious
effort and sacrifice to defend that system, further imperiling it.

The current extremely dangerous and chaotic situation in the region, with
every chance of growing worse, cannot be chalked up to the brave citizens
throughout the Middle East who risked life and limb to march for a better
future. They have been betrayed by the flaws in their own societies, the
refusal of states to reform, and the forces feeding the flames (Russia,
Iran, ISIS). Others relied upon for stability (the U.S. first of all, but
also Europe, the UN, and the ‘international system’ writ large) have
more-or-less absented themselves.

Even in a world with “near peer,” anti-status quo states Russia and China on
the prowl, dealing with this cauldron of conflict will be Job One for the
new American President, who will have his or her hands full with this
headache.
==================
Ambassador James F. Jeffrey is the former U.S Ambassador to Iraq and Turkey.
Currently, Ambassador Jeffrey is the Philip Solondz distinguished fellow at
The Washington Institute where he focuses on U.S. regional, diplomatic, and
military strategy, as well as Turkey, Iraq, and Iran. He previously served
as assistant to the president and deputy national security advisor in the
George W, Bush administration, with a special focus on Iran.