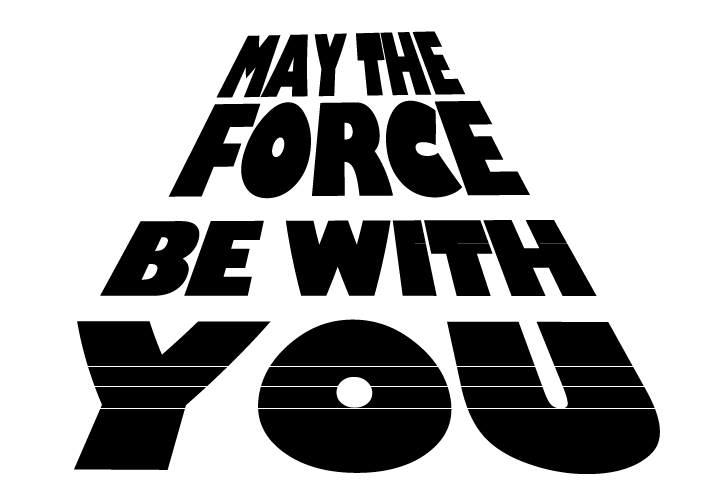 This week has seen the release of the latest Star Wars movie in many countries, including Israel, where because of the time difference, fans were able to view it many hours ahead of its premiere in the USA.

There is a unique aspect to the series which should resonate with Jewish audiences. For those cognizant with our own historical experiences over the last few thousand years the struggle between the forces of good and evil as depicted in the movies, highlights in many aspects the challenges faced by ancient and modern Israel.

We have faced the machinations and hate of the greatest evil empires this world has ever seen. Despite our minuscule numbers and our exile for many periods in hostile lands miraculously we have overcome the worst adversities. At the end of the day those evil empires have disappeared from the scene and the Jewish People are still here. Even the most convinced skeptic cannot explain this seemingly illogical fact. However the answer is clear for anyone who really wants to know. Since the dawn of Jewish history from Abraham & his family onwards, the force has been with us. One does not need to be a religious person to acknowledge that there is something or someone else at work here which has ensured our survival against all odds; not only our survival but the restoration of Jewish sovereignty in the land which is so fundamental to our very being.

As we should have learnt from history the ability to defend ourselves and more critically exact justice against those who desired our demise plays a very important part in broadcasting a message to the perpetrators. It was not always possible for Jews to fight back and thus the stereotype of meek submission to an inevitable fate was born. It is important to remember this fact because the rebirth of Jewish statehood a mere sixty-seven years ago has created shock waves in certain circles. The spectacle of Jews actually standing up to haters and murderers has come as a shock to large parts of the international community. Not only have the traditional and reborn Judeophobes had their prejudices shattered at the sight of Israelis beating their enemies but even worse, from their point of view, has been the unrelenting pursuit to make the terrorists pay for their crimes. That explains why the United Nations collectively and particular countries individually join together in a chorus of condemnation every time Israel tracks down and deals with these killers of innocent civilians. This shameful hypocrisy is also a symptom of the double standards and lack of moral fiber which now envelopes the corridors of power in Europe, USA and elsewhere.

Take a look at just some of the events since 1948 which very clearly illustrate the situation.

At the end of the Second World War, apart from the major war criminals who were tried at Nuremberg, most of the others who had played a willing part in the Holocaust managed to merge into the background in whichever country they had settled. The enthusiasm to track down and prosecute murderers soon waned as the Cold War took hold and Governments lost interest. It is fair to say that if not for Simon Wiesenthal, the whole subject of culpability would have vanished forever. From 1948 onwards his lonely campaign was helped by the Jewish State’s involvement. Not everyone thought it was productive or a good idea to spend time and money tracking down those Nazis who had escaped justice. Despite other pressing problems which Israel faced, efforts were made to do something. It was not an easy task because in many cases the trails had become cold, names had been changed, local communities protected the hunted and natural causes eliminated quite a few.

Who, alive at the time, can forget the electrifying news of the capture of Adolf Eichmann and his subsequent trial in Jerusalem? This audacious and daring exploit brought the wrath of nations down on Israel, not for the first time and certainly not the last. Here was something of epic Biblical proportions being played out in the twentieth century. Even today in 2015, dedicated Nazi hunters such as Efraim Zuroff make sure that justice although severely delayed is ultimately meted out to those whose crimes should know no statute of limitations.

Just as Nazi war criminals must never be allowed to rest easy, the same needs to apply to each and every person who plots and carries out murderous carnage against Jews wherever they may reside. That is why after the Olympic Munich massacre of Israeli athletes, the perpetrators were eventually hunted down and eliminated. The same principle applied to the hijackers of the Air France plane. In a scene eerily reminiscent of wartime selections, Jews were identified and held hostage. The Entebbe rescue, an unparalleled episode straight out of a star wars movie, not only saved the hostages but also disposed of their kidnappers.

During the Nasser regime in Egypt, ex. Nazi scientists were engaged in developing rockets. Realising that this posed an existential threat, Israel made sure that these plotters of genocide received the message that continuing with this work invited premature departure from this world. The same message no doubt is being delivered to Iranian experts engaged in similar tasks.

Over the years the numerous Arab terrorists who have massacred Israeli children on their way to school, mothers taking their youngsters to kindergarten and civilians going about their daily lives, have also faced retribution in one form or another. Where the opportunity arises they are arrested and given a fair trial and then incarcerated. Israel only has the death penalty for Nazi war criminals and it is a source of much contention as to whether these hate filled specimens of humanity should be fed, clothed, housed and often educated at the expense of taxpayers. Exchanging these terrorists for Israelis (dead and alive) who have been in terrorist custody has often been undertaken. The result has generally been a disaster because many of the released murderers quickly resumed their terror activities.

More effective by far is the permanent elimination of each and every individual who dares to stab and shoot so that they cannot at the time of their crime or subsequently on release from jail, engage in further such behaviour. There are those who argue that by denying due process we are descending to the level of the terrorists. Obviously when an attacker is disarmed and disabled and more often than not receives first class medical attention in an Israeli hospital, he or she must be tried in a court of law and be incarcerated following a guilty verdict. Jail conditions should certainly be harsher so that those incarcerated are not treated as though they are in a holiday camp.

Often, however, circumstances are such that the only alternative is to permanently eliminate the terrorist. This could be because innocent lives can be saved or as a result of terrorists escaping and seeking sanctuary in terror supporting countries or amongst like-minded groups. In these cases there can be no amnesty or safe hole where murderers are able to evade being held liable for their crimes. The latest example of this policy was the death of Samir Kuntar in Damascus. This perpetrator of the most heinous murder of Israelis had been jailed and eventually released in a prisoner exchange. He was greeted as a hero by Syria & Iran and almost immediately resumed terror activity. It is reported that he was planning another major attack when he was targeted.

This week memorial gatherings took place in amongst other places, the Palestinian Authority where officials close to Abbas eulogized and lauded Kuntar. Ignored by the hypocritical international community and the media is the fact that the “peace partners” we are urged to embrace, refuse to condemn Kuntar’s barbaric crimes and instead praise him as a martyr and victim.

The bottom line is clear. These murderers will be held accountable in one way or another and no matter how long it takes.

So long as the force is with us we cannot fail to defeat the evil designs of our adversaries.

May the force be with you…writes Michael Kuttner

May the force be with you…writes Michael Kuttner