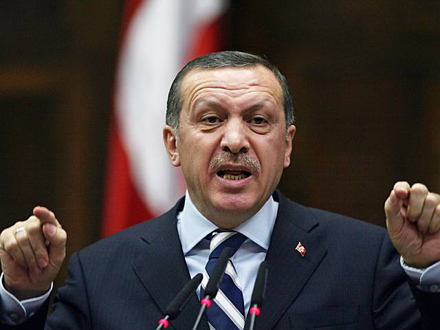 Turkish President Tayyip Erdogan is known for his flareups and his oversized ego.

Years ago, the late Middle East expert Professor Barry Rubin revealed to me that every foreign diplomat who receives an audience in the residence of the Turkish leader gets instructions on how not to provoke an outburst of anger in the conversation with Erdogan. The diplomats were advised to refrain from criticism and to pay maximal respect to the president.

The Turkish president is also known for his autocratic behavior at home. He has jailed numerous journalists who dared to publish articles that were openly critical of the Erdogan regime, and has manipulated democratic elections so that his AKP party would regain an absolute majority in the Turkish parliament.

The current crisis in Russian-Turkish relations is related to Erdogan’s problematic behavior.

The Turkish president thought he could stand up against Russian President Vladimir Putin after the Russian intervention in Syria, but overplayed his hand when Turkish F-16 fighter jets shot down a Russian warplane that briefly crossed into Turkish airspace from Syria in what looked like a premeditated action. Putin hit back hard against Erdogan via economic boycott measures against Turkey, but stopped short of declaring war on the country in the aftermath of the incident.

Erdogan clearly understood that he was playing with fire and backed off. He made several comments that indicated that he wanted to douse the flames; but this week, the Turkish regime stepped up its anti-Russian rhetoric once again after the pro-Assad coalition assisted by Russian airplanes succeeded in cutting off a major supply route from the Turkish border to Aleppo, Syria’s largest city. Turkey used this route to supply Sunni rebel groups with arms and money, and there’s evidence that the Turkish secret service delivered aid to Islamic State via this route.

Prime Minister Ahmet Davutoglu, Erdogan’s confidant, accused Russia of randomly bombing civilian targets in Syria and said that Russia will have to pay a price for its behavior in Syria.

“The tyrants who turned Syria, my precious Aleppo and Bayirbucak into a lake of blood will one day definitely pay the price for what they have done. Nobody should forget how the Soviet forces, which were a mighty, super force during the Cold War and entered into Afghanistan, left Afghanistan in a servile situation. Those who have entered Syria today will also leave Syria in a servile way,” Davutoglu said on Tuesday.

Erdogan later accused the Russians of aiding the Kurdish YPG forces in northern Syria. He used friendly Turkish media to spread accusations that Russia was supplying weapons to the YPG militia in northern Syria.

The Turkish regime considers the YPG a terrorist organization because of its ties to the Kurdish Workers Party (PKK) in Turkey, which is a designated terrorist organization according to the U.S. and the EU. Erdogan fears that the recent YPG successes against Islamic State and other Sunni Islamist rebels in Syria will inspire the PKK to step up its battle for autonomy in eastern Turkey.

The regime in Ankara has repeatedly warned that it would not allow the YPG to seize more territory along the Turkish border; yet this is exactly what happened last week when YPG forces took control of Al-Ziyara and Khuraybika—two villages in the Shirawa region of the Afrin Canton a couple of kilometers from the Turkish border. The move could be the beginning of an attempt to connect the other two Kurdish autonomous areas along the Turkish border to Afrin in the north of Syria, Erdogan and Davutoglu fear.

The Turkish leaders thought they were on the winning side in their war against the Kurds after they succeeded in getting the PYD banned from participating in the Geneva talks on a solution for Syria, but now the tide seems to be turning.

So Erdogan turned to the U.S. and issued an ultimatum to the Obama administration: either the U.S. supports the Kurds or Turkey (which is a prominent NATO member).

To drive this message home, Erdogan summoned John Bass, the American ambassador in Turkey, and asked him: “Are you on our side or the side of the terrorist PYD and PKK organization?”

Erdogan told Turkish diplomats during a speech in Ankara this week that the U.S. policy toward the Kurds in Syria has caused a “sea of blood” and had created a domestic security issue in Turkey. He was referring to his war on the Turkish Kurds that he started for electoral reasons in the summer of 2015.

Erdogan then threatened to implement his own solution for Syria.

“On the Syrian problem, which has become a part of our own domestic security, the time has come to implement our proposals for a solution, which everyone finds to be rational and right,” Erdogan said.

This Turkish solution for Syria is limited to the creation of a “safe zone” or “no-fly zone” inside Syria. It is an idea to which the Obama administration paid lip service, but it does not want to implement this idea because of the risk of a direct confrontation with the Russian/Iranian pro-Assad coalition in Syria. For Erdogan, the so-called ‘safe zone’ means a zone without Kurds under direct control of Turkey.

Immediately after issuing the ultimatum, Turkey began to report about Kurdish ‘terrorist’ acts in their border area with Syria, and claimed that the PKK stepped up its terror campaign against Turkish soldiers.

Erdogan also used the plight of the Syrian refugees again to pressure the West into a ban on military aid to the YPG and the Kurdish Peshmerga militia in Iraq. The Turkish president refuses to let thousands of new refugees from the Aleppo area into Turkey and has threatened to flood Europe with the 2.5 million Syrian refugees that already have fled to Turkey.

The ultimatum to the Obama administration and the blackmail with the Syrian refugees are meant to ensure that the West chooses Turkey over the Kurds. However, just like what happened with Putin in December 2015, Erdogan seems to be overplaying his hand and is painting himself into a corner.

Meanwhile, the Obama administration remains silent on Erdogan’s actions and seems embarrassed by his behavior.

After all, this is the guy that Obama saw as his key partner in the fight against Islamic State, and as his chief point man to solve other problems with Islamists in the Middle East. It is only four years ago that Obamanamed “Erdogan, German Chancellor Angela Merkel, Indian Prime Minister Manmohan Singh, South Korean President Lee Myung-bak, and British Prime Minister David Cameron among leaders that he was able to forge ‘bonds of trust.’”