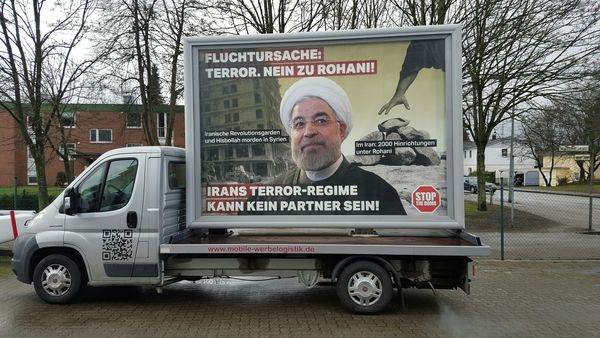 The conflict in Syria conflict and the refugee crisis are central themes at the Munich Security Conference (MSC), which takes place from 12 to 14 February. The European campaign STOP THE BOMB protests with a mobile billboard against the invitation of Iranian Foreign Minister Mohammed Javad Zarif to the Munich Security Conference. With the banner: “Iran’s terror regime cannot be a partner” and “Reason for the Refugee Crisis: Terror. No to Rohani!” the campaign points to Iran’s responsibility for the destruction of Syria and criticizes Foreign Minister Steinmeier’s announcement to invite President Rohani to Berlin.

STOP THE BOMB calls for a policy change towards Iran. Spokesman Michael Spaney criticizes: “The German government’s strategy, to see a partner in the Iranian regime who helps to solve regional conflicts, has failed. Contrary to the hopes of the West, the nuclear deal has not helped to moderate Iranian behavior. On the contrary, Iran, together with Russia, escalates the conflict in Syria. The result is the destruction of the country, the murder of countless people and increasing numbers of refugees in Europe. The refugee crisis cannot be solved without increasing pressure on Iran and Russia.

According to a study of the “Syrian Centre for Policy Research” 11,5 percent of the Syrian people have been killed or injured by the Russian-Iranian intervention in Syria and 45 percent of the population have been displaced. [1]

STOP THE BOMB also criticizes the invitation of president Rohani to Germany. Michael Spaney comments: “A radical Islamic regime cannot be a partner. The Islamic Republic of Iran does not only support Bashar al Assad’s war against its own population, but is also the largest state sponsor of Islamist terror worldwide. In Iran, more people are executed under President Rohani than under Ahmadinejad. What is needed is not appeasement, but pressure on the Iranian regime.”