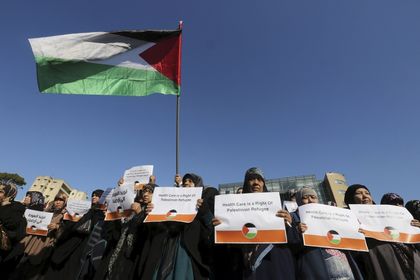 Bravo to the Trudeau Liberals for supporting Tony Clement and Michelle Rempel’s opposition motion to condemn the ‘Boycott, Divestment andSanctions’ (BDS) movement against Israel. BDS is popular on universitycampuses, but most people see it for what it is, a hateful movementtrying to delegitimize the world’s only Jewish state and the MiddleEast’s only democracy.

While it was refreshing to see Prime Minister Justin Trudeau stand up for peace and freedom in Israel, this symbolic gesture came only days after a troubling media report. Apparently, the Trudeau government is looking to provide $15 million in annual funding to the United Nations Relief and Works Agency (UNRWA), an organization that is supposed to provide healthcare, education and social services to the Palestinian people.

Canada funds plenty of UN projects, but this one is different.

Back in 2010, the Conservative government redirected funds away from UNRWA and towards other, more transparent Palestinian aid organizations. The reason was simple: UNRWA had been infiltrated and taken over by an Islamic terrorist group that controls the Gaza Strip.

The vast majority of its 30,000 employees are local Palestinians, while only about 100 are international UN professionals.

This makes UNRWA more of a political party – pushing a political agenda – rather than a neutral international agency. UNRWA’s political stripes are easy to see.

In its local union elections, UNRWA members openly embrace an Islamist agenda and have repeatedly elected a slate of pro-Hamas and pro-terrorism candidates.

Its schools and textbooks have been used to teach young Palestinians a hateful ideology; several academic reviews of UNRWA’s curriculum found that it promotes an anti-Semitic narrative that contradicts peace.

Teachers in its schools have taught students that compromising with Israel is the equivalent of treason, that Jews are villains, and that the Israeli state is both illegitimate and temporary.

The decision to cut UNRWA’s funding was vindicated once again during the summer of 2014, when international journalists documented Hamas rockets being launched from an UNRWA building. Hamas terrorists were intentionally storing weapons and launching rockets from UNRWA schools and hospitals. They were using civilians and children as a human shield against Israeli retaliation.

Following the 2014 Gaza war, it was also discovered that Hamas had been using UNRWA equipment and resources to build tunnels and smuggle weapons to its agents.

As recently as October 2015, the United Nations acknowledged UNRWA’s problem with radicalism and suspended ten employees for inciting violence against Jews on social media.

Far from improving the lives of the Palestinian people, this politicized agency has undermined Palestinian security and jeopardized the stability of the region.

UNRWA is an obstacle to peace in the Israeli-Arab conflict. It must be condemned for this behaviour, not supported by Canadian taxpayers.

In the House of Commons, Trudeau responded to opposition questioning by saying that his government “supports the United Nations in the good work that it does” and “will of course look at all the various things this past government cancelled for political reasons.”

Not every decision made in the last decade was political. Cutting support to a corrupt agency whose funds have been used to support terrorism is not about partisan politics. It is about justice and peace; values that Canadian leaders should embrace and promote.

Trudeau’s symbolic support of Israel means nothing if he also sends Canadian tax dollars to an agency whose resources are used by Hamas terrorists.