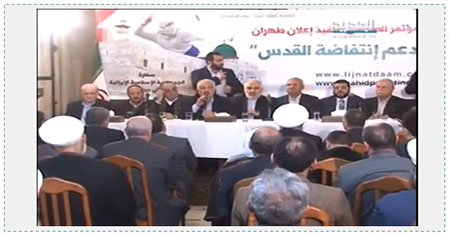 1.   On February 24, 2016, the Iranian ambassador to Lebanon held a press conference in the Iranian embassy where he announced Iran’s intention to give financial support to the so-called “Al-Quds intifada” (the name Hamas has given to the current Palestinian terrorist campaign). Iran will give $7,000 to the family of every shaheed and $30,000 to every family whose house is demolished. The total amount is estimated at about $2 million, so far.[1]

3.   The Palestinian Authority (PA), aware of Iran’s political-propaganda motives, responded with strong anti-Iranian criticism. Nabil Abu Rudeina, spokesman for Mahmoud Abbas, said the PA objected to any attempt to circumvent its authority, and called on Iran to formally transfer the funds to the relevant Palestinian institutions dealing with shaheeds and prisoners. However, Hossein Sheikh al-Islam, advisor to the chairman of the Iranian parliament (the Majlis) for international affairs, made it clear Iran would not transfer the proposed funds through the PA because the PA, he said,had proved itself unreliable.

The Iranians Announce the Transfer of Funds

5.   On February 24, 2016, Mohammad Fateh Ali, the Iranian ambassador to Lebanon, held a press conference in the Iranian embassy where he announced Iran’s support for the “Al-Quds intifada” and the families of the shaheeds. To show its support Iran would donate $7,000 to the family of every shaheed and $30,000 to every family whose house had been demolished by Israel.[3] The money will be transferred through the Palestinian branch of the Iranian Martyrs Foundation[4] (Paltoday, February 24, 2016). Mohammad Fateh Ali claimed the money was intended to help the Palestinian people remain on its land (Website of the Iranian embassy in Beirut, February 24, 2016).

6.   Present at the press conference were representatives of several Palestinian terrorist organizations, including Osama Hamdan, responsible for Hamas’ external relations, and Abu Ahmed Fuad, deputy chairman of the Popular Front for the Liberation of Palestine (PFLP). Osama Hamdan thanked Iran for its support of the Palestinian people. He also said the new Palestinian generation was “a generation of shaheeds,” and embodied a “strategic change” in the struggle against Israel (Paltoday, February 24, 2016).

Iranian Martyrs Foundation and Its Palestinian Branch as Financial Conduits

7.   The Iranian ambassador to Lebanon stated that the funds would be transferred to the families through the Iranian Martyrs Foundation. Hossein Sheikh al-Islam, Majlis advisor for international affairs, made it clear Iran would not transfer the funds through the PAbecause experience had shown the PA was unreliable. He said Iran would shortly transfer the funds “another way,” and did not elaborate. He stressed the ties between Iran and the Palestinian organizations were very close and that Iran would not stop supporting the “Palestinian resistance,” i.e., the Palestinian terrorist organizations (Alresala.net, February 27, 2016).

8.   The Iranian Martyrs Foundation, chosen as the conduit for the transfer of funds, was established by Ayatollah Khomeini to help the families of the dead and wounded in the Iran-Iraq War. It has a Lebanese branch which supports Hezbollah, and a Palestinian branch, also located in Lebanon, which transfers funds to the Palestinians. In 2007 the Iranian Martyrs Foundation and its Lebanese and Palestinian branches were designated as supporters of terrorism by the American Treasury Department because they provided funds for Hezbollah, Hamas and the PIJ.

10.           The PA quickly responded to the Iranian announcement with harsh criticism. It was probably motivated by concern that the Iranians meant to advance their interests in the internal Palestinian arena and might strengthen the PA’s enemies in Judea and Samaria (especially Hamas and the PIJ). Thus “unnamed sources in the PA leadership” told the Lebanese newspaper Al-Mustaqbal that the Iranian ambassador’s announcement was another Iranian attempt to intervene in internal affairs of the Palestinians, like what Iran had already done in Syria, Lebanon, Iraq, Yemen and Bahrain (Lebtime, February 28, 2016).

11. The following were initial reactions of figures affiliated with the PA and Fatah, and relatives of some of the shaheeds:

1)      Nabil Abu Rudeina, spokesman for Mahmoud Abbas, said the PA knew nothing of funds donated by Iran to help Palestinian prisoners or families whose houses had been demolished by Israel.  He stressed that the PA opposed any attempt to circumvent its authority and made it clear that the PLO was the central legal institution of the Palestinian people (Wafa, February 26, 2016). As to the declaration of Sheikh al-Islam that Iran would not transfer the funds through the PA, Nabil Abu Rudeina said it would be preferable for Iran to transfer the funds officially to the [Palestinian] institutions dealing with shaheed and prisoner affairs. He added that the declarations of Sheikh al-Islam were unacceptable from the point of view of international law. He said Iran was intervening in internal Palestinian affairs and not serving the interests of the Palestinian struggle against Israel (Wafa, February 27, 2016).

2)      Jamal Muheisen, a member of Fatah’s Central Committee, called on Iran to provide support for the families only through the PA. Otherwise, he claimed, Fatah’s Revolutionary Council might take strict steps against Hamas (Dunia al-Watan, February 29, 2016).

3)      Abbas Zaki, a member of Fatah’s Central Committee, welcomed Iranian aid and said Fatah thanked everyone who supported the Palestinian people through the PA or any other means (Al-Kofia Press, February 27, 2016). In response the PA rushed to issue a statement claiming that Abbas Zaki did not represent the PA or the PLO, and that the opinions he expressed were his own (Wafa, February 27, 2016).

4)      On February 29, 2016, Israeli TV’s Channel 2 aired a report by Ohad Hamo withthe initial responses of the families of shaheeds to the Iranian proposal. For example, As’ad Ali, the uncle of Muhammad Ali (a terrorist from the Shuafat refugee camp who carried out a stabbing attack at the Nablus Gate in the Old City of Jerusalem) said they welcomed all support, both financial and moral, from whatever source, unconditionally and without limitations. Sheikh Abdallah Alqam, one of the Shuafat refugee camp’s leaders, detained by the Israel Police Force a number of times for incitement, claimed all donations would be welcome, but without conditions.[5] That, he claimed, was because no Palestinian institution had transferred funds to the families. The father of another Palestinian killed in a riot in the Shuafat refugee camp claimed the PA had still not transferred funds to him and that he would not object to any donation of money. 12. Despite the presence of Osama Hamdan, in charge of Hamas’ external relations, at the press conference in Beirut where the announcement of the transfer of funds was made, so farHamas has not yet publicly supported the Iranian proposal. That is because Hamas treads lightly in the intense conflict between Iran and its allies on the one hand, and the Saudi Arabian-led Sunni camp on the other. The problematic nature of over-identification with Iran was evident when Mahmoud al-Zahar, a senior Hamas figure, was interviewed by the Iranian TV channel Al-Ayam. He claimed Iran supported the “resistance” but added that Iran did not condition its support on forcing Hamas to join the “Iranian axis” (Safa, February 28, 2016).

13. Other responses were the following:

2)  The Al-Saberin Movement in the Gaza Strip, affiliated with Hezbollah and Iran, welcomed the declaration of the Iranian ambassador. It praised the support Iran gave to the Palestinian stance against Israel and Iran’s aid for the Al-Quds intifada (Official website of Al-Saberin, February 26, 2016).[6]

[2]In the past the Iranian Martyrs Foundation transferred funds though charitable associations (based on a fatwah issued by Khomeini authorizing charity funds to be used to support the Palestinian struggle against Israel). During 2015 Iran transferred funds to the families of shaheeds in the Gaza Strip through the Al-Ansar Charity Association, affiliated with the PIJ. For further information, see the April 29, 2015 bulletin, “Iranian Support for Palestinian Terrorism: Funds Transferred to Gazan Shaheeds’ Families by Palestinian Islamic Jihad-Affiliated Al-Ansar Charity Association,” Appendix C.

[3]The sum earmarked for the family of every shaheed killed during the current Palestinian terrorist campaign is far greater than what the Iranians paid the 5,000 families of shaheeds in the Gaza Strip killed since the outbreak of the second intifada. According to the Shaheed Foundation, each family received an average of $400. The families of Operation Protective Edge shaheeds (about 2,200) also received about $400. The relatively high sum of $7,000 is intended as an incentive for Palestinians to carry out terrorist attacks and to boost Iran’s political-media interests.

[5]Sheikh Abdallah Alqam is from the Shuafat refugee camp, northeast of Jerusalem. He is chairman of the Clan Reconciliation Committee for greater Jerusalem. He also delivers sermons in the mosques. He was detained a number of times by the Israel Police Force for anti-Israeli incitement. His entrance into the Temple Mount precinct was also prohibited a number of times.

[6]Al-Saberin (the “Al-Saberin Movement for the Victory of Palestine”) is a terrorist organization established in the Gaza Strip in 2014 by PIJ defectors. It is affiliated with Hezbollah and Iran, which apparently finance its activities. On December 16, 2015, it claimed responsibility for attacking an IDF patrol with an IED near the border security fence in the southern Gaza Strip (Website of Al-Saberin, December 18, 2015).