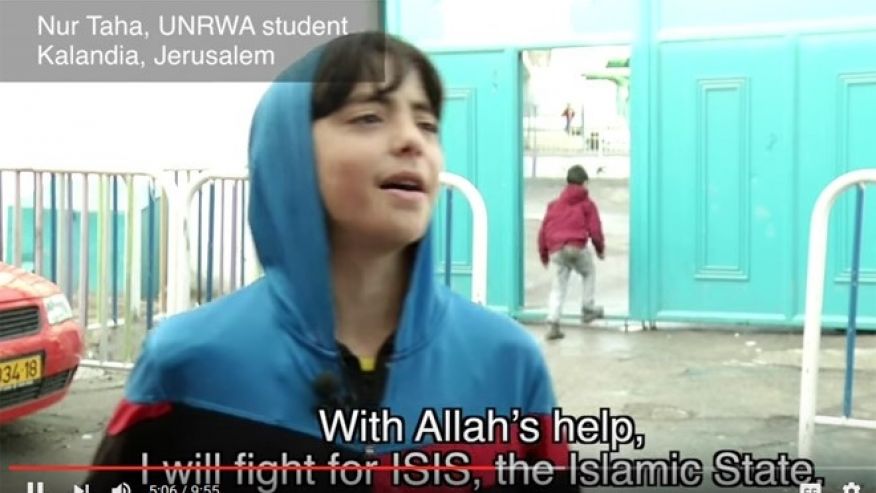 U.S. lawmakers want to cut off funds to United Nations-run schools where a new documentary shows kids as young as 13 declaring they want to kill Jews and join ISIS.

The documentary, “The UNRWA Road to Terror: Palestinian Classroom Incitement,” shows children as young as 7 in schools run by the United Nations Relief and Works Agency (UNRWA) expressing support for terrorism. One clip shows a 13-year-old Palestinian student chanting “With Allah’s help I will fight for ISIS, the Islamic State.”

Members of Congress and sources with knowledge of pending legislation told FoxNews.com that lawmakers are looking to introduce bills cutting off funding from such schools before Congress adjourns this summer.

“It is a crime against humanity, an outrage, and does not in any way prepare the Palestinian population or future generations of Palestinians for peace with Israelis,” Lamborn told FoxNews.com. “It is unacceptable that the international community, including the United States, is funding UNRWA without demanding change.”

According to State Department figures, the U.S. provided $390 million to help fund UNRWA in 2015.

Israeli officials have pointed to links between Palestinian calls for violence and the murders.

“We have to make war to prove we are stronger than the Jews,” said a 7-year-old girl who is shown in the film saying the line in the classroom of a UN school in Jerusalem.

“Right now I am prepared to be a suicide bomber,” says a 13-year-old shown in the film at another UN school.

Another student, who is identified in the film as a 10-year-old who goes to a UN school in Bethlehem, is shown saying, “We need to take steps to kill them, and they will retreat and we will advance.”

Documentary producer David Bedein told Fox News that he and his organization, Center for Near East Research have been researching UNRWA for nearly 30 years. He linked the content of the film to the potential Congressional push.

A leading Palestinian human rights expert told FoxNews.com that the film was accurate.

Gunness said that Bedein had mixed up UN schools with other Palestinian schools where incitement may occur, but which are not run by the UN.

“He shows teachers claiming they are UNRWA teachers when in fact they are not and he plays the same tricks with students, often misrepresenting what they say in slanted translations.”

But Gunness added “UNRWA uses the same curriculum as the PA and the Israeli Education Ministry” for schools in the West Bank and parts of Jerusalem. He emphasized that textbooks in question had been “found to be largely free of incitement” in U.S. State Department studies.

Gunness also told Fox News that the students had been intentionally led with questions such as “how much do you hate Jews?”

A State Department spokesman said the department had called on UNWRA to investigate the allegations made in the film.

“We’ve looked into the allegations contained in the referenced film and discussed with UNRWA the need for the agency to do the same,” the spokesman explained.

Echoing UNRWA’s sentiments, the State Department spokesman also claimed that “allegations raised by this individual filmmaker in the past have been debunked.”