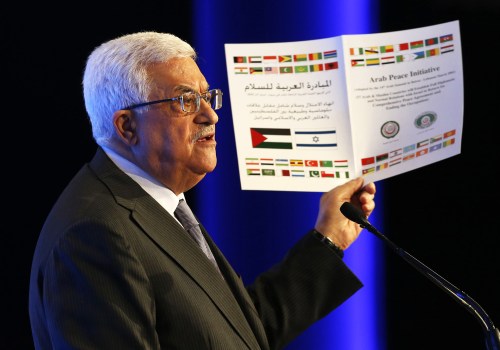 The murderous bombing attack by the ISIS organization against a Jordanian outpost at the junction of Jordan’s borders with Iraq and Syria reinforces Jordan’s new needs in dealing with the Palestinian problem. The closing of the borders with Syria and Iraq illustrates Jordan’s inability to agree to a hostile border with the Palestinians, hence the need to preserve the IDF as the friendly neighbor along the length of the Jordan River and not replace the IDF with Palestinian militias.

Against this background, it is necessary to appreciate the meeting held last week in Amman between King Abdullah and Palestinian Authority Chairman Mahmoud Abbas over the end-of-Ramadan Iftar dinner. After the expulsion of the Jordanian dignitaries from Al-Aqsa Mosque compound in Jerusalem by Palestinians several months ago, the King refused to see the Palestinian leader. According to Palestinian sources, King Abdullah told the Palestinian Authority head that Saudi Arabia wants to make changes in the Arab Initiative so that Israel could accept it, and that it is better for the Palestinians to agree and not oppose the action. According to these sources, Abu Mazen sought to learn the nature of these changes, but King Abdullah told him that things have not yet been agreed upon.

Later, Abu Mazen met with Saudi King Salman in Jeddah; from the silence after the meeting, it can be assumed that a similar dialogue took place.

The sources reported that after his return from his current European tour, Abu Mazen will convene the PLO institutions to brief them on the new situation, but the sources estimate that the Palestinians will be unable to agree to any change in the Initiative from the current version which demands withdrawal to 1967 borders and, in effect, fulfilling the Right of Return.