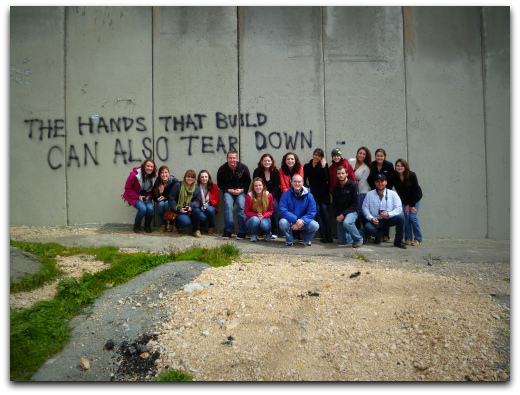 Every year, there is a myriad of overseas visitors to Israel and the Palestinian Authority (PA) who, at any given point in the year, take part in some organized program of subtle anti-Israel political indoctrination.

My own observations and calculations lead me to believe the total number of these tourists reaches into the tens of thousands and is likely to be growing.

The “they” in this case could have been a speaker from Palestinian Authority-based institutions such as Bethlehem Bible College, the YMCA – East Jerusalem, the Siraj Center for Holy Land Studies in Beit Sahour, or the Sabeel Ecumenical Liberation Theology Center; or perhaps a foreign-based organization such as Interfaith Peace Builders (American), Christian Peacemaker Teams (American), World Vision (British); or even a representative of any of a number of politically left Israeli (Jewish ) NGOs (non-government organizations) that promote the Palestinian narrative, such as B’Tselem, Peace Now or Rabbis for Human Rights. “They” told us, so it must be true.

This student is but one of the myriad overseas visitors to Israel and the Palestinian Authority (PA) who, at any given point in the year, take part in some organized program of subtle anti-Israel indoctrination. Collectively, these activities constitute an invisible industry of lies and deceit. Invisible because they arouse virtually no attention, including the attention of the Government of the State of Israel. These programs represent the independent efforts of many organizations and are not coordinated or run by a central body. All the organizations that are involved, however, share one fundamental objective, and that is to proselytize the message that “the Palestinians are an oppressed people and the State of Israel is the oppressor.”

This industry has operatives throughout Western countries who carry on its work overseas, particularly on college campuses where their activities help fuel the BDS (Boycott, Divestment and Sanctions) Movement. They also find homes in many church-affiliated institutions, and in doing so are able to target a wide age range. An important part of this work consists of recruiting people who will fly to Israel as part of a group, take part in an “educational” program based on a carefully chosen roster of lecturers and visits, enjoy ample Palestinian home hospitality , and when it is all over, hopefully return home and become locally active on behalf of the Palestinian national movement.

The NGO Monitor website describes one of the most active among the Palestinian Authority-based propaganda organizations, Holy Land Trust, as follows:

It “conducts highly politicized tours promoting the Palestinian narrative and targeting church leaders and the international community, claiming to provide ‘cross cultural and experimental learning opportunities in both Palestine and Israel.’ Suggests that its participants ‘limit information’ given to Israeli airport security and hide the reason for their visits.

The Holy Land Trust’s sophisticated and aesthetically attractive website boasts a variety of programs. This summer HLT is sponsoring the 13th Annual Summer Encounter that targets a college-age population. Wherein lies the deception? From reading the description of the program from the website, one is likely to believe that the Summer Encounter is an innocuous, even apolitical, one or two-month volunteer community service program that offers an opportunity for learning Arabic. In fact, the program is peppered with experiences that clearly promote the message that Palestinians live under a cruel and unjust Israeli occupation.

For example, a visit to Israel’s Yad VaShem Holocaust Memorial Museum in Jerusalem, a visit one might think is used to create some empathy with the experience of the Jewish People and the rationale for the creation of the Jewish state, is in fact used as a basis for comparison with the Aida and Dheisheh refugee camps in the Bethlehem area. This visit has, on occasion, engendered the inane question “How can you Jews do to the Palestinians what the Nazis did to you?”

Because this is an “invisible industry” there is no way of knowing how many overseas visitors participate in these programs each year. Israel’s Ministry of Tourism does not keep track of tourists who enter the country and later cross the 1949 Armistice Line (the “Green Line”) to spend time traveling in the Palestinian Authority. My own observations and calculations lead me to believe that their total number reaches into the tens of thousands and is likely to be growing.

Who are these people and why do they come? With over twenty years of experience addressing these types of groups in my community of Efrat, I have learned that within a typical group of some 20-30 participants, approximately 10% arrive with an existing political bias that favors the Palestinian narrative; another approximately 10% have, literally, just come along for the ride. They relate to the trip as a Middle-East vacation experience and have no idea of what awaits them.

That leaves about the 80% in many groups who arrive in Israel as “fence sitters.” This is to say that even if their political world view leans left, they could not, upon arrival at Ben-Gurion Airport, be considered anti-Israel, anti-Zionist and definitely not anti-Semitic. Most are generally ignorant or confused concerning the historical details surrounding the protracted Arab-Israeli conflict, including the conflict with the Palestinian Authority. In fact, in many cases, these individuals’ greater awareness of the conflict only begins to take shape in the weeks before departing home, the result of reading a number of books and viewing a number of Internet sites, all with a clear pro-Palestinian bias, that were recommended by their tour sponsors.

This 80% is the prime target population of the program organizers. Ignorance or naiveté combined with a good heart are the characteristics that allow these programs to mold these participants by exposing them to certain experiences while denying them others. In addition, these groups are repeatedly exposed to a politicized lexicon centered on words such as “occupation,” “resistance,” “injustice,” “apartheid,” “genocide.” Historical facts are either blurred, perverted or invented. By the time their program ends and they leave Israel, some participants would now openly acknowledge having become anti-Zionist.

How does this transformation come about, and in such a relatively short amount of time? More than targeting these visitors’ minds, these programs target their hearts. The people who develop and operate these programs, the “captains of this industry of deceit,” learned long ago that if you first capture peoples’ hearts, their minds follow. Once participants have been emotionally won over to the Palestinian cause, through home hospitality, interactions with children, visits to the injured, and joining in festive family celebrations, they have no interest in questioning the veracity of the dubious “facts” they are presented.

That is why when this Christian college student was told that “Israel steals the water from the Palestinians,” she accepted the statement as fact. If she was also told “Israel steals oxygen from Palestinian airspace,” I am certain that she would have believed that as well.

The author, Ardie Geldman, is the founder and director of iTalkIsrael (www.iTalkIsrael.com). He is a professional public speaker, author and educational guide who advocates for Israel from Efrat, a Jewish community adjacent to the Gush Etzion region, 15 minutes south of Jerusalem. He may be reached at ardie@italkisrael.com.