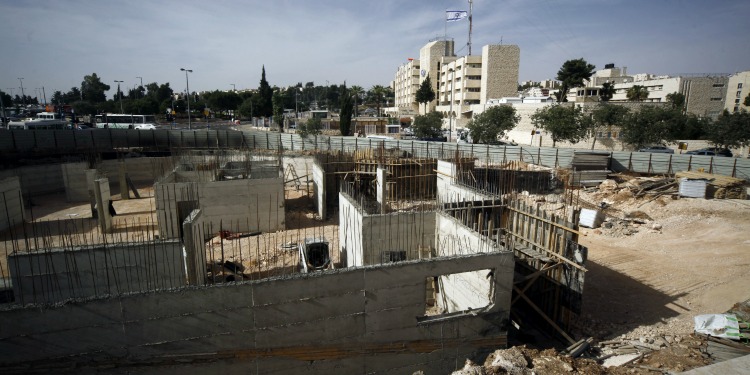 Facebook
Twitter
Pinterest
WhatsApp
On Monday, UN Secretary-General Ban Ki-moon predictably assailed Israel’s announced decision to build 800 new apartments in Ma’aleh Adumim and eastern Jerusalem. He noted that just four days earlier, the Middle East Quartet (i.e. the U.S., EU, UN and Russia) had issued a report deeming settlement construction an obstacle to peace. What Ban didn’t mention is that just a few days before that report came out, a leading Israeli leftist expert on the settlements published a comprehensive rebuttal of this claim, providing facts and figures showing that the settlements effectively aren’t growing at all.

Shaul Arieli, who published the rebuttal in Haaretz last week, is hardly an apologist for the settlements. Since retiring from the army as a colonel in 2001, he has become a prominent peace activist. He helped produce the Geneva Initiative, a nongovernmental template for an Israeli-Palestinian peace agreement. He’s on the board of the Council for Peace and Security, a group of former security officials that advocates for a peace deal. He has been involved in numerous legal cases challenging the West Bank security fence. He gives lectures and tours on the feasibility of a peace agreement, and he’s considered a leading expert on demarcating a future Israeli-Palestinian border.

Nevertheless, Arieli has no patience with those who keep predicting that settlement construction will doom the two-state solution if it hasn’t already. His view is expressed unambiguously in the article’s title: “Look at the Figures: Israel’s Settlement Enterprise Has Failed.”

First, he noted, though the settlement population is growing faster than the general Israeli population, “In 2015, as in the preceding five years, almost 90 percent” of this increase was “a result of natural population growth,” meaning people having babies. In other words, though the number of individual settlers has grown, the number of families–the relevant figure for anyone considering evacuating settlements–has remained virtually unchanged. In fact, the number of people moving to the settlements has plunged to a mere third of what it was when Benjamin Netanyahu began his first term as prime minister in 1996.

Moreover, Arieli wrote, “Last year, as in all the preceding 40 years, 75 percent of the population growth occurred in settlement blocs.” In short, almost all the increase, from both births and migration, is happening in a handful of settlements near the Green Line that every peace plan ever proposed has agreed will remain Israeli. Thus it hasn’t affected the prospects of a two-state solution at all.

But while Arieli’s facts are indisputable, his explanation for why settlement growth has stagnated obscures an important truth. In his view, it’s because Israelis “are voting with their feet” against the settlements, despite “the efforts invested by Benjamin Netanyahu’s current government in consolidating the settlement enterprise.” In reality, however, nobody knows what Israelis would do if given a choice because, for the last seven years, they haven’t had one. Nobody will move to the settlements if there are no houses to move into. As data from Israel’s Central Bureau of Statistics unambiguously shows, since taking office in 2009, Netanyahu has built far fewer units in the settlements than any of his predecessors. True, he periodically announces grandiose building plans, as he did this week. But most are quietly frozen again immediately afterward; very few ever get built.

And this entails real costs for Israel. First, Israel has a desperate shortage of affordable housing within commuting distance of the center of the country, where most of the jobs are. Indeed, when young people who have left or are considering leaving Israel are asked why, their number-one answer is the lack of affordable housing. But since the major settlement blocs are all in commuting distance of the center, more construction there would significantly ease this shortage. Consequently, seven years of near-zero settlement construction have done serious damage to an essential Israeli interest.

Second, as journalist Nadav Shragai correctly noted last week, Palestinians interpret Israel’s failure to build as proof that Israelis have little attachment to the land. And if they aren’t attached to the West Bank–the Jewish people’s historical, cultural and religious heartland–then they surely aren’t attached to pre-1967 Israel, which has shallower Jewish roots, the Palestinian thinking goes. This, in turn, encourages the Palestinian belief that there’s no need to make peace with Israel, because it will disappear on its own in another few decades–an opinion held, astoundingly, by over 85 percent of Palestinians.

Finally, Israel’s fear of building in the West Bank and eastern Jerusalem reinforces the international narrative that this is occupied Palestinian territory rather than disputed territory to which Israel has a valid claim. For someone unfamiliar with either the facts behind Israel’s claim or Jewish psychoses about upsetting non-Jews, it’s quite reasonable to conclude that Israel wouldn’t act so fearfully and guiltily about building there if it really believed its own claim to the territory. And someone who thinks Israel is a thief occupying stolen Palestinian lands will naturally be more anti-Israel than someone who understands it is offering to cede its own land for the sake of peace.

As Arieli himself noted, building in the settlement blocs and Jewish neighborhoods of eastern Jerusalem doesn’t endanger the two-state solution in any way. And these are the very places where construction would be most helpful in alleviating Israel’s housing crisis. Thus it’s long past time for Israel to resume building there. There’s no reason for it to keep paying the price of curbing settlement construction if its restraint earns it no international dividends.

The Truth About Settlement Growth