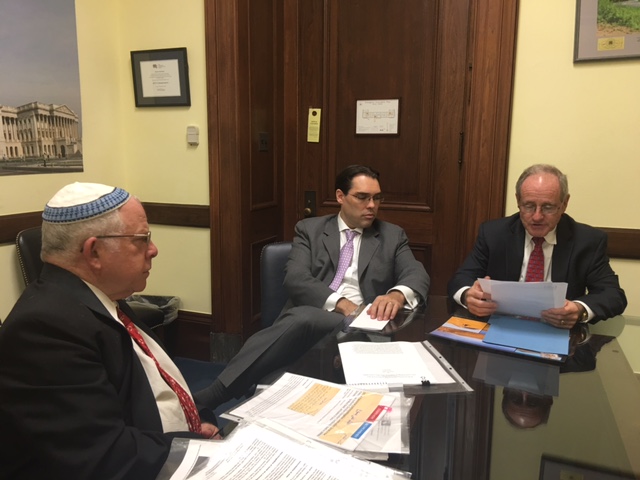 Senator James Risch (R-Idaho), chairman of the US Senate Near East Subcommittee of the US Foreign Relations Committee, disclosed on Tuesday, Sept. 13 in a meeting with Center for Near East Policy Research Director David Bedein that his office had made an official request in June of the GAO, the US General Accounting office, for an investigation of the alleged involvement of terror groups with UNRWA education.

The US donates $400 million year to UNRWA, one third of the UNRWA budget, serving five million descendants of Arab refugees from the 1948 war, who have dwelled in and around 59 UNRWA refugee camps in Lebanon, Syria, Jordan, Judea, Samaria, Jerusalem and Gaza ever since.

The GAO replied on July 21 that it had received the request from Senator Risch, and that it would act upon it.

Senator Risch had not disclosed his correspondence with GAO until this meeting.

Bedein flew in from Israel to brief Senator Risch that no change the UNRWA education system had taken place with the launch of the new school year.

Senator Risch had been assured by the highest levels of the US government that the US had reviewed and vetted the school books used in UNRWA schools.

However, Bedein brought evidence to the attention of Senator Risch that USAID made no pretense of reviewing school books used by UNRWA, nor does the US vet UNRWA school teachers in areas controlled by the PA to determine if UNRWA educators are members of terrorist organizations. UNRWA does “terror vet” their teachers who are in their employ in Lebanon, Jordan and Syria.

Following files were background pieces to Bedein presentation to Senator James Risch (R-Idaho) and his legislative director, Chris Socha, in addition to: